A weak cold front will pass through the area, without rain, by Saturday morning. The parched pattern may finally have an end in sight, though.

Next 24 Hours: With the approach of a cold front, some shallow moisture in the atmosphere will allow for clouds to fill in skies overnight. As is typical, temperatures will spike ahead of the boundary, and lows will be considerably higher than previous mornings with most locations in the mid 60s. Clouds will exit from northwest to southeast on Saturday giving way to mostly sunny skies. The temperature turnaround behind the cold front is not substantial and highs will still hit the mid 80s. LSU fans should be reminded to apply sunscreen before a day game in Tiger Stadium.

Up Next: Overnight temperatures will return to the 50s Saturday night into Sunday. The second half of the weekend will come in a touch cooler with thermometers in the low 80s on a clear Sunday afternoon. Monday and Tuesday will continue seasonable, if not moderating temperatures. Southeast winds will allow deeper moisture to build by the middle of next week. As a cold front nears the region on Wednesday and Thursday, it is very likely that a 30+ day stretch without rain will come to an end. CLICK HERE for your detailed 7-Day Forecast. 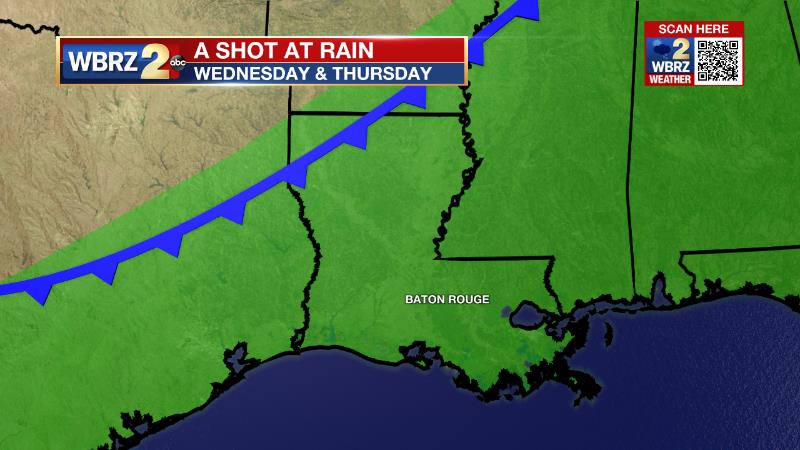 The Tropics: As of 4pm Friday, Tropical Storm Julia was moving west across the southern Caribbean Sea at 18mph with maximum sustained winds of 40mph. With gradual strengthening expected, the western motion will continue until landfall as a hurricane in Nicaragua on Sunday. Due to the higher terrain there, significant flooding will be the primary threat. 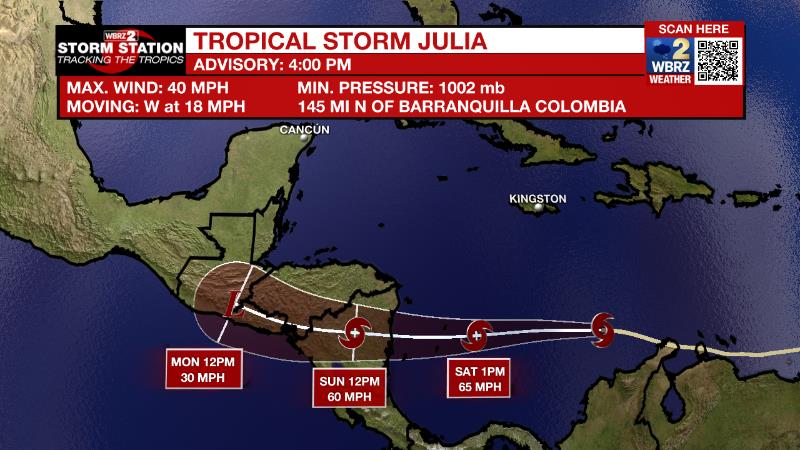 The Explanation: A weak cold front will move toward our region overnight. Without a high quality moisture return and the weak nature of the system, rainfall is not anticipated. With that dry frontal passage on Saturday, temperatures will trend down just a bit. Temperatures will be about 1-3 degrees below average Sunday and Monday. Moderation is expected Monday afternoon as a weak upper level ridge builds over the region providing sinking air and therefore rising low level temperatures. Some moisture will creep into the atmosphere on Tuesday in traditional top down fashion with cirrus clouds building in from the west. Confidence is beginning to increase in the prospect for some rain late next week. An upper level trough of low pressure will broaden and deepen as it moves over the eastern United States sending a cold front toward the Gulf Coast. All indications are that there will be ample time for southerly winds to advance moisture into the atmosphere for this system to trigger showers and thunderstorms on Wednesday and Thursday ahead of a frontal passage.