Look for a two to three day stretch of unseasonably dry air across the Capital Area. Low temperatures may challenge records on Thursday morning.

Today and Tonight: The much anticipated, unusual late July cold front has passed by to the south and a drier air mass has settled into the region. It will still be a warm afternoon with high temperatures climbing into the mid 80s, but humidity will not be nearly as oppressive. Any morning clouds will give way to sunny skies by afternoon. A comfortable night is ahead with clear skies and low temperatures in the mid 60s. The record low for the date is 64 degrees. 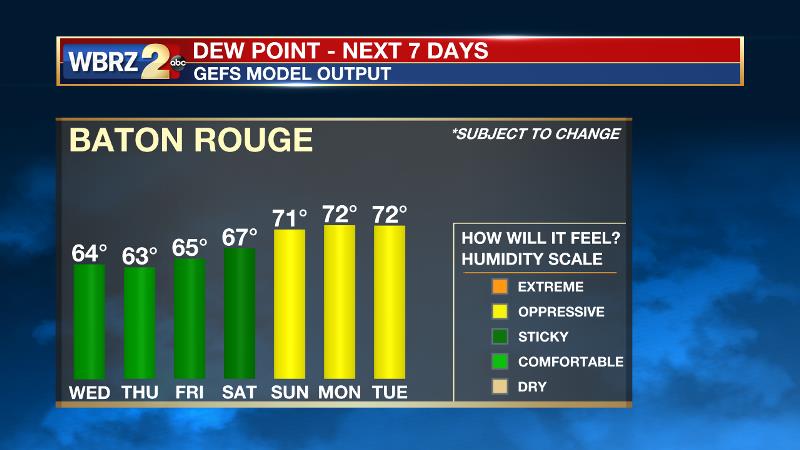 Up Next: Thursday afternoon will repeat with sunshine and highs in the upper 80s. Steam and rain chances will come back by Saturday. Along our friendly, old front, a low pressure system could develop by the weekend. This low could acquire some tropical characteristics and fling added moisture for rain to parts of the central and eastern Gulf Coast. This does not appear to be a major threat right now, but is something to monitor.  See THE TROPICS and THE EXPLANATION for further details. 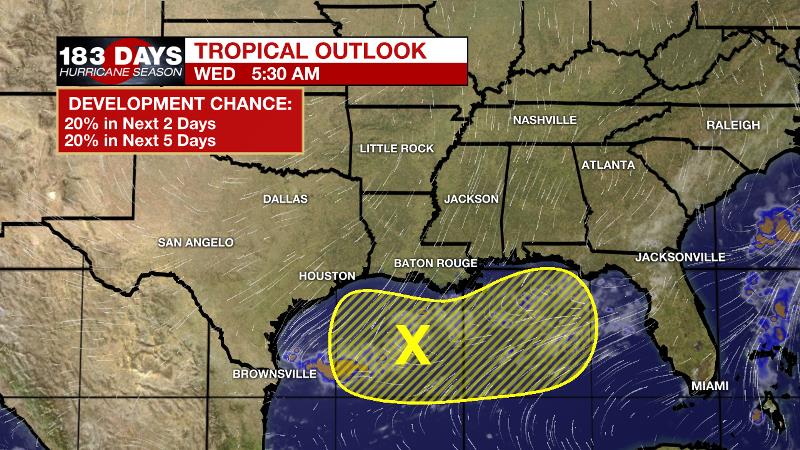 The Tropics: Disorganized showers and thunderstorms are occurring in the northern Gulf of Mexico along a decaying front. A non-tropical low pressure is expected to form along the boundary by Thursday. Environmental conditions could support some subtropical or tropical development later this week while the disturbance meanders near the central Gulf Coast. The National Hurricane Center gives a 20 percent chance of tropical development.

The Mississippi River at #BatonRouge has just fallen out of "major" flood stage for the first time since Feb. 26. Thursday will mark 200 days above flood stage, absolutely shattering the previous record. The gauge should be below flood stage by Aug. 7. pic.twitter.com/BSrd2NSLnO

The Mississippi River: At Baton Rouge, major flood stage continues with a level of 39.9’ as of Wednesday morning. This marks the first time Big Muddy has fallen out of major flood stage since February 26. Peaking at 44.1’ on March 19, the river set its 7th highest recorded crest at Baton Rouge. At 199 days, this year marks the longest period above flood stage at Baton Rouge. The level will slowly fall, but is likely to stay above flood stage for several weeks to come. The high water will remain an issue for river traffic and river islands, although some inundation will continue for unprotected low-lying areas. The city of Baton Rouge and the main LSU campus are protected by levees up to 47 feet. Some soggy areas and seepage may be noted due to the long duration of high water placing pressure on the levees. As some of the Mississippi River diverts into the Atchafalaya River, gauges at Krotz Springs and Morgan City will stay high as well. This creates backwater flooding in parts of Assumption Parish in areas such as Bayou Chene, Stephensville and around Lake Palourde.

With dew points back into the 60s, a much more comfortable air mass has taken hold of the region. Afternoon highs will still warm into the upper 80s, so it will not feel “cool” but at least the humidity will not be oppressive. North winds will maintain the drier air through Thursday. Onshore flow will be restored by the weekend with seasonable humidity and rain coverage back in play. 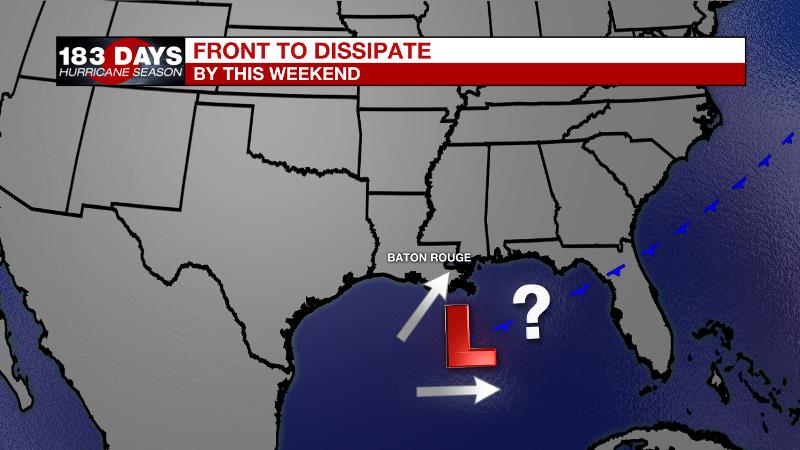