Some of the coldest air in 20 to 30 years is expected in the Great Lakes Region by the middle of next week. Computer forecast model guidance is agreeing on low temperatures below -10° with some numbers as extreme as -30° showing up for big cities like Minneapolis and Chicago. In addition to the cold air, blustery winds may create wind chills in the range of -40° to -60° Wednesday into Thursday.

The last time Minneapolis registered a low temperature below -24° was 2004 and the last time the mercury plummeted to -30° or lower was 1996. In Chicago, -30° has never been recorded and -24° was met in the bitter winter blast of 1985—a cold snap that is being reference for comparison to this upcoming event. 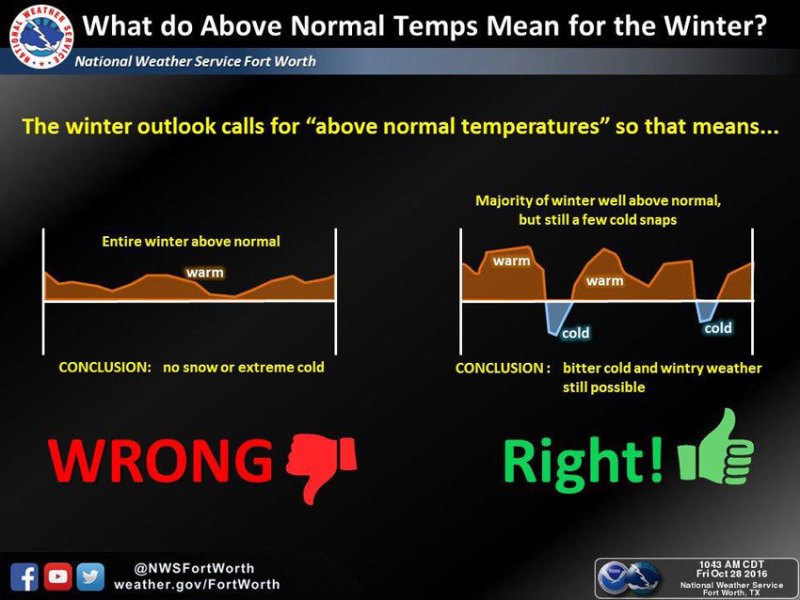 This may lead some to say, “whatever happened to that good old…” well, you can finish the sentence. In statistical fact, these episodes are becoming less frequent with climate change. It is also important to remember the newly popular phrase among forecasters that “weather is not climate.” Using the graphic from the National Weather Service in Fort Worth, Texas as a guide, realize that above average or increasing temperatures is about a trendline in the climate of an area. Climate is the long-term weather of a specific area over a time scale of months, years and decades. Weather is the short-term state of the atmosphere, subject to much greater fluctuation over a time scale of hours, days and weeks.

While dangerous cold is not needed by anyone, low temperatures and ample snowfall are important to a healthy economy. Skiing, snowboarding, snowmobiling, tubing and other winter recreation — are part of an industry that contributed more than $20 billion to the national economy in the 2015-2016 season. These conditions are under threat from warming winters, according to a new report from Climate Central. 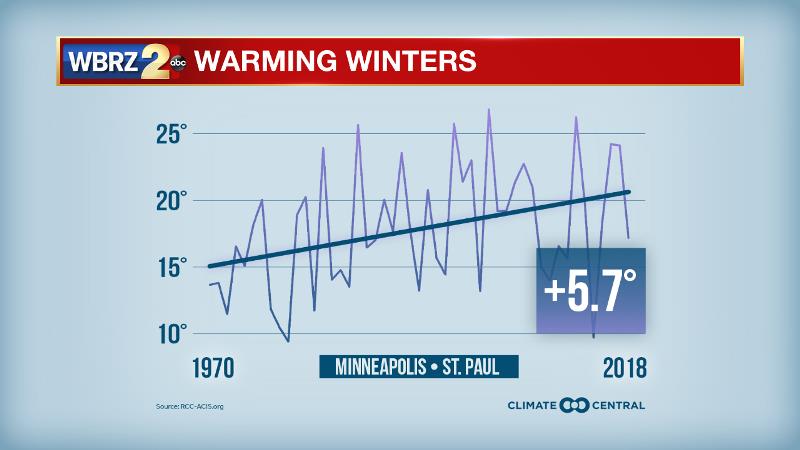 A common theme in climate change trends is more drastic warming across the middle and high latitudes. Minneapolis is one location that has experienced substantial warming over the last 40 years. The warming is affecting regional snowfall patterns differently, but from the 1970s to 2010s, 57 of the 107 analyzed weather stations saw the average annual snowfall trend downward by at least an inch. The biggest losers were Flagstaff, Arizona; Salt Lake City, Utah; and Casper, Wyoming — all historically snowy Western cities that are getting drier overall. Since the 1970s, annual snowfall has dropped by a total of 48, 31, and 29 inches in those cities, respectively.

However, warming of the Great Lakes has hindered ice formation and increased the evaporation that fuels lake effect snow. Annual snowfall totals in Marquette, Michigan; Erie, Pennsylvania; and Youngstown, Ohio have climbed by respective totals of 68, 33, and 30 inches in the last half-century. Trends have also climbed more than 10 inches in Northeastern cities like Philadelphia, Boston, and New York, as a warmer atmosphere leads to more heavy precipitation events where it is still cold enough to support snow. Still, future warming will mean fewer days below freezing and more rain than snow, as shown in our 2016 report, “Meltdown.”

Snow-friendly temperatures are declining across the country. In the last half-century, winters have warmed by more than 2°F in 78 percent of the 244 cities analyzed. Seventeen cities have warmed by more than 5°F, led by a 7°F increase in Burlington, Vermont. And according to Climate Impact Lab, every state in the contiguous U.S. will see fewer days with below-freezing lows by midcentury, shortening winter recreation seasons.

Reducing our greenhouse gas emissions would limit these effects. In Colorado, the nation’s top winter sports economy, unchecked emissions would cause 34 fewer below-freezing days per year by the 2040-2059 period, compared to the 1981-2010 average. But if the world meets its Paris Agreement pledges to reduce emissions, Colorado could save 8 snow-friendly days per year. For the state’s 43,000 winter recreation jobs, a salvaged week could make a major difference. 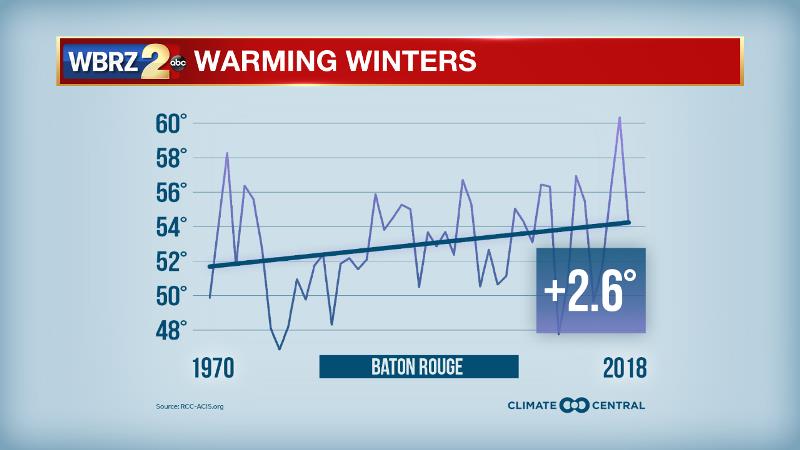 Of course, the increase in winter temperatures has a less drastic impact on the Gulf Coast economy as winter recreation is a much smaller part of revenues. In fact, milder winters may even assist industries like crawfish farming. Baton Rouge averages about 20 episodes of freezing temperatures each winter. So far this season, there have been 6 as of January 24.

Methodology: Average winter (December through February) temperature and total annual (July through June) snowfall trends were calculated for 1970 to 2018 using data from the Applied Climate Information System. Local snowfall trends were calculated for stations with at least 10 inches of average annual snowfall, fewer than 10 percent of missing daily data, and at least five years of data in both the first and last decades of the study period (criteria based on Kunkel et al. 2009). The projected number of days with a minimum temperature below 32°F (under RCP 8.5 and RCP 4.5) are multi-model averages obtained from the Climate Impact Lab. More information about the methodology can be found on their website.