An active weather pattern is expected over the next several days. Fog may be an issue for coastal areas through Wednesday morning. Finally, the possibility of isolated strong thunderstorms will need to be monitored as a cold front kicks through the area on Wednesday night.

Today and Tonight: Fog will linger along the coast to begin Tuesday, but the afternoon conditions will end up similar to Monday. It will be warm and muggy with high temperatures in the mid 70s and scattered showers—perhaps just a little less coverage than on Monday. A peek or two of sunshine could nudge some thermometers up to 80 degrees. Fog is likely to return overnight with low temperatures in the upper 60s.

Up Next: A cold front will move into the region on Wednesday night, set to remove the unsettled weather by Thursday night. Prior to this, much of Wednesday will be quiet, although cloudy and muggy. A squall line is expected to form, pushing rain and thunderstorms into the Baton Rouge area Wednesday evening into early Thursday morning. 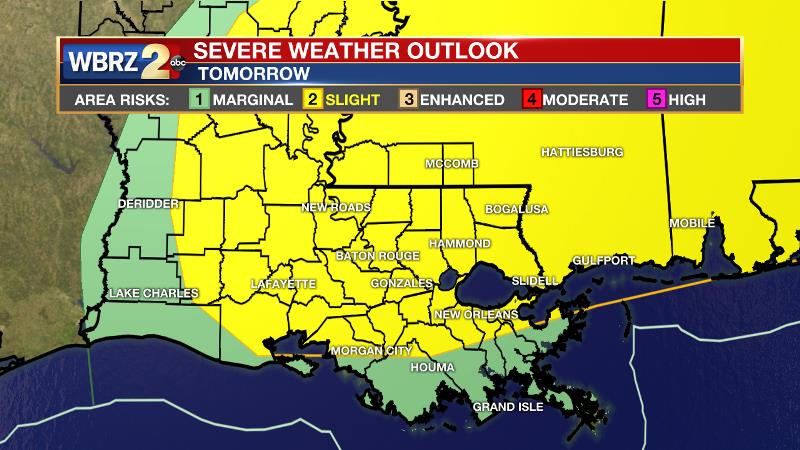 The Storm Prediction Center has issued a 2 out of 5, “slight risk” for severe weather in our forecast area due to the possibility of isolated damaging wind gusts along the line. Showers will end from west to east on Thursday morning with cooler and drier conditions moving in to end the week.

An upper level trough over the Southwestern U.S. will dictate the local weather through the middle of the week. A stalled front located from Jackson southwest to Alexandria into eastern Texas will continue to be a focus for the development of showers and thunderstorms north of the local forecast area. Locally, scattered is the key word and the day will not be washout. With a slight ridge developing in the upper level flow, some brief clearing could occur in clouds during the afternoon hours and this could send a few thermometers into the upper 70s and low 80s. The upper level trough will start to advance northeastward into the Midwest later Tuesday allowing and then business will start to pick up on Wednesday. The upper trough will race from the Midwest to Great Lakes Region through the day. A strong southwesterly jet stream aloft is expected on the eastern side of this trough. A surface low is expected to develop along the Texas Coast in response to the advancing trough, driving a warm front northward across the central Gulf Coast. During the late morning and afternoon hours Wednesday, showers and thunderstorms will develop over western Louisiana. Ongoing high dew points and warming temperatures into the afternoon will encourage continued development eastward as the upper level winds increase over central Louisiana and southwest Mississippi. 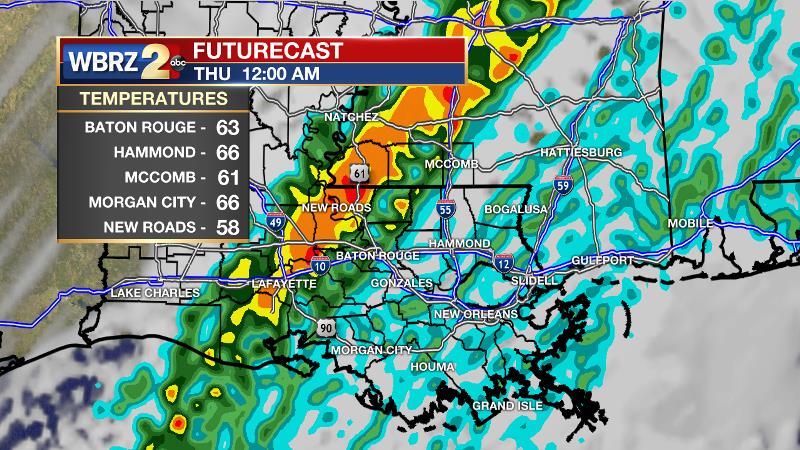 A line of thunderstorms is expected to develop by the evening hours and charge east across the Baton Rouge area with a chance of a few strong thunderstorms. Along the line, damaging wind gusts would be the most likely threat, but as is usually the case, any cells that develop ahead of the line could also produce a tornado. Much cooler and drier air is expected after the cold front moves through on Thursday morning. Quiet conditions will persist through Saturday.