Busy day of storms ahead, weekend 'cast depends on Cristobal

Look for an active round of rain and thunderstorms for the middle of the week. Forecast focus remains on the possibility of heavy rain if Tropical Storm Cristobal moves through the area late in the weekend.

Today and Tonight: Wednesday will be much more active in terms of showers and thunderstorms. Once temperatures break into the middle 80s by lunchtime, action should readily develop and become widespread through the afternoon hours. Traditional with warm season storms, some street flooding could be an issue along with frequent lightning and gusty wind. Activity will ease after midnight with lows in the low 70s.

Up Next: The workweek will end with the standard warmth and humidity followed by pop-up afternoon showers and thunderstorms. By the end of the weekend, the local forecast will depend on Tropical Storm Cristobal, which could spread rain and wind over a portion of the central Gulf Coast. While specifics remain limited, there has been enough consistency in the forecast guidance to suggest that a tropical storm landfall in Louisiana is a possibility. Especially for those with coastal property, now would be a good time to take precaution for elevated tides and wind. Now through Tuesday, 2-5 inches of rain will be possible, but as we have seen repeatedly on the Gulf Coast, there tends to be a small spot or two with much higher amounts.

JUST IN: the latest on #Cristobal, more storm information can be found here: https://t.co/xrX4u6a9Zl pic.twitter.com/XYQh5UK3vq

The Tropics: As of Wednesday morning, Tropical Storm Cristobal was producing 60mph winds and heavy rain over the Bay of Campeche and southeastern Mexico. Cristobal will drift into Mexico on Wednesday and the land interactions will weaken the storm. The length of time over land will be significant as to how much weakening actually occurs. Eventually, some semblance of a tropical system is expected to reemerge over the Bay of Campeche or Gulf of Mexico. 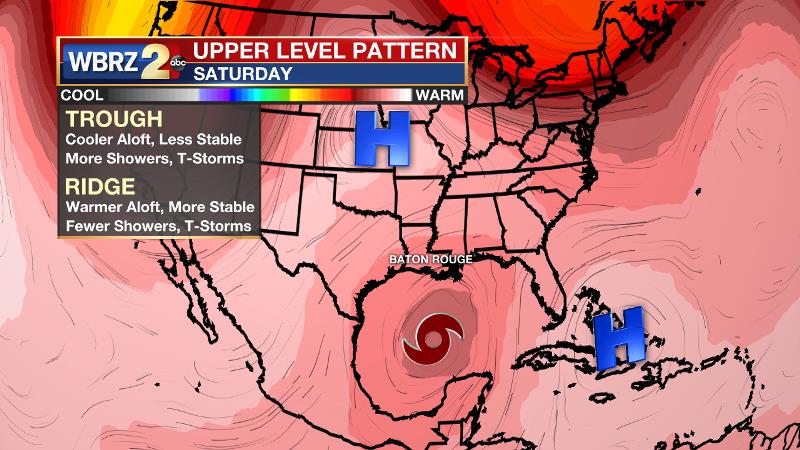 An upper level ridge of high pressure will be responsible for steering the storm north through the Gulf of Mexico. A secondary ridge over the Lower Midwest is beginning to look like less of a factor in driving the storm farther west. Despite accelerating northward, there will be some time for Cristobal to strengthen and a tropical storm could make landfall along the central Gulf Coast Sunday or Monday. Still, with uncertainty remaining over the time spent inland and the speed through the Gulf of Mexico, details will yet become clearer over the coming days.

As an upper level ridge moves farther east on Wednesday, a shortwave trough of low pressure will move overhead. That, combined with southeasterly surface winds and abundant moisture will create more robust convection. Widespread showers and thunderstorms will develop and the moisture-loaded atmosphere could lead to downpours and frequent lightning. Moisture may decrease slightly for Thursday and Friday, but an inverted trough of low pressure, tied to Tropical Storm Cristobal in the southern Gulf will maintain enough instability for typical daytime heating/marine breeze afternoon showers and thunderstorms. Coverage will range from isolated to scattered each day. Beyond that, the local weather will be highly dependent on the eventual evolution of Cristobal. As of now, the expectation is for this system to meander near the southeastern Mexican coast through Thursday. The subsequent track ranges from northwest into southeast Texas to northeast and toward the Florida Panhandle. Obviously, that is a wide range of potential outcomes that will come into better focus once this system enters the Gulf of Mexico. Should the storm make landfall in Louisiana, substantial rainfall could become an issue. 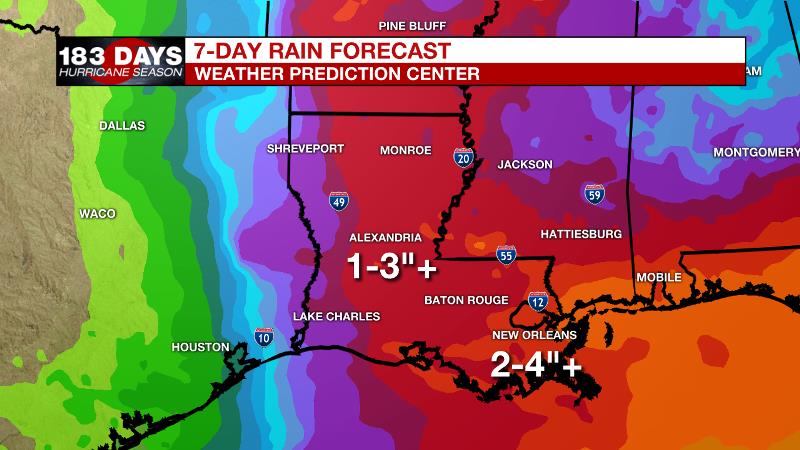 As of now, the Weather Prediction Center’s 7-Day rain forecast through Monday calls for 2-5” of rain across southeast Louisiana and southwest Mississippi. As we have learned though, isolated pockets with much higher amounts can occur from tropical downpours. Please continue to check in for updates.
--Josh