Below average temps through Friday morning

With a cold front moving through the area, expect cooler temperatures for the remainder of the week. Some upper 30s and patchy frost are not out of the question.

Today and Tonight: Tuesday will bring clearing skies as showers end during the morning hours. Into the afternoon, some returning sunshine will allow highs to reach the mid 60s. Northwesterly winds of 5-10mph will continue to push cooler and drier air into the area and as clouds exit completely, overnight lows will bottom out in the low 40s and possibly upper 30s north of Baton Rouge.

Up Next: Mainly clear skies and cooler than average temperatures will be the two weather headlines for the remainder of the week. Wednesday and Thursday will be the coolest two afternoons with high temperatures in the low 60s. While low 40s are expected for low temperatures, Thursday morning could bottom out in the upper 30s with some light frost. This will be most likely in outlying areas that tend to get a little cooler north of I-12. Freezing temperatures are not expected though, so sensitive plants should be ok. We will need to keep an eye on the next storm system pegged for Saturday as some stronger storms look possible. 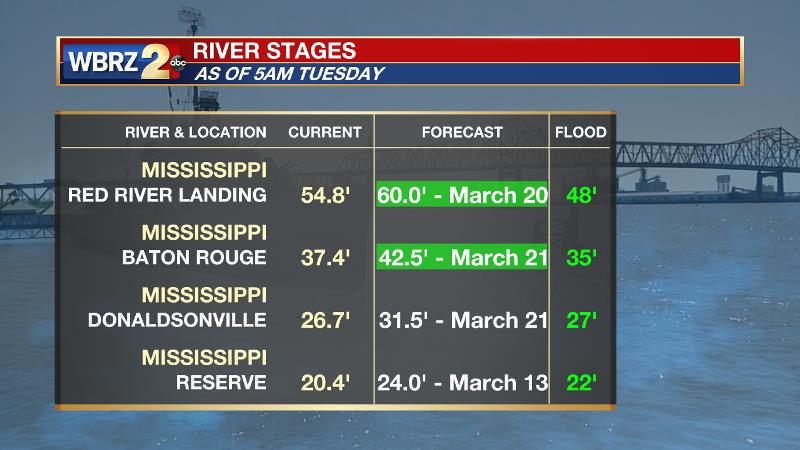 Runoff from early rain is not expected to be an issue for local rivers. The cold front will clear out by Tuesday afternoon and so should skies accordingly. Northwesterly winds will continue cold air advection over the next 36 to 48 hours. Thanks to an anomalous, deep mid-level trough for early March, below average temperatures are expected for the rest of the week. After a daytime high in the low 60s and good radiational cooling conditions Wednesday night, low temperatures could dip into the upper 30s into Thursday—especially north of I-12. The trough will exit the Eastern U.S. Friday but the next will quickly dig into the nation’s heartland. A storm system will develop across the Lower Midwest on Friday and will be worth watching as it crosses the local region early next weekend. Forecast models have been persistent in suggesting ample instability profiles and therefore much stronger and more widespread storms look possible at this point. This is still farther out in the forecast, so stay in touch for updates and more details.