As quickly as they arrived, rain chances are just as likely to leave us over the weekend. Hot, mainly dry weather will return.

Today and Tonight: A weakening cold front will crawl across the area on Friday, but provide enough of a trigger to create scattered showers and thunderstorms. This time, the southern half of the forecast area will stand the best chance. About 20-30 percent of the area will receive rain. As you know, warm season storms can bring downpours and frequent lightning with the occasional wind gust. Some sun will push highs into the low 90s. Overnight will be partly cloudy with lows in the low 70s.

Up Next: Rain coverage will again diminish over the weekend with highs reaching the low to mid 90s and lows stopping in the low 70s. Mainly clear skies and above average temperatures are likely through the first half of next week.

Baseball Regionals: LSU may have to dodge lingering showers on Friday evening during their matchup with Stony Brook. This chance is low and there is no real threat for a washout. Regardless, it will be muggy with temperatures in the mid to upper 80s. Southern will face a lower chance of rain in Starkville with thermometers in the mid 80s for their noon start against Mississippi State. 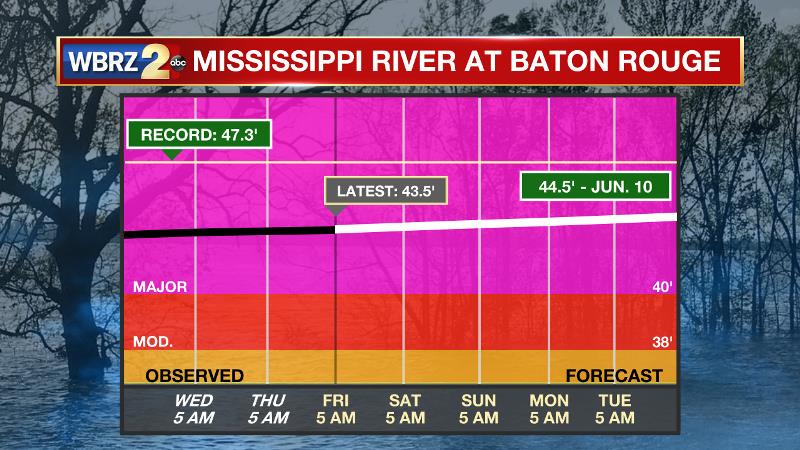 The Mississippi River: At Baton Rouge, major flood stage continues with a level of 43.5’ as of Friday morning. Peaking at 44.1’ on March 19, the river set its 7th highest recorded crest at Baton Rouge. At 146 days, this year marks the longest period above flood stage at Baton Rouge. With continued heavy rain events in the Midwest, runoff will result in a second, higher crest in early June. The current forecast is for the level to reach 44.5’, which would be one of the top five highest crests on record. Though delayed, the Morganza Spillway will be opened to mitigate flood risk downstream into the Baton Rouge area. This will increase water levels over unprotected areas over the Atchafalaya Basin. If you have property or interests in the floodway, for specific inundation levels, you are encouraged to visit this link. On the Mississippi River, the high water will remain an issue for river traffic and river islands, although some inundation will continue for unprotected low-lying areas. The city of Baton Rouge and the main LSU campus are protected by levees up to 47 feet. Some soggy areas and seepage may be noted due to the long duration of high water placing pressure on the levees. As some of the Mississippi River diverts into the Atchafalaya River, gauges at Krotz Springs and Morgan City will stay high as well. This creates backwater flooding in parts of Assumption Parish in areas such as Bayou Chene, Stephensville and around Lake Palourde.

A weakening cold front draped from west to east through the center of the forecast area will once again activate scattered showers and thunderstorms on Friday. The better coverage is likely to focus near the boundary along and south of I-12. 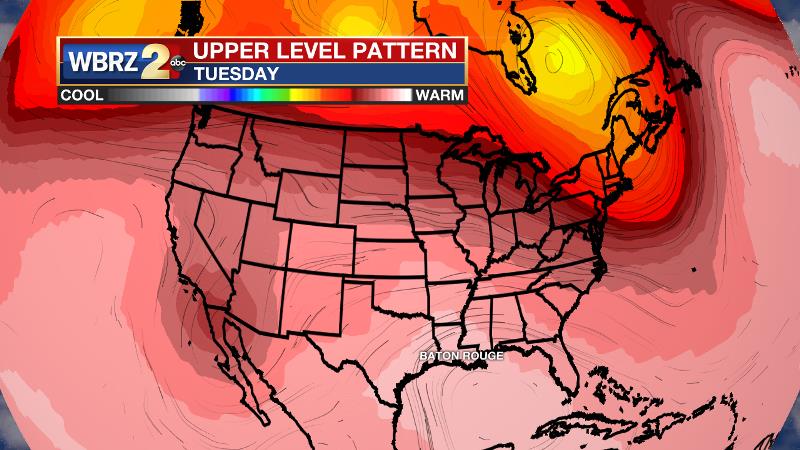 An upper level ridge will build over Texas and stretch eastward over the central Gulf Coast Sunday through the middle of next week. This will result in warm, sinking air in the upper levels translating to mainly clear, hot conditions at the surface. Above average temperatures will mean highs in the mid 90s and lows in the low 70s. The only caveat to the forecast will be how quickly the ridge centers over the local area. If it is shunted farther south and west, cooler air aloft in a northwest wind flow could result in enough instability for some showers and thunderstorms. At this time, we’re favoring the drier forecast.