After a quiet New Year's celebration, eyes on the next storm

With a strong high pressure system in the region, mostly clear skies and seasonable temperatures are expected through Wednesday morning. There have been some significant changes to the forecast model guidance with regard to heavy rain potential on Thursday.

Today and Tonight: Despite ample sunshine, high temperatures will struggle to reach 60 degrees on Tuesday as light, north winds continue. New Year’s Eve festivities in the Red Stick will feature tranquil weather and cool temperatures. Expect thermometers to fall through the 50s and into the low 40s overnight. 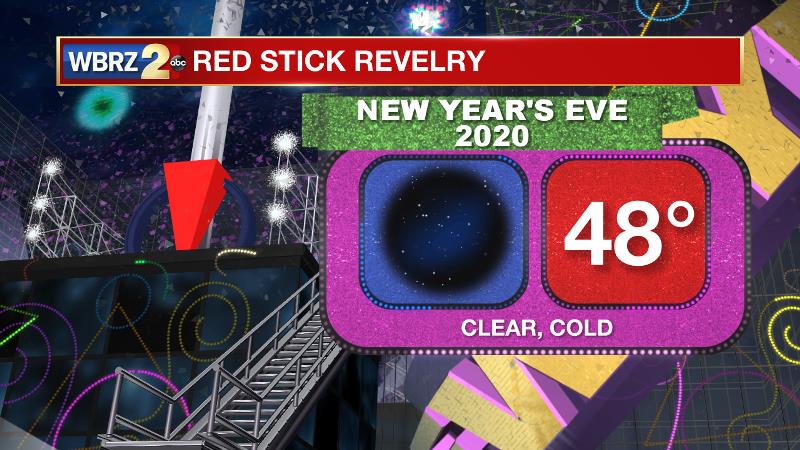 Up Next: On the first day of 2020, clouds will build over the region stopping high temperatures in the upper 50s and low 60s. An isolated shower is possible after sunset. These will be associated with a low pressure system that is set to develop in the northern Gulf and push onshore over the central Gulf Coast Thursday into Friday. The exact track of the surface low will be crucial to the sensible weather in southeast Louisiana and southwest Mississippi. Both the American and European global forecast models continue to show an axis of 2-4 inches of rain setting up from the Atchafalaya Basin into southwest Mississippi. However, more high-resolution, short-term computer models move the surface low farther west, therefore keeping substantial rain west of the WBRZ Weather forecast area. The caveat with this possible outcome is that it places the Baton Rouge area in a more favorable environment for severe weather. In the government forecast, the National Weather Service has placed the local area in a one out of four marginal risk for excessive rain, and still forecasts a corridor of 2-4 inches of rain from the Atchafalaya Basin to southwest Mississippi. This falls in line with the global forecast models and seems prudent since the short-term forecast models are less reliable outside of 36 to 48 hours. However, if they are on to something early, there could be a significant change to the local forecast. Rain could stick around into the early morning hours on Friday, before cool and quiet weather returns for the first weekend of 2020. 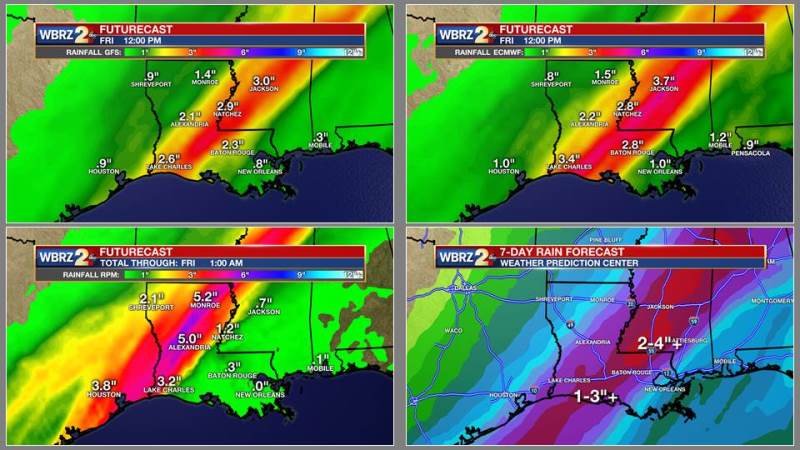 A strong upper level trough will move across the middle of the country on Wednesday, allowing strong and deep southwest winds to set up across the central Gulf Coast. This flow will transport ample moisture into the region, priming the atmosphere for precipitation. However, what seemed to be a straight-forward forecast 24 hours ago has become a little less clear. Beginning on Thursday morning, the long-term and short-term forecast models differ on the outcome. The long-term models continue the show an area of heavy rain set up farther east, which includes the areas north and west of Baton Rouge. In this scenario, flooding would be a potential and the Weather Prediction Center has placed a marginal to slight risk of excessive rain over those locations. 2-4 inches of rain would be likely with isolated higher amounts possible. The long-term models are also still rather progressive with precipitation occurring from Thursday morning to Friday morning. The short-term models that simulate radar keeps the heaviest rain across central and western Louisiana. This would result in a warm frontal passage over the local area and a surge of warm, moist and unstable air on Thursday. In addition to this added instability, the aforementioned strong southwest winds aloft would be very supportive of thunderstorm maintenance and there would be strong low-level wind shear to support severe thunderstorms. Only, thick clouds could prohibit severe weather. This scenario would come together more slowly with precipitation from Thursday afternoon to Friday afternoon. Since the short-term models are in their initial run, and therefore less reliable, this remains the less likely scenario but still a possibility to watch.  Following this system for the first weekend of the New Year, expect temperatures to be on the chilly side, as a deep trough becomes entrenched in the Eastern U.S.