A taste of fall arrives

A cold front will move southeastward into the Gulf of Mexico today, allowing the first true taste of fall this season. Cooler and drier air will be in place through the middle of the week.

Today and Tonight: Some early clouds and showers will quickly clear out of the area with sunshine breaking out by late morning. Thanks to a north breeze of 10-15mph, cooler and drier air will spill into the region and with no humidity, high temperatures will only make it into the middle 70s. Almost chilly temperatures are possible tonight. With continued north breezes, low temperatures could squeak into the upper 40s beneath clear skies.

Up Next: Thermometers will likely stay out of the 80s until Wednesday and clear skies will continue. Humidity should not return until at least Friday and even by then, it will not be nearly as sticky as last weekend. The weekend forecast is uncertain at this point. While Saturday looks straightforward with partly sunny skies and a spotty shower, Sunday could go either way based on the track of the next system—cool and wet or seasonable. These details will become clear over the next few days. 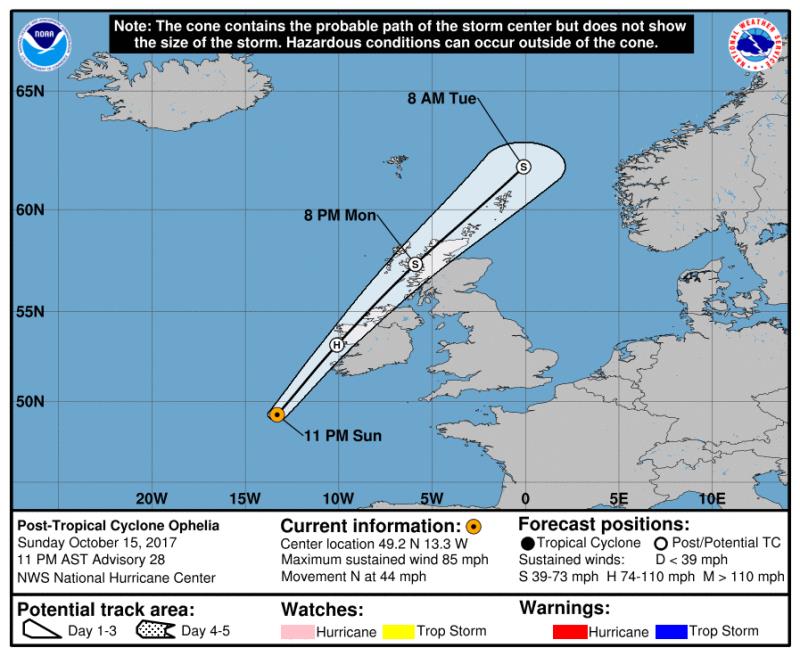 The Tropics: Ophelia is expected to bring strong winds and rain to Ireland and Great Britain today. Now post-tropical, the storm still packs hurricane force winds and is racing to the north at 40mph. Elsewhere, a tropical wave in the western Atlantic Ocean has a medium chance of organizing over the next two days as it drifts northward. However, a cold front will snare the system by the middle of the week, decreasing development chances. Therefore, at this time, there is no tropical threat to the United States.

A cold front will drift southeastward through the region on Monday, reaching the Gulf of Mexico by nightfall. Isolated showers along the boundary will end through the first few hours of daylight and clouds will break soon after. Temperatures and dew points will also fall behind the front through dawn, with humidity swiped away. Winds behind the front will be out of the north at 10-15mph with isolated higher gusts. With the strongest cold air advection of the fall season underway, Monday night lows could dip into the upper 40s, especially north of I-12. Lows will be slightly higher on Tuesday night. Highs will not return to the 8-0s until Wednesday, which is near average for the time of the year. A surface high pressure system will settle in the Eastern U.S. by the end of the week allowing southeast winds to return. Onshore flow will mean some moisture and humidity can return to the region and as a result, isolated showers will be possible eon Saturday. Confidence is low as to what happens Sunday and beyond. Right now, models are split as to whether an upper low tracks over the area, which would result in cool, rainy weather, or the low tracks north resulting in mild temperatures and just a few showers.