The air quality alert is expected to expire Wednesday night. Thursday, scattered rain showers and thunderstorms will increase mixing. However, generally light winds will limit dispersion, and Saharan dust will continue to linger over the region, leading to high-Moderate AQI levels for particles. Friday, easterly to east-northeasterly winds will develop, which will aid dispersion. However, carryover of Saharan dust will remain over the state, and partly sunny skies and warm temperatures will support ozone formation. Therefore, AQI levels will be Moderate.

Next 24 Hours: Any rogue showers that formed during the late afternoon hours will quickly subside into the evening hours. Look for another muggy night as low temperatures struggle to reach the mid 70s. Mostly sunny skies will guide high temperatures right back into the mid 90s by early Thursday afternoon. A weak, upper level disturbance may help to produce isolated, afternoon showers and thunderstorms to the tune of about 30 percent coverage in measurable rain.  The brief downpour for some may be welcome relief from the heat and a good douse for lawns and gardens.

Up Next: Friday and Saturday, there may be an opening for stray afternoon showers and thunderstorms to form, but we are not currently expecting anything organized like at the end of last week. Heat will be the big story right on through next week. Unfortunately, there are some early signs of even hotter temperatures—upper 90s—Sunday through at least Wednesday. In fact, it is not out of the question that one or two reporting stations can find an air temperature of 100 degrees, a mark not met in the Capital City since August 2015. On the other hand, feels-like temperatures, or heat indices, will have no problem reaching well into the 100s and any day with enough humidity to allow those readings to eclipse 108 degrees could warrant a heat advisory. CLICK HERE for your detailed 7-Day Forecast. 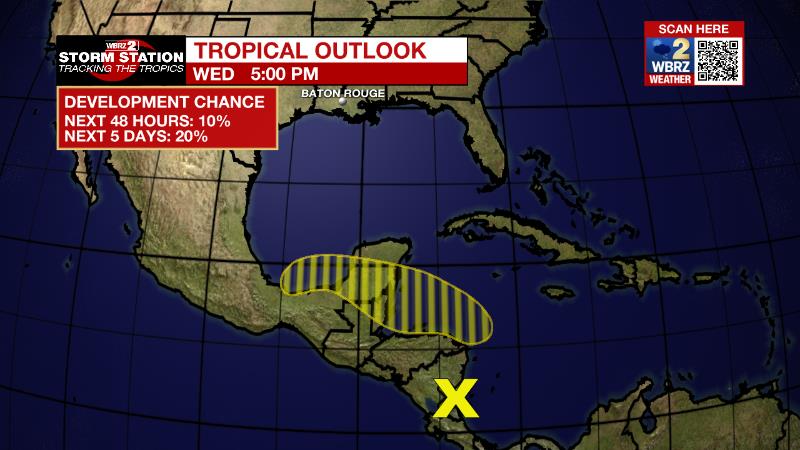 The Explanation: A dominant upper level ridge of high pressure will shift westward into the end of the week as a trough digs into the Northeast U.S. A weak disturbance wheeling around the rim of the ridge from east to west will help to kick out isolated showers and thunderstorms on Thursday afternoon as atmospheric moisture reaches its highest for the week. Triggers for convection will be much more limited on Friday and Saturday resulting in areal coverage of around 20 percent each afternoon. Through the weekend, and especially into next week, the ridge will broaden and center over the Gulf Coast. With this, high temperatures will easily reach the mid 90s and the upper 90s look well within reach. In fact, one or two spots could even sneak up to 100 degrees. With dew point temperatures in the mid 70s, feels like temperatures could eclipse 108 agrees prompting the need for heat advisories. When the heat index is expected to move over 113 degrees, heat warnings are issued. With the ridge causing warming, sinking air, it will also be very difficult for showers and thunderstorms to develop with daily coverage at 10 to 20 percent, at most.