There are no major changes to the working forecast. The tropics remain busy but non-threatening.

The Next 24 Hours: The quiet nights will continue with mostly clear skies and lows near 73 degrees into Thursday. Despite some spotty shower action the last few afternoons, Thursday should work out mainly dry, mainly sunny and hot with a high near 94 degrees.

After That: The week will end much as it began, mimicking our weather from the previous days. A weakening front will approach the region this weekend and allow moisture to pool over the Gulf States With highs in the low 90s, lows in the mid 70s and plenty of late summer humidity, the lake and sea breeze will activate afternoon showers and thunderstorms right into the middle of next week. A push of moisture from the Gulf may enhance activity and even cause some to occur away from peak heating hours on Monday and Tuesday. 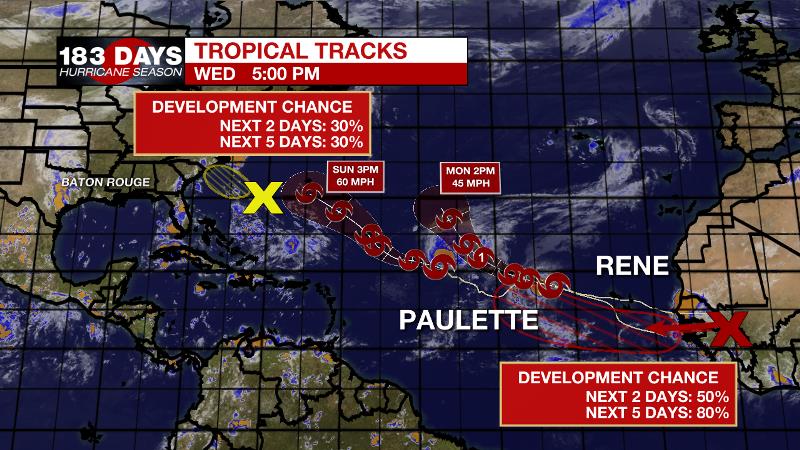 The Tropics: As of 4pm Wednesday, Tropical Storm Paulette was drifting west-northwest in the central Atlantic with 60mph winds. The storm may go up and down in intensity a bit over the next few days. Tropical Storm Rene remains over the far eastern Atlantic with winds still at 40mph. Rene will likely become a hurricane over the next few days will moving to the northwest and then northeast over the east Atlantic. Neither of these systems poses a threat to the Gulf Coast.

The Explanation: As winds turn southeasterly, humidity (higher dew points) will be reinstated across the forecast area over the next several days. A slower than expected saturating of the atmosphere may mean scarce coverage in rainfall over the next few days—mainly limited to areas south of I-10. Additionally, sinking air on the southern edge of an upper level ridge will make also convection difficult and allow for hot afternoon temperatures in the mid 90s. By Saturday, deeper moisture will aide an increase of showers and thunderstorms. Meanwhile, a deep area of upper level low pressure will slowly advance northeast through the end of the week. This low will help to amplify an upper level ridge across the eastern U.S. The ridge will cause that upper low to ride much farther north, into the Great Lakes region. As a result, the associated cold front will buckle on approach to the Southeast. However, the vigorous trough will cut into the deep ridge and decrease any subsidence in the atmosphere. That, along with a stalling and decaying front coming into the area will cause scattered showers and thunderstorms through at least Tuesday. Additionally, some westbound waves crossing the northern Gulf may enhance rainfall at times and possible cause activity outside of the normal diurnal schedule.