A typical summer day for your Tuesday.

Today and Tonight: Tuesday will be a regular summer day. Temperatures will be near 92 degrees with some humidity. A few isolated showers are possible in the afternoon. Areas east and south of Baton Rouge have the best shot to see some rain today. Even if you do have rain over you, there will still be a lot of dry time. Showers will clear out overnight with lows near 74 degrees.

Up Next: Rain coverage will continue to go up all week as moisture from the Gulf of Mexico starts to dominate the area. Temperatures will still be in the low 90s in sunny spots and a little cooler for those areas that see some rain. Overnight lows will be in the mid-70s. Rain coverage is expected to bump up from 20% today to near 50% by Friday. Scattered showers are expected to continue through Monday. The current developments in the tropics are not expected to impact the local forecast.

Two new storms were named on Monday. Tropical Storms Paulette and Rene are out in the open Atlantic and are not expected to impact the local forecast. There are also two other areas to watch, one could impact the east coast of the United States. 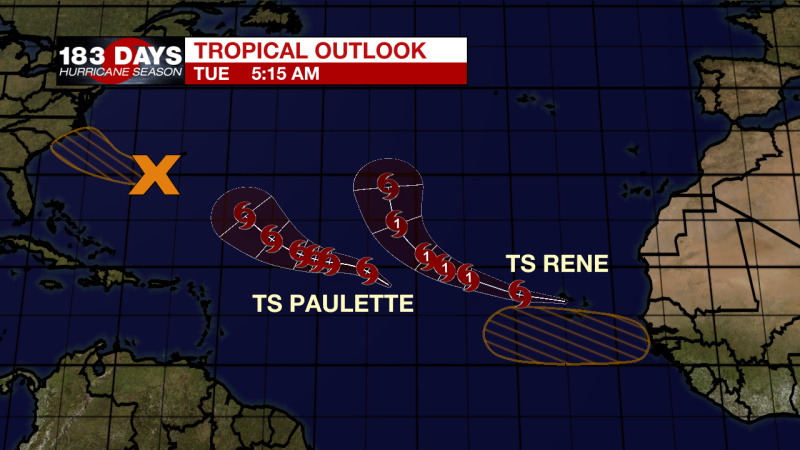 At 800 AM CVT (0900 UTC), the center of Tropical Storm Rene was located near latitude 16.4 North, longitude 24.9 West. Rene is moving toward the west near 15 mph (24 km/h), and a motion toward the west to the west-northwest is expected over the next few days. On the forecast track, the center of Rene will pass over the central and western Cabo Verde Islands today, and then move away from the islands tonight. Maximum sustained winds are near 40 mph (65 km/h) with higher gusts. Little change in strength is expected today, followed by gradual strengthening tonight into Thursday, with Rene forecast to become a hurricane in a couple of days. Tropical-storm-force winds extend outward up to 45 miles (75 km) from the center. The estimated minimum central pressure is 1001 mb (29.56 inches).

At 500 AM AST (0900 UTC), the center of Tropical Storm Paulette was located near latitude 18.1 North, longitude 42.8 West. Paulette is moving toward the northwest near 6 mph (9 km/h) and should continue in this general motion with a faster forward speed later today, then move west-northwestward Wednesday through Friday. Maximum sustained winds have increased to near 50 mph (85 km/h) with higher gusts. Further strengthening is forecast during the next day or so, with little change in strength expected afterward through Thursday. Some weakening is expected Thursday evening and Friday. Tropical-storm-force winds extend outward up to 105 miles (165 km) from the center. The estimated minimum central pressure is 1000 mb (29.53 inches).

An area of low pressure located about 250 miles west-southwest of Bermuda is producing disorganized showers and thunderstorms. Some gradual development of this system is possible during the next few days while the low moves slowly westward to west-northwestward.

A tropical wave is forecast to emerge off the west coast of Africa late Wednesday or Thursday. Gradual development is anticipated once the system moves over water, and a tropical depression could form late this week or over the weekend while the system moves generally westward across the eastern tropical Atlantic.