Warmth will continue through Thursday. However, the next frontal system will then deliver a pop of showers and thunderstorms and cooler temperatures.

Today and Tonight: Continued onshore flow will aid the development of spotty showers on Tuesday as well, especially north of I-10 during the midday hours. Beneath mostly cloudy skies, high temperatures will climb into the mid 80s. Showers will lessen in number overnight with low temperatures in the low 70s.

Up Next: High temperatures will continue to increase through the 80s and approach the 90s on Wednesday. A frontal system will then move into the region on Thursday. This will bring the potential for showers and thunderstorms, and a few could bring gusty wind and heavy rain late. Clouds and showers may linger Friday morning until a relative lull through Saturday afternoon. Thermometers will take a turn for the cooler behind that system, and unlike the past couple of frontal passages, this cool air mass will have some staying power. A reinforcing front may bring another round of showers and thunderstorms Saturday night through Sunday.

The Mississippi River: At Baton Rouge, major flood stage continues with a level of 42’ as of Tuesday morning. Around April 11, the river is projected to crest near 43’. The high water is primarily an issue for river traffic and river islands, although some inundation will continue for a few spots north and south of Baton Rouge that are not protected by levees. Unprotected low-lying areas will be flooded and agricultural operations will be impacted on the west side of the river. The grounds of the older part of Louisiana State University's campus become soggy. This includes the area around the Veterinary Medicine building, the Veterinary Medicine Annex, the stadium and ball fields. The city of Baton Rouge and the main LSU campus are protected by levees at this level. This comes after a year where the gauge at Baton Rouge spent a record smashing run of 212 consecutive days above flood stage between January and August. Peaking at 44.1’ on March 19, 2019 the river set its 7th highest recorded crest at Baton Rouge. The level is also high in New Orleans and the U.S. Army Corps of Engineers has opened the Bonnet Carre Spillway. From May to July 2019, the Spillway was open for a record 79 consecutive days during its second opening of the year. If the Spillway is opened in 2020, it will mark the fourth time in five years and the 15th time since being built in 1931.

A ridge of high pressure over the Gulf of Mexico will maintain above average temperatures through the middle of the week. While, mainly dry conditions are anticipated, advancing Gulf moisture amidst onshore winds will allow isolated showers to develop. The chances may be enhanced somewhat by some weak upper level impulses riding over the ridge with the best, albeit low, chance for isolated showers through Tuesday. High resolution forecast models place the best chances for isolated convection over locations north of I-10 and east of I-55 between 11am – 2pm. Wednesday will be the warmest day of the week with high temperatures approaching 90 degrees. Then, a frontal system will move into the region late Thursday. With several days of warmth and moisture priming the atmosphere, showers and thunderstorms should develop ahead of the front. Interestingly, the better chance for rain may come after the front passes on Thursday night as a more potent upper level wave of energy rides over the cold front. This period will need to be monitored for some heavier activity. 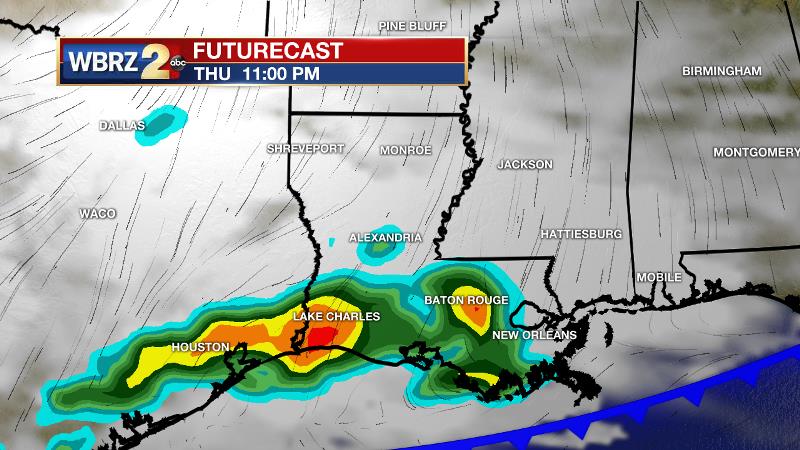 The first front will knock temperatures down a bit, as it crawls into the Gulf of Mexico. It is expected to stall close enough to the region that clouds and isolated showers will stick around early Friday. A second front will then move in during the middle of the weekend. While confidence is low at this time, the current forecast is for this front to flush out the lingering clouds and showers and provide a prolonged period of cooler and drier than average conditions into early next week.