Today and Tonight: The chance for showers and thunderstorms will diminish for eastern locations on Tuesday. Some activity will develop south and west of Baton Rouge and thanks to the tropical nature of the showers, brief downpours could lead to some nuisance street and poor drainage flooding. Some sun and warm temperatures are also expected. Highs will be near 93 with lows near 75.

Up Next: Rain chances will be limited for the remainder of the week. Hot and dry will be the trend for this forecast period with Wednesday and Thursday maxing out in the mid 90s. A weak front may try to sneak in on Friday but this system will bring little more than an isolated shower. Thermometers could nudge back but will stay above average into early next week. The long-term outlook from the Climate Prediction Center hold above average temperatures through the end of the month. In fact, the Baton Rouge area is on pace for its hottest September on record. 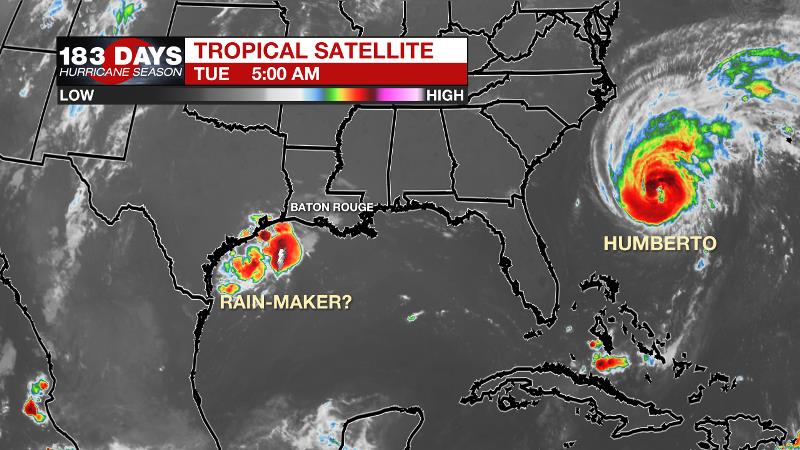 The Tropics: Hurricane Humberto continues to strengthen with large swells affecting much of the southeastern United States coastline. As of 7am Tuesday, maximum sustained winds were 90mph with a minimum central pressure of 966mb. Humberto was moving east, northeast at 8mph and is expected to accelerate northeastward through the end of the week. Tropical Storm watches have been issued for Bermuda where rain, wind and surge are possible. A disturbance in the northwestern Gulf will drift toward the coast of Texas and has a minimal, 30 percent chance of development before coming ashore late Tuesday. Regardless of development, more than 10 inches of rain is expected over southwest Louisiana and southeast Texas through the end of the week. Another wave located between the Cabo Verde Islands and Lesser Antilles is likely to become a tropical depression over the next two days as it moves to the west, northwest.

As a weak tropical disturbance will moves across Texas on Tuesday and Wednesday, drier air will remain steadfast across the Mid-South. A battleground between these two air masses is set across the local area making for a tricky rain coverage forecast. The best bet for rain on Tuesday will be closer to that deeper tropical moisture, in parishes west of the Amite River and closer to the coast. Much heavier action is anticipated from the Atchafalaya Basin and especially into southeast Texas where there is a “moderate risk” for excessive rainfall today through Thursday. As the disturbance slides farther west into Texas, the drier air will win out and a, upper level ridge over the Mid-South will keep thermometers well above average through Thursday. A weak front may move into the area by Friday but it is not expected to modify temperatures or dew points much. It may be able to stir up a shower or two but even that is not a good bet.

Time for a thread to answer some questions I've been getting!

1. Just how hot was this summer?
2. September felt even hotter, is this unusual?
3. Where is that first fall cold front?#BatonRouge #LaWX #MsWX (1/8)https://t.co/nf6LnllHhB

While the end of September is a time we start to see some fronts making it into the region, there is no immediate sign of a passage and the Climate Prediction Center is calling for above average temperatures and drier conditions to end the month.