Slightly drier air in the atmosphere will cut down on showers and thunderstorms through Thursday. Unfortunately, no major changes will be felt at the surface.

Next 24 Hours: Gradual clearing is expected overnight. With dew point temperatures remaining in the mid 70s, low temperatures will not drop much more than that. Some early sun will send high temperatures into the low 90s on Wednesday. A cold front will then drop into the area from the north. This feature will be counterintuitive in that a front moving into our humid air mass would normally cause showers and thunderstorms. However, drier air coming into the atmosphere behind this front may actually limit widespread activity. At the same time, drier air helps thunderstorms produce strong wind. So, in the end, expect isolated showers and thunderstorms to develop on Wednesday afternoon, one or two of which could cause gusty wind.

Up Next: On the other side of the front, the atmosphere will dry a bit on Thursday providing a very brief period of highly isolated showers and thunderstorms. Tropical moisture will surge right back into the area on Friday and scattered to widespread showers and thunderstorms are anticipated both weekend days. The return of more rain and more clouds will limit high temperatures to the upper 80s, which is only three, or four degrees below average for early September. CLICK HERE for your detailed 7-Day Forecast. 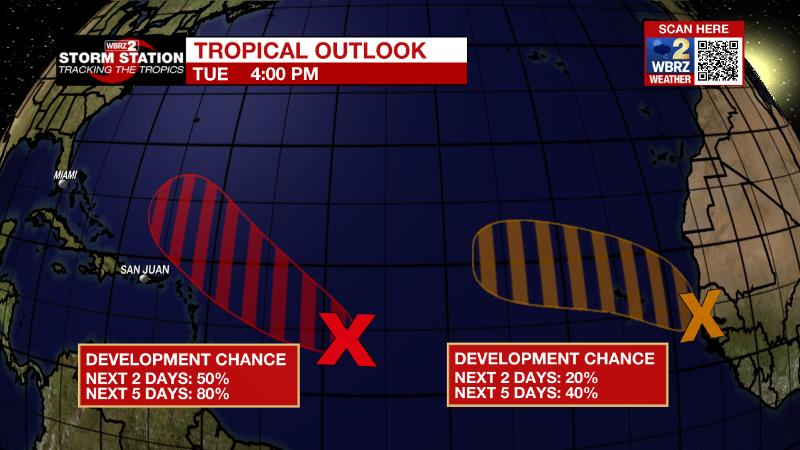 The Tropics: A broad area of low pressure over the central tropical Atlantic is producing a large area of disorganized cloudiness and showers. Although environmental conditions are only marginally conducive, there is an eighty percent chance of some gradual development of this system. A tropical depression is likely to form later this week as it moves slowly west-northwest at 5 to 10 mph toward the Lesser Antilles.

A tropical wave is located off the west coast of Africa. There is a thirty percent chance of some gradual development of this system is possible after that time while it moves generally westward to west-northwestward across the far eastern tropical Atlantic.

The Explanation: By Wednesday, an upper level trough will send a surface front into the region. This feature will be accompanied by drier air in the upper levels producing a twofold effect on our sensible weather. First, the number of showers and thunderstorms will be reduced into the isolated category. Second, any thunderstorms that do form along the front, could easily produce strong wind gusts as the dry air will create downbursts. That drier air will reach as far south as I-10 Wednesday night into Thursday helping to keep lower end rain coverage for those areas north of the interstates. However, moisture will surge back into the area by Friday as a weak trough of low pressure moves from southeast to northwest across the Gulf of Mexico. These features will promote greater rain coverage once again for the weekend. By then, increased activity will likely keep high temperatures a few degrees below average, in the mid to upper 80s.