Due to Hurricane Dorian east and a tropical depression southwest, air is pushing away from the local area toward those of low pressure systems. This causes air from above to sink to the surface to fill a void. Sinking air warms and dries.

Today and Tonight: Hot temperatures will continue this afternoon with readings reaching the low 90s by lunchtime and about 97 degrees by 3pm. A *HEAT ADVISORY* has been issued for much of the area as afternoon feels-like temperatures will peak around 108 degrees. Unless you must, avoid strenuous activity during those times. Either way, stay hydrated. Mostly sunny skies are expected. Winds will be light out of the east, northeast. Overnight, skies will stay clear with lows in the mid 70s.

Up Next: Hot and dry conditions are expected through the weekend. A large upper level ridge of high pressure will build across the Lower Midwest and drift toward the eastern Gulf by Monday. Light, northeasterly winds will keep slightly drier air in place. Drier air warms more efficiently than humid air, hence the well above average temperatures that are expected. One or two stations could tempt 100 degrees through Sunday. Rain coverage will be very low, with only a stray, daytime heating forced shower possible Friday, Saturday or Sunday.

Research has shown that artificial fields similar to that in Texas Memorial Stadium end up 35 – 55° hotter than natural grass in ideal heating conditions. #LSUvsTEX https://t.co/e38pLZy5fH

Both LSU and Southern football can expect very hot temperatures and dry conditions for their respective games. Despite an evening kickoff, LSU will likely kickoff with thermometers above 100 degrees in Austin. Southern will start with temperatures around 90 degrees in Memphis but they will climb into the mid 90s by the end of the game. 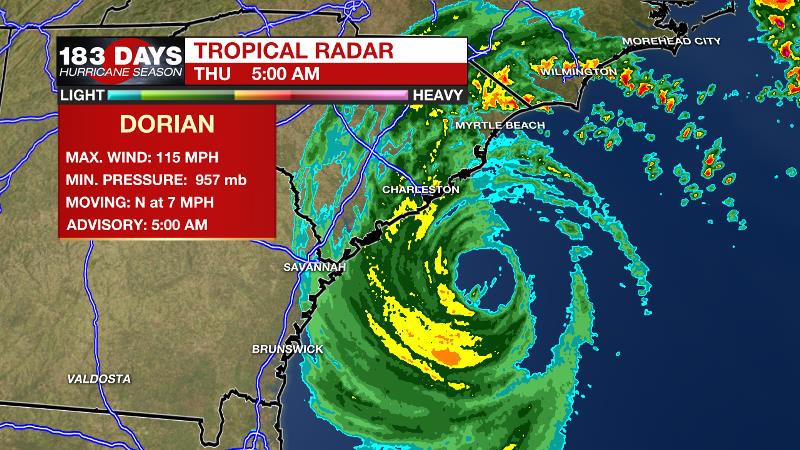 The Tropics: As of 5am Thursday, Hurricane Dorian was positioned just east of Charleston, SC. and south of Wilmington, NC. Maximum sustained winds were at 115 with a minimum central pressure of 957mb. A turn to the northeast is expected to occur later Thursday. On the current forecast track, hurricane conditions will be very close to the coasts of South Carolina and North Carolina with a U.S. landfall possible. For coastal areas from South to North Carolina, storm surge of 4-7 feet is possible with rain amounts of 7-10 inches. Tropical Storm winds are possible there as well and a slight jog to the west by Dorian could result in much higher winds. Tropical Storm Fernand has dissipated over northeast Mexico but is still creating areas of heavy rain. Tropical Storm Gabrielle is racing northwest across the eastern Atlantic. Some strengthening is possible but Gabrielle will only be a fish storm. 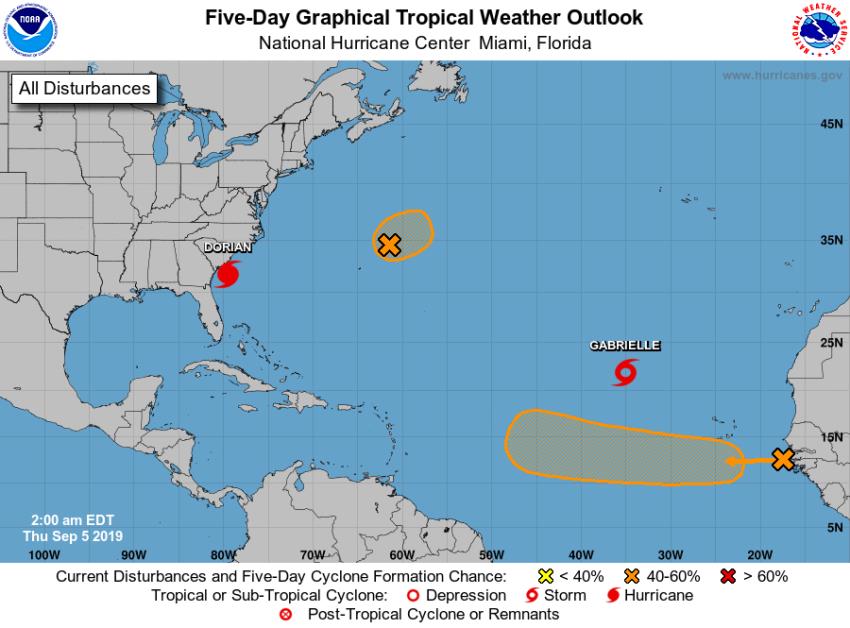 As we near the climatological peak of hurricane season, the Atlantic Basin is characteristically busy with several other areas being monitored for development. A wave in the central Atlantic, east of Bermuda has a medium chance of development as it drifts eastward. The next wave moving off the African Continent near the Cabo Verde Islands also has a medium chance of development. Projected to take a more southerly track across the Atlantic Ocean, this one will at least merit some attention from the U.S. For the latest on the tropics, check in with wbrz.com/weather, WBRZ Weather on Facebook and Twitter.

Winds over the local area are diverging, moving toward the lower pressure regions associated with Dorian and Fernand. Air sinks to fill the surface void, which creates a warming and drying effect. That is the basic explanation for why the weather pattern is mostly dry with well above average temperatures. Temperatures have a shot at 100 degrees several times through the weekend. While dew point temperatures will be in the low 70s, rather than upper 70s normally felt in July and August, Heat Advisory feels-like temperatures could still be met some days due to the much higher air temperature. Dorian’s northeastward advance may push a weak cold front into the region Friday but with a very dry environment will barely allow a shower. Through Tuesday, little more than a rogue air mass shower or thunderstorm is possible, but rain coverage will stay very low.