Today and Tonight: A warm morning will turn into a steamy afternoon. High temperatures will top out around 94 degrees. Partly sunny skies will give way to isolated showers and thunderstorms between 1 – 8pm. Any storm will be capable of quick downpours, frequent lightning and possibly some gusty wind. Showers will die out during the evening followed by partly cloudy skies and low temperatures near 76 degrees.

Up Next: The upper level trough, responsible for more than a week of below average high temperatures and an active pattern of showers and thunderstorms, will start to move east. By Friday, an upper level ridge is expected to nudge eastward which will stabilize and dry out the atmosphere. The result will be not as many showers and slightly warmer high temperatures. Humidity will be seasonably high which will result in several hours each afternoon with feels-like temperatures in the low 100s. Nights will be particularly uncomfortable, as dew point temperatures in the upper 70s hold lows near 80 degrees. The National Weather Service has the area on standby for some heat advisories. 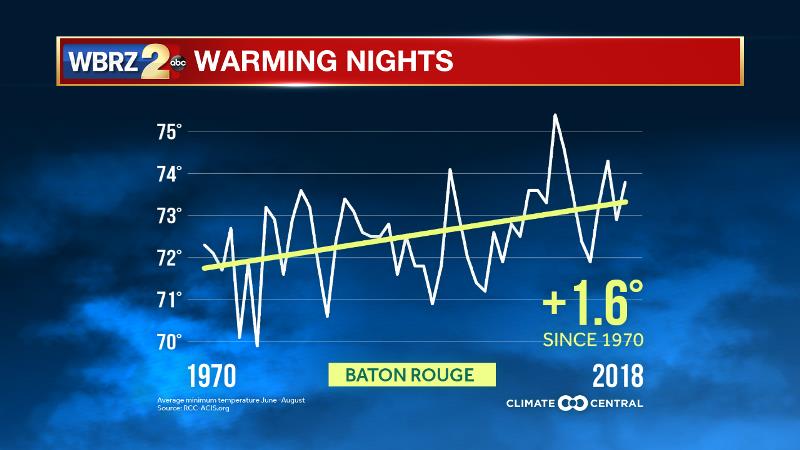 2019 has already set a number of high heat records. While record warmth is often related to hot afternoons, overnight low temperatures have been rising even faster than daytime highs. Since 2010, there have been 34% more record high minimums than record high maximums (according to NOAA data compiled by meteorologist Guy Walton). And of all the summers on record, 2018 had the warmest low temperature in the contiguous U.S.

This week, Climate Central examined changes in average summer low temperatures around the country. Nationally, the increase was 1.8°F since 1895, dating back to when records began. In Baton Rouge, average nighttime lows have warmed about 1.6 degrees since 1970. Warm nights carry major health risks. When the temperature doesn’t drop much overnight, it doesn’t give people a chance to recover from extreme daytime heat. Urban areas can retain even more heat through their dense network of concrete roads and buildings, making nighttime temperatures up to 22°F higher than in rural areas. Health risks are higher for vulnerable populations such as the sick, elderly, and lower-income communities who may not have air conditioning or struggle to access cooling centers.

Even for those who have AC, the cost is only increasing as the climate warms. A 2018 Climate Central report noted that 93% of the same cities analyzed have observed a rise in cooling degree days (which relates to how much we use our AC units). Cooling off by using fans with ice tanks—as well as trees and other green infrastructure—can help reduce these energy costs and health risks.

Climate Central's local analyses include 244 stations. However, for data summaries based on linear trends, only 242 stations are included due to large data gaps in St. Johnsbury, Vermont and Wheeling, West Virginia. 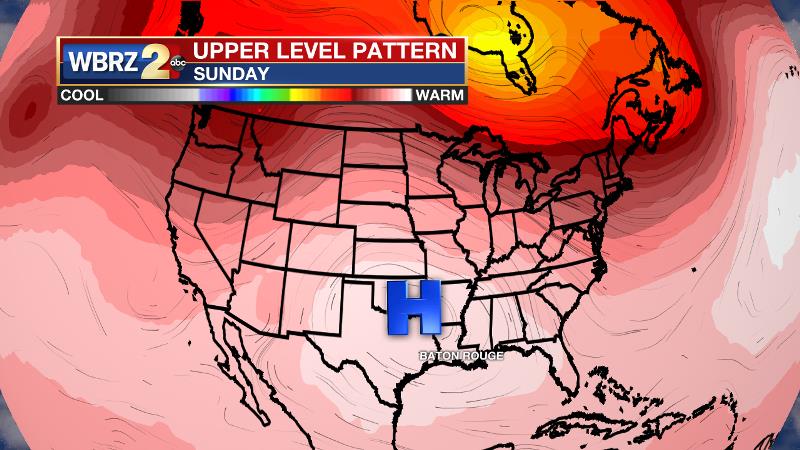 The stubborn upper level ridge of high pressure that has been parked over the Desert Southwest is beginning to dislodge. As this ridge moves eastward, the local area will undergo some noticeable changes. First, high temperatures will climb a few degrees. Several days in the mid 90s are anticipated late week through the weekend as the ridge centers over Texas and Louisiana. High dew points will result in heat indices exceeding 100 degrees for several hours each day and uncomfortable nights, barely exiting the 80s. Second, the subsiding air beneath the ridge will cut into the number of showers and thunderstorms that are able to develop. Consequently, the sinking air and pockets of drier air aloft mean that any storms that can develop will be capable of gusty wind. As a result, fewer but stronger storms will be in the forecast. A caveat to the rain coverage forecast is that a few disturbances riding around the ridge of high pressure could spin across the local area at times leading to a few rounds of showers and thunderstorms. These disturbances would be more likely to impact areas east of I-55. Of course, per the nature of warm season storms, downpours and frequent lightning remain possible.