Two more days of tropical showers can be expected before a nice, drying trend emerges. Many area rivers are cresting or have crested after Ida’s flooding rain. 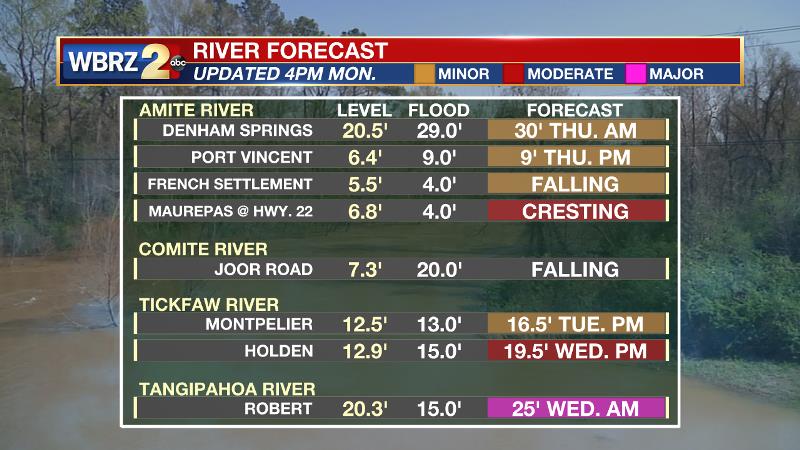 Next 24 Hours: Some tropical showers in the lingering feeder bands of Ida could stroll through the area tonight, but they are not expected to last very long. Skies will be partly cloudy otherwise and temperatures will be muggy in the low to mid 70s. Tuesday will see a mix of sun and clouds with scattered showers, still related to Ida. There will plenty of dry time and high temperatures are expected to run into the upper 80s. With ample humidity, feels-like temperatures will near 100 degrees. The National Weather Service has issued a HEAT ADVISORY with lower criteria than usual given the circumstances of no electricity, no air conditioning and the extra time being spent working outdoors.

*HEAT ADVISORY*
-Tuesday, 10a - 5p.@NWSNewOrleans has temporarily lowered the criteria from a max feels-like temp. of 108° to 100° to stress the importance of caution in outdoor restoration efforts due to the lack of access to air conditioning for most. #LaWX #Ida pic.twitter.com/MusMcCGC90

Up Next: Wednesday should feature scattered showers and thunderstorms as the last of tropical moisture associated with Ida is flushed from the area by a weak boundary approaching from the north. That boundary will allow drier, less humid air to push in for Friday and the weekend. Highs and lows could run a touch below average in the upper 80s and upper 60s respectively with mostly clear skies. lower humidity. CLICK HERE for your full 7-Day Forecast.

The Tropics: As of 4pm Monday, Ida was weakening and riding north across the I-20 corridor. Maximum sustained winds were dropping below tropical storm force and the system will quickly degenerate into a remnant low. Heavy rain and tornadoes will remain a threat through much of Mississippi, Alabama and states into the Mid-Atlantic. 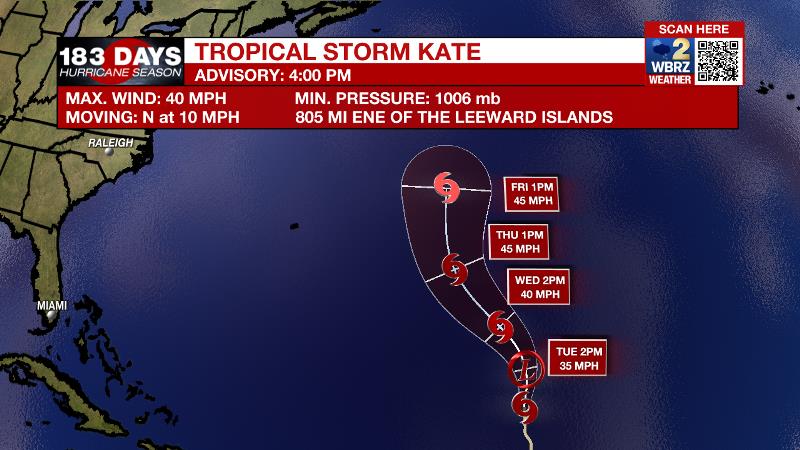 As of 4pm Monday, Tropical Storm Kate was drifting north across the east, central Atlantic with maximum sustained winds of 40mph. This system could slowly strengthen well east of Bermuda through the week as it remains out to sea and no threat to land.

Satellite-derived wind data and satellite imagery indicate that an area of low pressure has formed over the far eastern Tropical Atlantic in association with a tropical wave that recently moved off the west coast of Africa.  There is a 90 percent chance that a tropical depression forms within the next couple of days while the system moves west-northwestward at 10 to 15 mph.

A broad area of low pressure is expected to form in the southern Caribbean Sea by midweek. There is a 20 percent chance of some slow development by the end of the week, as long as the system remains over water.  This system is expected to move gradually west-northwestward or northwestward at 5 to 10 mph over the western Caribbean Sea near the east coast of Central America.