Sun and lower humidity are expected to start the week. The next storm system will move through the area Wednesday night. For the second straight weekend, a very strong tornado occurred just north and east of the local viewing area. An EF-4 tornado struck Walthall County last Sunday. Another powerful twister moved through Lamar County last night. We will await the damage survey from the National Weather Service for a rating. In the local area, there were some spotty hail and wind damage reports. 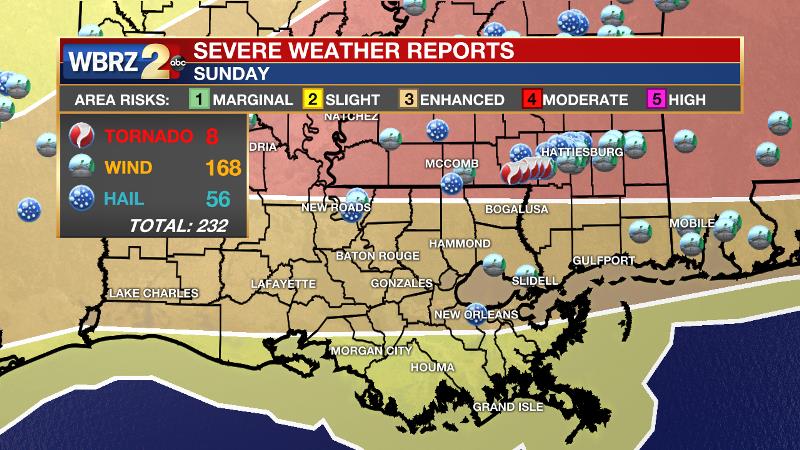 Today and Tonight: Clouds will at least be a part of skies through Monday morning. More sunshine will become available by afternoon. Temperatures will warm into the upper 70s with light, north winds. With an overnight reading in the low 60s, some passing clouds are expected. Models hint at a passing shower near dawn, but activity should be brief and isolated, if at all.

Up Next: An area of surface high pressure will bring lower dewpoints and pleasant conditions through Tuesday. Temperatures will stay above average through the week, and hover in the low-to-mid 80s with lows near 60. The next low pressure system is set to develop and pass to our north late Wednesday and Thursday, which will bring a return to showers and storms along the Gulf Coast. While considerably less robust than the last two storm systems, one or two storms could maintain some strength through the local area Wednesday night. The Storm Prediction Center has parts of Pointe Coupee Parish and southwest Mississippi in a 2/5 “slight” risk for severe weather. Another weak system is poised to move through on Saturday afternoon with just isolated activity.

The Mississippi River: At Baton Rouge, major flood stage continues with a level of 43.7’ as of Monday morning. The river is expected to fall very slowly through the next two weeks. The high water is primarily an issue for river traffic and river islands, although some inundation will continue for a few spots north and south of Baton Rouge that are not protected by levees. Unprotected low-lying areas will be flooded and agricultural operations will be impacted on the west side of the river. The grounds of the older part of Louisiana State University's campus become soggy. This includes the area around the Veterinary Medicine building, the Veterinary Medicine Annex, the stadium and ball fields. The city of Baton Rouge and the main LSU campus are protected by levees at this level. The level is also high in New Orleans and the U.S. Army Corps of Engineers has opened the Bonnet Carre Spillway.

Northwesterly winds in the upper levels of the atmosphere will maintain drier air and quieter weather over the next two days. A weak disturbance over northwestern Texas on Monday morning could potentially cause an isolated shower around daybreak Tuesday but this chance is fleeting. The next, more substantial storm system will zip across the southern tier on Wednesday. This upper level trough will pull moisture northward through the day. By evening, a surface low pressure reflection will move across Arkansas and north Mississippi with a trailing cold front. This system will take a slightly more northern track, meaning the wind fields will not be quite as favorable for severe weather as the last system. Also, the nighttime passage will leave a little less warmth and instability as well. Still, enough ingredients are showing up on forecast model guidance that one or two strong thunderstorms will be possible, especially north and west of Baton Rouge. Given the non-zero possibility of a strong storm, the Storm Prediction Center has placed areas from McComb to St. Francisville and points north in a “slight” risk for severe weather. This system will exit on Thursday morning with quiet weather to follow until another weak disturbance arrives on Saturday. At this time, that one looks low impact.