A cold front will move through the area on Monday bringing morning showers and thunderstorms then seasonable temperatures for the remainder of the week. The next rain is not on tap until next weekend.

Today and Tonight: Monday will be mostly cloudy with showers and thunderstorms in the morning. The bulk of the action will occur between dawn and noon. Rain could briefly fall heavily. Look for clearing skies by the afternoon with highs making it to near 70 despite the passage of a cold front. Given a milder starting point in the upper 50s, this really will not be that much of a feat. Continued clearing is expected overnight with lows near 40. 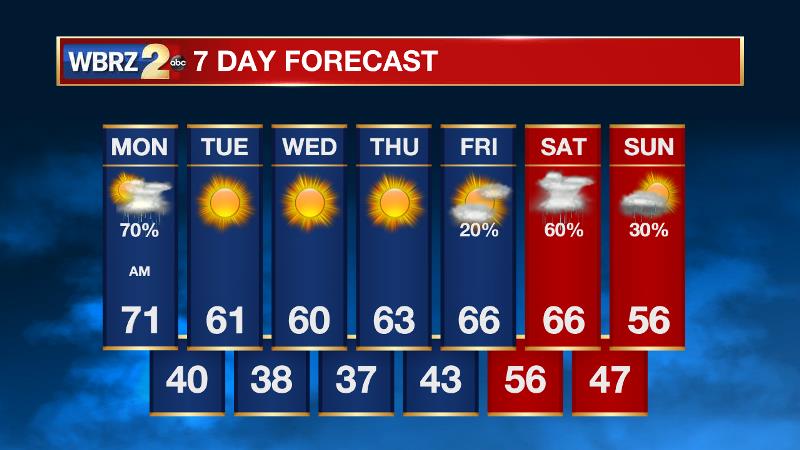 Up Next: Behind this Pacific, rather than Canadian, cold front, the temperature drop is not going to be as dramatic. We will still call temperatures chilly with Tuesday through Thursday morning as low as the upper 30s. Afternoon highs will reach the low 60s each day with plenty of sunshine. As we approach the weekend, an increase in clouds is expected with some eventual showers and thunderstorms associated with another front. This front will likely bring a little more of a punch, as temperatures could be flirting with the freezing mark again.

Behind Monday’s cold front, cooler and drier air will move into the region as surface high pressure builds over the central Gulf Coast for the rest of the week. Nighttime lows area wide should remain above freezing and daytime highs will be near 60. There is high confidence that another round of active weather will return by next weekend. A shortwave trough will dig into the Midwest by Saturday. Deep southwest flow ahead of this feature will result in moisture return at the surface. The chance for light rain will increase from the west during the day Friday and then heavy rain and storms are possible along the central Gulf Coast Friday night and Saturday. The location of heaviest rain and storm will be dependent on if and where a surface low may form. A cold front passing around Sunday would end unsettled weather and bring another round of cold temperatures.