A frontal boundary will push some rain through the area late on Friday night.

Today and Tonight: We are starting the weekend on a dry note. Expect partly cloudy skies with temperatures near 93 degrees. A front will begin moving through Louisiana reaching the Baton Rouge area in the late evening. Showers and storms along the front will diminish as they approach, but there is a chance for rain in the late evening through the overnight hours. Areas north and west of Baton Rouge are most likely to see rain. Overnight tonight it will be muggy with temperatures near 75.

Up Next: Rain will be back in the forecast for Saturday and Sunday as we expect a front to move through the area. Between 40-50% will be associated with a front moving through Saturday afternoon. There will be enough moisture leftover for scattered showers on Sunday afternoon too. High temperatures hovering right around 89 degrees, but if your area has rain, it will feel cooler. Overnight lows will be in the mid-70s.

The Tropics: Isaias strengthened to a category 1 hurricane late Thursday. Due to a strong upper-level steering pattern, confidence is high that Isaias will not enter the Gulf of Mexico. There are no major changes to the local forecast due to Isaias. 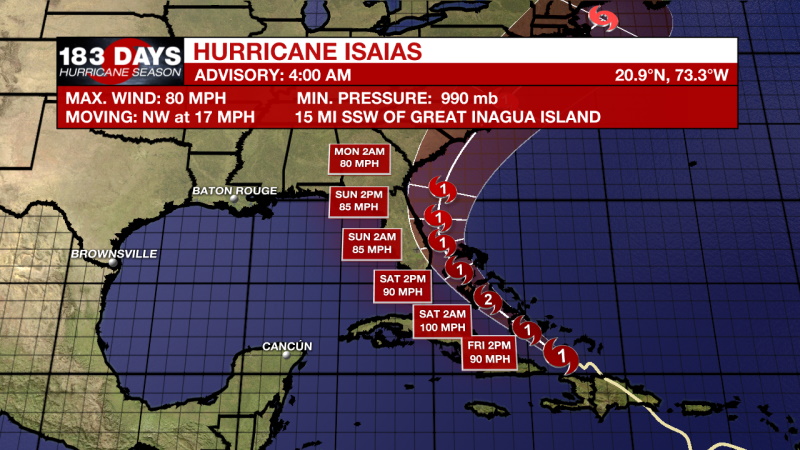 The center of Hurricane Isaias is located near latitude 20.9 North, longitude 73.3 West. Isaias is moving toward the northwest near 17 mph (28 km/h), and a generally northwestward motion with some decrease in forward speed is expected for the next couple of days followed by turn toward the north-northwest. On the forecast track, the center of Isaias will move near or over the Southeastern Bahamas today. Isaias is forecast to be near the Central Bahamas tonight and move near or over the Northwestern Bahamas and near or east of the Florida peninsula on Saturday and Sunday.

NHC will initiate advisories on Tropical Depression Ten, located about 200 miles west of the coast of Africa at 8pm CVT (2100 UTC).

An upper-level trough is dropping over the Great Lakes region. High pressure is building over the Gulf pushing out all the deep moisture. Less moisture means the air will be able to heat and cool more efficiently and highs will have no trouble reaching the 90s. A line of showers and storm associated with a front will move through the area on Friday evening likely diminishing before reaching the Baton Rouge area. We are keeping a close eye on development because there will be large amounts of CAPE and plenty of available dry air for entrainment. Showers and storms on Saturday evening will spark up ahead of a boundary. Peak heating hours will be most active.