Overall, expect a nice weekend for outdoor plans. There are a few rounds of showers and thunderstorms in the 7-Day Forecast.

Next 24 Hours: A few clouds will build in late tonight and low temperatures settle out in the low 50s. A warm front will drift northward toward the Gulf Coast on Saturday morning and that will cause isolated showers and possibly a few rumbles of thunder as the weekend begins. However, most of the activity will be limited to areas south of I-10 and many will miss rain altogether. The moisture will then be squeezed south by a fast moving, weak cold front. Therefore, sunshine will quickly return by the afternoon as highs move to the upper 70s.

Up Next: Sunday will bring a nice finish to the weekend with mostly sunny skies, low temperatures in the mid 50s and high temperatures in the low 80s. Clouds will return on Monday in advance of the next frontal system set to bring rain and thunderstorms overnight into Tuesday. This one does not look as potent as the previous two but nonetheless, some ingredients will be available. There could be just a short window on Tuesday for one or two strong to severe storms to get in the fold, but a few more conditions would need to come together for that to happen. A much cooler air mass will come in behind that front and low temperatures could return to the 40s before the end of next week. CLICK HERE for your detailed 7-Day Forecast. 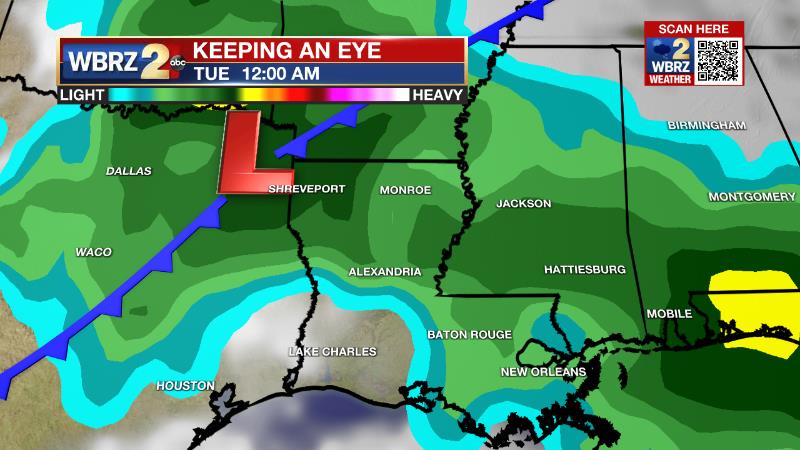 The Explanation: A warm front will drift northward up to the I-10 corridor on Saturday morning as a weak trough of low pressure zips across the Gulf Coast. There should not be enough instability at the surface for this system to produce more than showers and perhaps an embedded thunderstorm. The trailing cold front will quickly swing through on Saturday afternoon and skies should respond to the injection of drier air by clearing. In fact, sunshine is expected to end the day. The quiet and dry conditions will last through Sunday but the upper level pattern will remain active with another trough moving in on Monday. A warm front will lift through the region during the afternoon and evening hours with enough instability in the upper levels of the atmosphere for showers and thunderstorms to develop. Tuesday morning, the upper level trough will pivot to a negative (northwest to southeast oriented) tilt as a surface low develops over Texas and Arkansas. Low level winds will be rather strong and supportive of severe weather but the surface air mass is expected to remain stable. By the time the air mass destabilizes, the upper level winds will be weakening and turning to the southwest, which would be unfavorable for severe thunderstorms. As of now, while severe weather cannot be ruled out, it looks like the conditions may not align at the right time. If the instability can show up alongside of the favorable upper level winds early in the day, a "surprise" kind of event is possible. The upper level trough axis will dig into the Southeast after that and usher in temperatures that are 5-10 degrees below average to end next week.