BATON ROUGE - On Tuesday, Feb. 16 residents across the capital city woke up to a Fat Tuesday unlike any other.

As the coldest Mardi Gras on record, many locals had no choice but to replace typical celebratory parades and parties with hopes that freezing temperatures would warm up and that electricity would soon be restored to neighborhoods experiencing power outages.

Freezing temperatures crept into the area overnight Sunday (Feb. 14) lingered and caused dangerously icy conditions that are not expected to fully leave until Wednesday (Feb. 17). 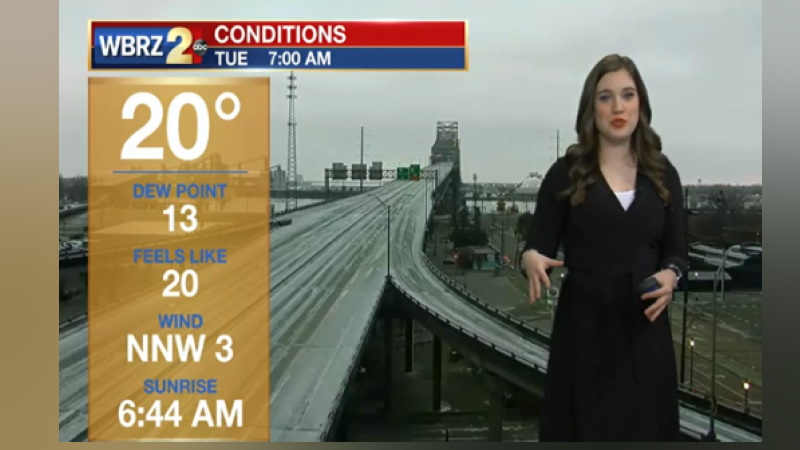 On Mardi Gras morning, as of 6:30 a.m., Baton Rouge was dealing with a temperature of 20 degrees Fahrenheit, though it felt more like 12 degrees.

Local roads were shutdown, meaning a number of residents had to hunker down in homes that lacked power due to widespread outages. According to Entergy, as of 6:45 a.m., just over 11,000 in East Baton Rouge Parish were still without power.

That said, some are leaving freezing conditions in homes without heat to take refuge in local hotels.

WBRZ's Nadeen Abusada braved the icy winds and roads to check out weather conditions and even speak with locals to get a feel for how many people have been making reservations due to outages.

Looks like workers are salting the interstate this morning to melt the ice. This is on I-10 right before the I-10 1-12 split. @WBRZ @wbrztraffic pic.twitter.com/FcMxPh5DN4

Abusada found that many hotels were booked solid.

She spoke with one woman who expressed deep gratitude for finding a hotel with occupancy.

"It's packed, they are fully occupied now," the woman said.

Hotels were not the only businesses that suddenly found themselves in demand, stores that sell firewood were also flocked by individuals experiencing outages and desperate for a heating source.

While locals do what they can to stay warm and safe, power companies say efforts to restore electricity are underway.

WBRZ will continue to monitor weather conditions and update viewers throughout live coverage that can be viewed online here throughout the day.

In addition to this, WBRZ’s Weather Team is keeping an eye on the situation and can be followed on Facebook and Twitter for frequent updates.