The capsule’s four passengers are flying exceedingly high, even by NASA standards. The crew gave a live update on the mission from Earth's orbit Friday afternoon.

Until this all-amateur crew, relatively few NASA astronauts had soared that high. The most recent were the shuttle astronauts who worked on the Hubble Space Telescope over multiple flights in the 1990s and 2000s.

To enhance the views, SpaceX outfitted the automated Dragon capsule with a custom, bubble-shaped dome. Photos of them looking out this large window were posted online after their first day in space, but otherwise little has been released publicly since liftoff.

The passengers — two contest winners, a hospital worker and their billionaire sponsor — will wrap up their three-day flight this weekend with a splashdown off the Florida coast, weather permitting.

Hayley Arceneaux, a childhood cancer survivor, chatted Thursday with patients at the hospital that saved her life almost 20 years ago: St. Jude Children’s Research Hospital. According to a tweet, the children wanted to know whether there are cows on the moon — like in the nursery rhyme. The video linkup was not broadcast live. 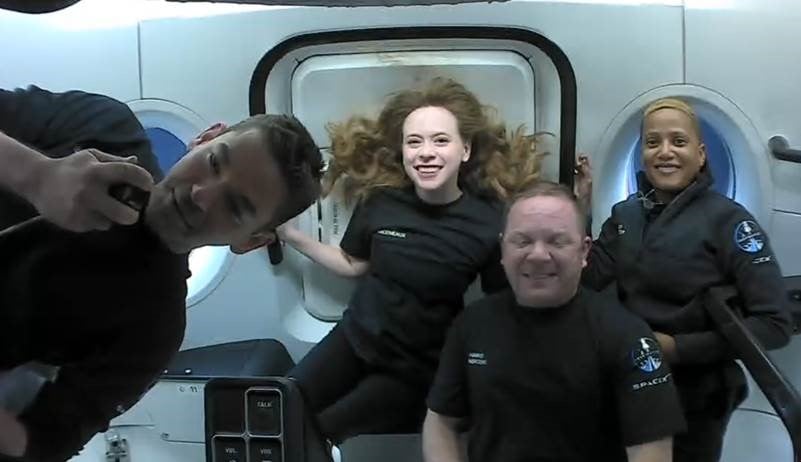 Now a physician assistant at St. Jude, Arceneaux took up an old photo of herself — bald from treatment for bone cancer at age 10. She said before the flight that she wanted the children to see her long hair floating in weightlessness, to give them hope.

At 29, Arceneaux is the youngest American in space.

Pennsylvania entrepreneur Jared Isaacman, 38, purchased the entire flight for an undisclosed amount. He’s seeking to raise $200 million for St. Jude through the flight he’s named Inspiration4, half of that coming from his own pocket.

The two other Dragon riders won their seats through a pair of contests sponsored by Isaacman: Chris Sembroski, 42, a data engineer, and Sian Proctor, 51, a community college educator.

All four share SpaceX founder Elon Musk’s quest to open space to everyone.

“Missions like Inspiration4 help advance spaceflight to enable ultimately anyone to go to orbit & beyond,” Musk tweeted Thursday after chatting with his orbiting pioneers.

The Associated Press Health and Science Department receives support from the Howard Hughes Medical Institute’s Department of Science Education. The AP is solely responsible for all content.