CENTRAL - The U.S. is home to over 1.5 million nonprofits and many of these organizations struggle to obtain funding.

When asked what sorts of challenges OMG has faced, Baunchand laughed good-naturedly and said,"Not having any money."

Though OMG is a relatively small outfit, with a home-base off Joor Road in Central, ever since it's emergence in 2013 it's had an impressive impact.

Baunchand says the nonprofit was inspired by her efforts in kicking off a 2013 National Women's and Girl's Day conference. After the conference, she says participants reached out to her, telling her the one-day session had been a hit, but they wanted more. So, Baunchand delivered. She created OMG, a nonprofit that focuses on teaching girls how to enhance their self-esteem, develop leadership qualities, and that even delves into information related to HIV and STD awareness. Eventually, OMG began to meet weekly and garner more attention for its efforts in the community.

One of its volunteers, a Walmart employee named Grace Guy, was so impressed by OMG's work that she entered it into one of Walmart's national contests.

The contest was known on social media as #SparkKindness and the #WalmartAssociateChallenge. It invited Walmart employees to share how they'd been 'sparking kindness' in their local cities and towns. Guy took the opportunity to share stories of her work with OMG. Her response, coupled with OMG's visibility in the community, impressed Walmart officials. So, when Guy recommended that OMG become the recipient of the store's $10K grant, Walmart listened.

On Thursday, Nov. 7 associates with the Walmart on Hooper Road in Central surprised Baunchand with a $10,000 check for her nonprofit.

Baunchand, thrilled with Guy's recommendation and with Walmart's generosity, says the funds will go towards relaunching OMG’s website, supporting its weekly meetings and community outreach initiatives. 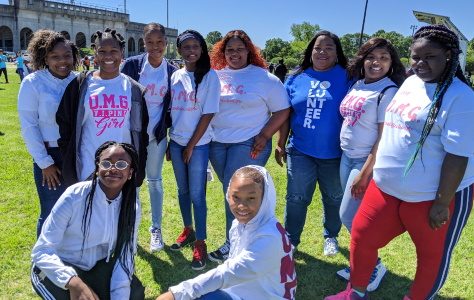 In the past, when money was tight, Baunchand says she encouraged her OMG crew to carry themselves as if they were a part of a billion-dollar company, by telling them, "Even though we're struggling, we're not going to look like we're struggling."

Now that the nonprofit has more funding under its belt, OMG representatives will continue to carry themselves with dignity. But thanks to a helpful volunteer and a grant from Walmart, they'll do so without the added burden of wondering how they're going to pay their next bill.

Click here to learn more about volunteering with or becoming a member of OMG.