BATON ROUGE – The owner of a convenience store on Airline Highway is trying to catch a thief. Mid-day Monday, a young man entered Mohammad Alishamaa's store, Mobil Mar, and snatched hundreds of dollars out of an elder veteran’s hands.

“One thing I hate more than a thief is someone taking advantage of an older man,” said Alishamaa. “And on top of that a veteran that literally served our country and protected us. It made me so mad.”

The veteran, who visits the store daily, was trying to get a money order. The young man standing next to him saw him pull the money out, then took it.

Olivier, the veteran, and two other customers in the store worked together to stop the thief, grabbing him before he could flee. Olivier locked the doors, then grabbed a gun.

The thief eventually gave up and handed the veteran his money back. But, it wasn't all of it.

After handing over money, the young man left before police were called. Alishamaa having cameras up around his store, caught everything. He’s hoping someone will recognize the young man and call police. 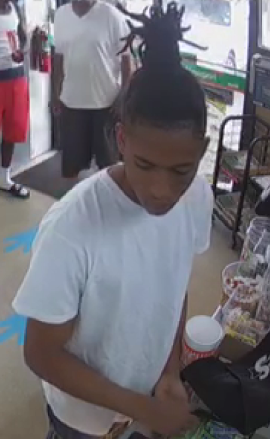 “When I see someone who does something like that, I feel like they have no limits. They'll go to any extent to do anything,” said Alishamaa.

The suspect was later identified as Jevaughn Davis. He was charged with simple robbery.