Traveling? Check out this list of new restrictions, reopenings before planning your itinerary

With leading health experts urging individuals to take extra precautions so as not to spread COVID-19, nearly every sector of the world's industries are adjusting the rules that guide their daily activities.

Included among these is the travel industry. Airlines continue to implement a host of new COVID-related procedures.

Local governments are doing the same, and these changes impact locals as well as any travelers to the region.

A recent CNN article highlighted several changes airlines and local/federal U.S. governments have implemented in the past few months. The changes that may impact travelers are listed below.

American Airlines will not serve alcohol in coach until 2022

American Airlines says it won't serve alcoholic beverages in the main cabin of its flights until January 2022. The postponement is in harmony with the extension of the US mask mandate on public transportation until January.

American says the move is part of an approach to improving safety on flights, in terms of spreading COVID-19 and curbing unruly passenger behavior.

On Thursday, the US Federal Aviation Authority proposed more than $500,000 in new fines against rule-breaking travelers, CNN reports.

The U.S. extended border restrictions and added more countries to its 'Do Not Travel List'

The U.S. Department of Homeland Security announced Friday that it is extending nonessential travel restrictions at borders with Canada and Mexico until at least September 21.

The federal government has been limiting nonessential travel along both borders since the COVID-19 pandemic began. Exceptions are in place for cross-border trade, US citizens and lawful permanent residents, as well as people traveling for reasons such as medical purposes or to attend school.

U.S. travelers are warned to avoid visiting four new destinations -- Dominica, Jersey, Montenegro and Turkey. These have been added to the highest-risk Level 4 category on the US Centers for Disease Control and Prevention's travel advisories list.

Meanwhile, Chile, Mozambique and Uruguay have all moved down to Level 3, which urges unvaccinated travelers to avoid nonessential travel to those locations.

Uruguay is only allowing citizens and residents to cross its borders, but this month the country announced that travelers with proof of vaccination would be able to enter the country as of November 1.

San Francisco is the first US city to mandate proof of full vaccinations for certain indoor activities, effective August 20.

City residents 12 years of age and older are required to show their vaccine credentials in order to enter indoor restaurants, bars, gyms and theaters, as well as large event spaces with at least 1,000 people.

New York City's new "Key to NYC" vaccination requirement went into effect August 17, and it will be enforced beginning September 13. In response to the Delta variant surge, proof of vaccination is necessary for patrons and employees of the city's indoor dining, fitness and entertainment venues.

In New Orleans, a vaccine mandate went into effect Monday and will be enforced beginning August 23. Everyone aged 12 or older needs to show proof of at least partial vaccination or a negative PCR test taken in the past 72 hours to enter indoor restaurants, bars, gyms and entertainment spaces.

Face masks are required at all U.S. National Parks

The mandate applies to everyone on the premises, regardless of their vaccination status or transmission levels.

Officials say the requirement will be in effect until further notice.

Navajo Nation parks and monuments are reopening to the public

The Navajo Nation manages a number of historical parks and monuments across land that is a part of the Native American reservation in Arizona, Utah and New Mexico, and as of Monday the Navajo Nation began a phased reopening of these locations.

The reopenings include the Four Corners Monument and Canyon de Chelly, according to the Navajo Nation Parks and Recreation.

Monument Valley is temporarily closed due to potentially dangerous weather, but will reopen once all roads are cleared and maintained.

Most businesses, including restaurants, casinos, museums and parks, are now allowed to operate at 50% capacity, CNN reports.

The adjustments mentioned above occur as the U.S. reports a total of 37.7 million COVID cases and 628,000 deaths.

Additionally, as of Friday, a total of 199,606 new COVID cases were reported in the U.S. 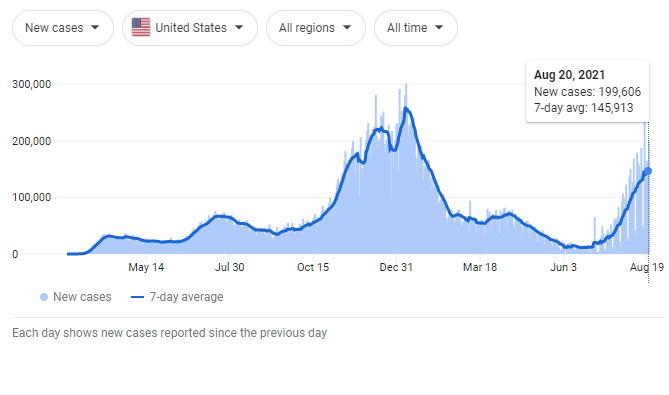