While one day of showers and thunderstorms is behind us, a few stronger rounds are on the horizon. The active pattern will last through at least Sunday. The National Weather Service will investigate damage created by a rogue storm cell in East Baton Rouge and East Feliciana Parish on Wednesday evening. Tree and structural damage occurred as a tornado warned storm passed over around 6pm. Stay tuned to find out the NWS survey results.

Today and Tonight: With a little sun early, temperatures may take a run at the mid 80s, but don’t have far to go after a morning temperature well above average in the upper 70s. A cluster or line of rain and thunderstorms is expected to move into the area by late morning and drape across the area during the afternoon hours. Storms will be capable of torrential rain, frequent lightning, damaging wind gusts and hail. Expect this to impact the drive home. Please avoid any flooded roads, and pull off and get inside a safe shelter if you end up driving into an area under a weather warning. There are signs that overnight, another batch of rain and thunderstorms push into the area, and these could be strong too. 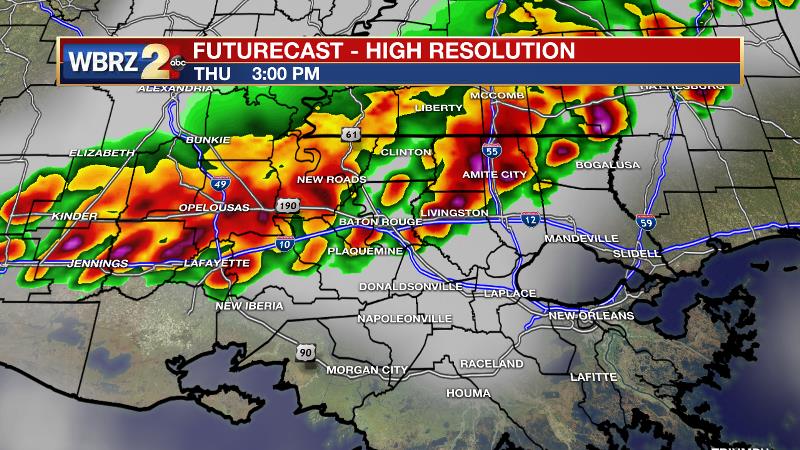 Up Next: Should this scenario play out, Friday will begin particularly wet and stormy as well. Another round or two of rain and storms will occur on Saturday and Sunday. By the end of the weekend, an additional 2-4 inches of rain is expected, but as we commonly see, some locally higher totals could result in areas of street and poor drainage flooding. Spreading the rain over multiple days though should help ease any larger flooding problems. By virtue of clouds and precipitation, low temperatures should remain above average while high temperatures are near or just below average. 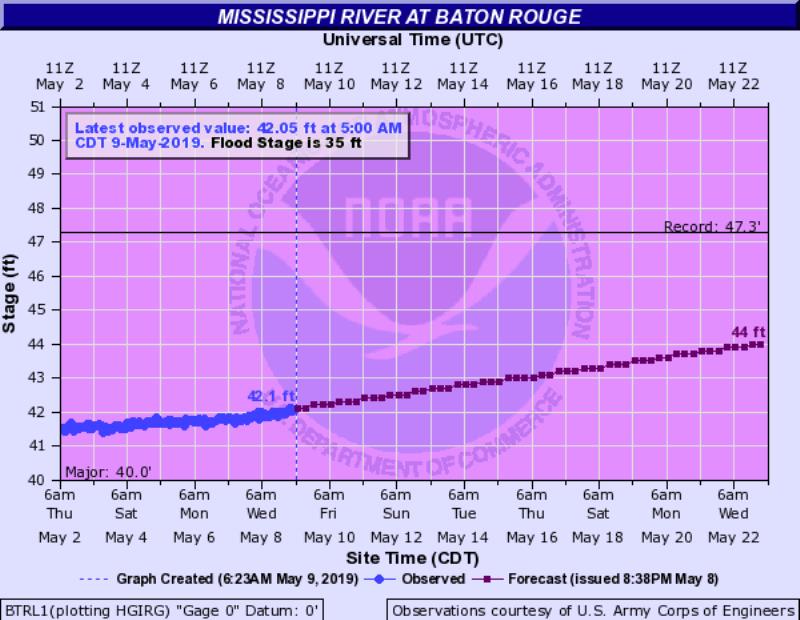 The Mississippi River: At Baton Rouge, major flood stage continues with a level of 42.0’ as of Thursday morning. Peaking at 44.1’ on March 19, the river set its 7th highest recorded crest at Baton Rouge. In addition, at 124 days this marks the second longest period above flood stage. Heavy rain that fell north of the area will keep the river high through Mid-May. At about 44’, an updated forecast now suggests this second crest could challenge the first earlier this year. Still, the high water is primarily an issue for river traffic and river islands, although some inundation will continue unprotected low-lying areas. The city of Baton Rouge and the main LSU campus are protected by levees up to 47 feet. Some soggy areas and seepage may be noted due to the long duration of high water placing pressure on the levees. As some of the Mississippi River diverts into the Atchafalaya River, gauges at Krotz Springs and Morgan City will stay high as well. This creates backwater flooding in parts of Assumption Parish in areas such as Stephensville and around Lake Palourde. Like Big Muddy, this is expected to be a prolonged event but is not uncommon for the time of year.

A weak cold front will move in from the northwest by Thursday and Friday. This front will stall and become more diffuse. A broad upper level trough over the western two-thirds of the country will put the local area under deep, southwest wind flow, which is a setup that favors rounds of rain and thunderstorms—especially with a forcing mechanism present in the form of a stalled front. High instability and drier mid-level air could even lead to some damaging wind gusts and hail on Thursday. The Storm Prediction Center has the entire forecast area in a 2 out of 5 “slight risk” for severe weather to account for this possibility. Ongoing storms across Ark-La-Tex will create outflow boundaries acting as a front to generate more life around the region. A warm and very moist air mass will contribute to storm development and the threat for severe weather. The low-level winds will weaken by the afternoon hours which should lessen the threat for rotation but could also slow the progress of storm cells enhancing the chance for heavy rain. However, high instability and strong upper level winds will keep the atmosphere primed for heavy storms to maintain themselves as they push from northwest to southeast. There is some suggestion on high-resolution models, as was the case on Wednesday, that another cluster or line of storms will move through afternoon midnight before daybreak Friday. The overall pattern will likely be steady into the weekend. As subtle upper level disturbances ride over the stalled front, we can expect additional rounds of showers and thunderstorms. We are expecting an additional 2-4 inches of rain over the area through Sunday, but along the Gulf Coast, an event like this often leads to isolated amounts that are quite a bit higher. The good news is that those amounts should be spread across 5 days, which should make runoff manageable for local rovers, but it would not be surprising to see some areas of street and poor drainage flooding.