Showers to lessen in coverage through the day

The cold front that brought strong thunderstorms to the area on Saturday morning is returning to the region as a warm front. As it slowly lifts north, scattered showers and thunderstorms are possible through Tuesday.

*DENSE FOG ADVISORY* for the shaded area. Take it easy driving and check with @WBRZtraffic for updates. #WBRZwx pic.twitter.com/m5HXDOPE0V

Today and Tonight: Your Championship Monday began with clouds, showers and thunderstorms. Overcast skies will persist for much of the day although showers and thunderstorms will just be scattered, off and on in nature. Do not expect a washout. As winds turn southerly, thermometers will climb into the upper 60s and low 70s. Overnight will be cloudy with spotty showers and patchy fog. Temperatures will steady in the mid 60s. 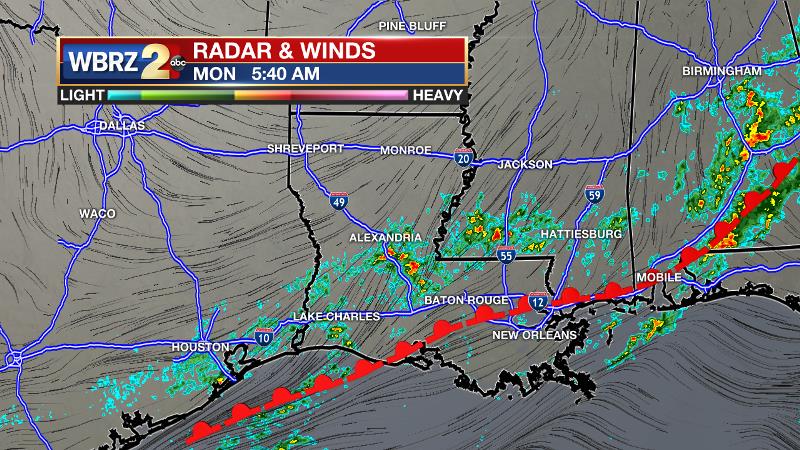 Up Next: A warm front will stall just north of the local area keeping mostly cloudy skies and scattered showers and thunderstorms in the forecast. Most of the activity will be closer to the front, north of I-10/12. In the warm, humid air mass south of the boundary, fog could be an issue each day. Temperatures will; stay well above average with highs in the mid to upper 70s and lows in the mid to upper 60s. By the end of the week, the front will again return to the area as a cold front. Another round of showers and thunderstorms is expected, though severe weather does not appear to be an issue. It also looks like the cooler air mass behind the front will have some staying power from Sunday into early next week.

A warm front will lift north through the area on Monday ending up north of I-10/12 by the evening. This system will trigger scattered showers and thunderstorms, but activity will concentrate more and more to the northern parishes and counties as the day progresses. By afternoon, though clouds will stick, mainly dry conditions are anticipated south of I-10/12. As the warm front stalls across central Louisiana and southwest Mississippi, the better chance for rain will reside there through Wednesday. South winds will continue and as unseasonable warmth and high dew points (moisture) settle into the region. However, because water temperatures of the lakes and Gulf are going to be cooler than the neighboring air, sea fog is expected to develop over the next several nights. The south winds will drive this fog well inland and some dense fog advisories may be issued by the National Weather Service as this occurs. A strengthening frontal system in the Midwest will increase surface winds by Friday causing fog to lessen in coverage. That frontal system will move into the area late Saturday. This time around, there are no signals for severe weather, but some showers and thunderstorms can be expected. The front will push through and put an end to the cloudy and muggy weather. Below average temperatures are then expected well into next week.