Morning rain and storms to slacken by afternoon

Strong thunderstorms rolled through the area on Monday morning. Gusty wind knocked power offline for some and even downed a few trees north and west of Baton Rouge.

Today and Tonight: Morning rain and storms will linger through about midday before wrapping up from northwest to southeast. Behind this action, do expect a slightly cooler (but not cool) day. Thermometers will be in the upper 80s and low 90s rather than the mid 90s. Dew points will scale back from the 70s to 60s cutting into the humidity a bit as well. Some sun may peek through this afternoon. Overnight will be partly cloudy with lows in the mid 70s.

Up Next: For the middle of the week, heat will be the bigger story as another dome of warm air builds over the middle of the country. Tuesday through Thursday, expect high temperatures to stay above average and top out in the mid 90s. As you would expect in the summer, an isolated shower or thunderstorm will be possible in the afternoon hours. Overnight lows will be in the low to mid 70s.

The Mississippi River: At Baton Rouge, major flood stage continues with a level of 42.5’ as of Monday morning. Peaking at 44.1’ on March 19, the river set its 7th highest recorded crest at Baton Rouge. At 170 days, this year marks the longest period above flood stage at Baton Rouge. The level will slowly fall, but is likely to stay above flood stage for several weeks to come. The high water will remain an issue for river traffic and river islands, although some inundation will continue for unprotected low-lying areas. The city of Baton Rouge and the main LSU campus are protected by levees up to 47 feet. Some soggy areas and seepage may be noted due to the long duration of high water placing pressure on the levees. As some of the Mississippi River diverts into the Atchafalaya River, gauges at Krotz Springs and Morgan City will stay high as well. This creates backwater flooding in parts of Assumption Parish in areas such as Bayou Chene, Stephensville and around Lake Palourde.

A squall line blown off from a cold front in the Midwest made its way through the local area Monday morning. As the line decays, showers and thunderstorms will diminish through midday. Leftover clouds may linger into the afternoon therefore holding many thermometers in the 80s. 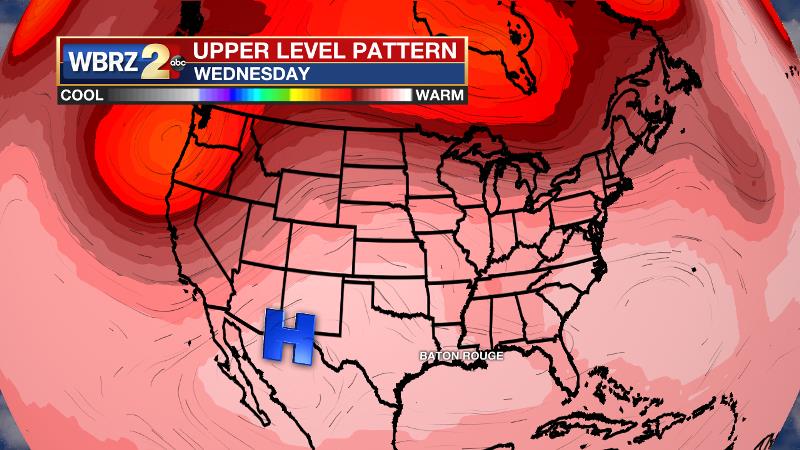 Moving into Tuesday, an upper level ridge will try to build across the Gulf of Mexico from the western Atlantic while a weak upper disturbance tracks across northern Louisiana. This will increase afternoon rain chances for areas north of I-10. mAn upper level ridge will build over the southern half of the country from Texas to the East Coast through Thursday. It will be a daily battle between daytime heating induced convection and sinking air aloft. The European model suggests the downward motion will suppress most of the convection while the American model says the daytime heating will force out scattered showers and thunderstorms. Splitting the difference, isolated rain coverage is being carried in the 7-day forecast. By the weekend, the ridge will be weakened by a deep trough moving into the northeastern U.S. This lends more confidence to daytime heating producing scattered to widespread rain and thunderstorms.