Good visibility for most during the solar eclipse

The solar eclipse begins at 11:55am today and lasts until 2:55pm. 75 percent of the sun will be eclipsed in the Baton Rouge area during peak viewing at 1:26pm. If you intend to view the solar eclipse then you will need to make certain that your solar viewing glasses are ISO 1232-2 certified.  This certification should be printed somewhere on the inside frames of the glasses and ensures that your eyes will be completely protected while viewing the eclipse.  It is not acceptable to view the eclipse wearing multiple pair of sunglasses or with any lenses that do not meet the certification safety standards. Please use common sense during the eclipse and keep your eyes on the road if driving! For more on where and how to view the eclipse, CLICK HERE.

Today and Tonight: The weather is looking largely cooperative for the solar eclipse. Given that August can bring towering clouds and scattered thunderstorms during the afternoons, a forecast for mostly sunny skies and just an isolated shower in the forecast area is not bad. Sure, one or two locations may miss out due to a cloud or shower, but the majority of the 13 Parish, 3 County forecast area can expect good viewing. Temperatures will top out around 93 degrees later in the afternoon. Thermometers may actually hold steady for an hour or two during the eclipse as some solar radiation is blocked due to the eclipse. Overnight will be mostly clear with lows in the mid 70s.

Up Next: The possibility of showers and thunderstorms will tick back up Tuesday through Thursday with scattered afternoon action. Temperatures will remain on par for the time of year with highs in the low 90s and lows in the mid 70s. 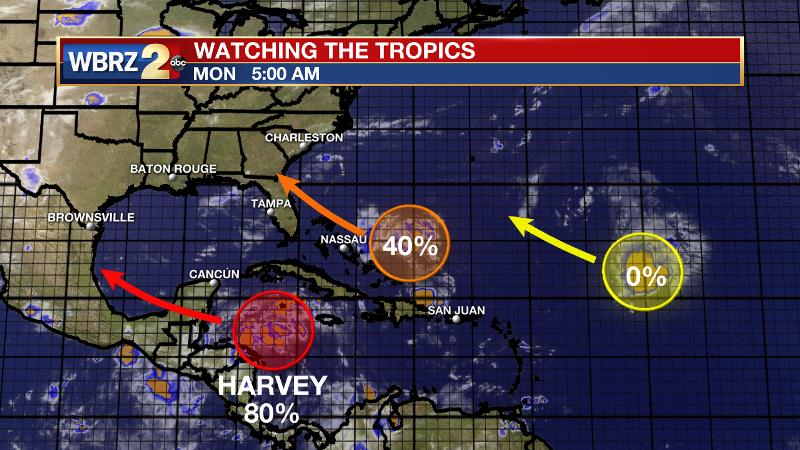 The Tropics: Tropical Storm Harvey degenerated into a remnant low over the weekend. Still churning in the western Caribbean Sea though, the system has an 80 percent chance of redevelopment after crossing the Yucatan Peninsula during the middle of the week. Even if it does survive and redevelop in the Bay of Campeche later this week, the system does not seem to pose a threat to the local area. Another tropical wave near the Bahamas has a 40 percent chance of development over the next 5 days. Regardless of development, rain and wind is expected for the islands.

Numbers of showers and thunderstorms will be low again today as the forecast area remains under a drier and sinking air mass. This dry air is moving into the area from the east and southeast. This will slowly change as a wave of moisture moves across the region on Tuesday and Wednesday. One thing that has been helping the Gulf Coast stay tropical cyclone free is the Bermuda ridge holding strong as it is connected with a surface high over the Southwest U.S. This combination provides a strong ridge pattern from 500mb up and stretches across the entire coast. But, this will change a bit through the week as the mid to upper ridge breaks down Wednesday and Thursday. This will be due to a trough, currently located over Saskatchewan, Canada digging southward into the ridge by late week. The change will occur rapidly through Tuesday and then slow as it approaches the southeast. The weakness in the ridge created by the advancing trough will keep showers and thunderstorms going over the forecast area through the end of the week.