Firefighters adopt puppy after saving him from burning apartment

NEWBURGH, NY - One lucky puppy who was rescued from a burning apartment is now being adopted by the firefighters who saved his life.

When the firefighters of the City of Newburgh Fire Department in New York were called to the second floor of a three-story apartment building in downtown Newburgh on August 3, they were told by residents that two puppies were left behind, Lt. Timothy Dexter told ABC News.

"We kept it from spreading," he said, "but two puppies were missing. I went in to search for the puppies and checked the whole front rooms."

Dexter, who's been with the department for 10 years, said another firefighter found the first puppy in a back room. Dexter said he tried to give the puppy CPR, but it did not survive.

Crews then decided to search for the second pit bull pup in the room where the fire had originated from. They thought nothing could have survived until Lt. Anthony Muhammad heard a "squeal," firefighter Jimmy Moore told ABC News.

The firefighters found little Titus hiding underneath a bed.

The owners of the pit bull, which was only 6 to 8 weeks old, insisted the firefighters take the dog to the local veterinarian and keep him. They said they were unsure they could give the dog proper medical attention. 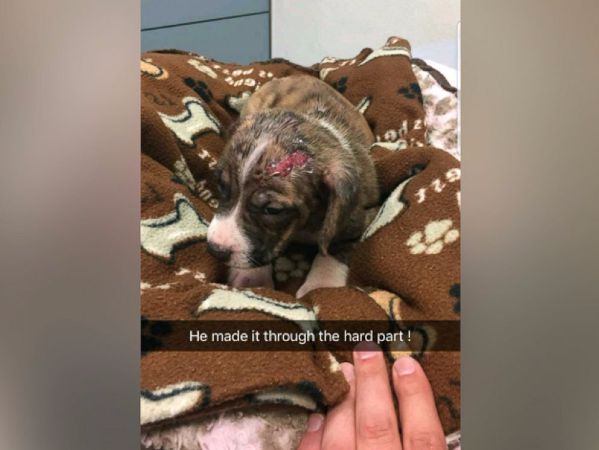 Dexter and Moore who are self-proclaimed dog lovers, live five minutes away from each other in New Windsor. So the men decided to co-adopt the puppy.

Titus' veterinarian diagnosed the dog with first and second-degree burns on his entire body from his head, to his paws and shoulders.

Still, he's adjusting to his new life with his new dog dads, the two said.

"He gets along well with his other two brothers," Dexter said. "He actually kind of takes charge of [Moore's dog named] Taz. He bullies him a little bit."

After nearly two weeks of recovery, Moore said their dog is "doing good now," despite being on four different medicines.

Dexter added that the only problem they're having is potty-training him.

"It’s going to be a little bit more difficult to potty train him thanks to his burns, but we’re working with that," he said.