While simultaneously fighting the COVID-19 pandemic, healthcare workers found themselves attending to a number of RSV cases, and many involved pediatric patients.

Children’s of Mississippi reported over 300 RSV cases in July. A month earlier, in June, the Centers for Disease Control and Prevention (CDC) issued a health advisory in response to Mississippi's surge in RSV cases.

According to an August report from the University of Mississippi Medical Center, "Respiratory Syncytial Virus, or RSV, has been rampant throughout the southeastern U.S. this summer in an off-season surge, prompting the U.S. Centers for Disease Control and Prevention (CDC) to issue a health advisory last month."

The CDC says most people recover from RSV in a week or two. It's described as a fairly common respiratory virus that usually causes mild, cold-like symptoms.

However, RSV can be serious, especially when found in infants and older adults.

As the most common cause of bronchiolitis (inflammation of the small airways in the lung) and pneumonia (infection of the lungs) in children younger than 1 year of age in the United States, the virus is something to watch for in young children, the elderly, and people with compromised immune systems.

Parents are encouraged to call a doctor if they notice their child having difficulty breathing,  drinking a sufficient amount of fluids, or experiencing worsening symptoms.

Health officials say RSV can spread when an infected person coughs or sneezes. They also warn that a person can be infected after touching a surface (such as a doorknob) that has the virus on it and then touching their face before washing their hands.

To help prevent the spread of RSV, individuals can:

-Cover coughs and sneezes with a tissue

-Avoiding close contact, such as kissing, shaking hands, and sharing cups and eating utensils, with others

-Cleaning frequently touched surfaces such as doorknobs and mobile devices 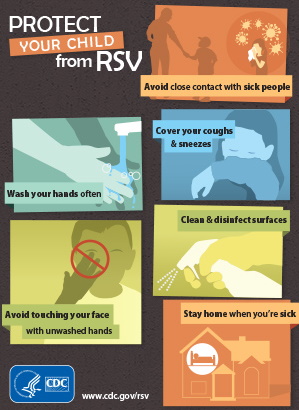 Unlike COVID-19, there is currently no vaccine to prevent RSV infection, but experts are working to develop one.