Tonight and Tomorrow: Clouds slowly increasing this evening, allowing for temperatures to cool to an overnight low of 41° with calming winds out of the southeast. Cloudy conditions extend into Sunday morning, as light winds out of the northwest drop high temperatures back down to seasonal, and around 63° through the afternoon. Clouds will break through into the early evening hours, but winds will shift out of the south to keep lows near 43° into Monday morning. 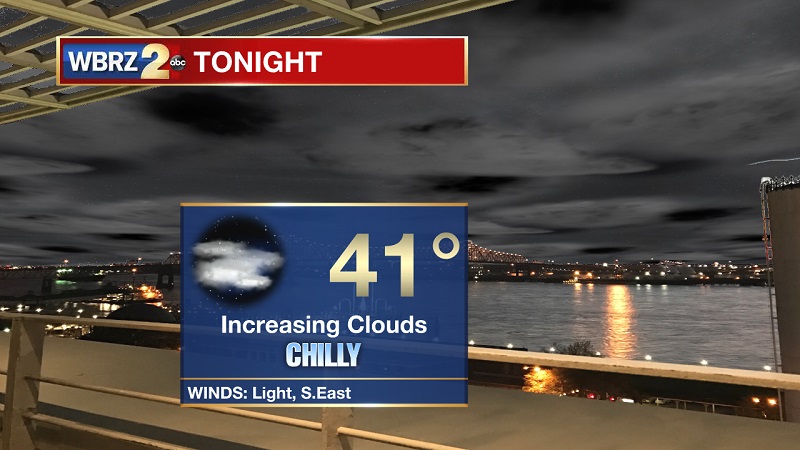 Up Next:  A strong system is poised to push through late Monday into Tuesday morning, providing scattered showers that could transition into light sleet or flurries in parts of southeast Mississippi. Regardless of experiencing winter precipitation or not, it will be light and brief, and should not amount to any snow or sleet accumulation into Tuesday morning. Temperatures will be confined into the mid-40s Tuesday, but warming back to seasonal by Friday. 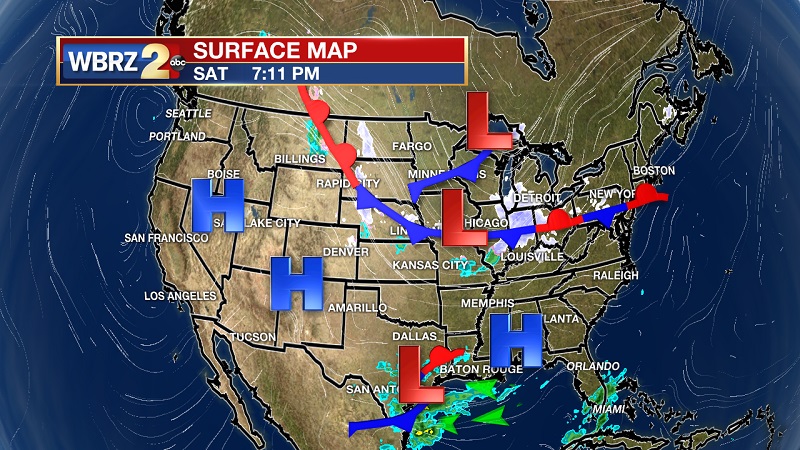 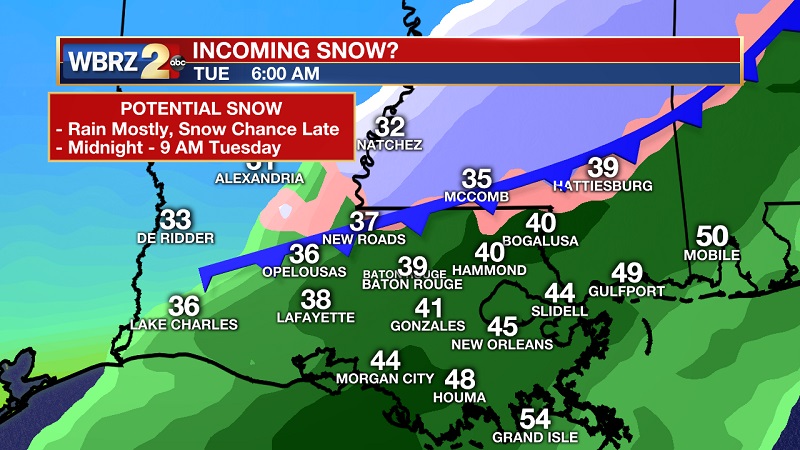 High pressure to our east will protect us from a weak system that is along the Texas-Louisiana border, bringing pockets of light showers over Central and Western Louisiana tonight. The low will dissolve overnight, drying conditions out for Sunday. Temperatures will be slightly cooler, as light winds out of the northwest will briefly bring cool air into the area. Warming will commence on Monday, as a strong system moves into the Great Plains from Canada. This system originated in Alberta, Canada, which will bring a blast of arctic air through much of the country in the upcoming week. The timing of this system is late Monday into early Tuesday morning, mainly around 9 PM Monday through 9 AM Tuesday. The peak will occur around midnight until 7 AM. This is when the majority of the showers will take place, and areas of winter precipitation is possible after 3 AM. The best chance for snow showers will be in Central and Southwest Mississippi, with a slight chance for Baton Rouge around 4 AM to 5 AM. Any winter precipitation will occur around the tail end of the showers and storm system, keeping accumulations to a minimum with a short enough timeframe to keep anything from sticking. The complexity of this forecast has to do with how closely and drastic the falling temperatures happen as the front passes. Models will get more consistent with the guidance into Sunday, but it is trending toward at least Pike, Amite, and Wilkinson counties receiving some light flurries early Tuesday morning. Skies will clear quickly behind the front on Tuesday, allowing for temperatures to reach a high in the mid-40s. A significant freeze is likely Tuesday night, as lows drop to around 28°. Warming finally returns, but very slowly through the rest of the workweek. Wednesday’s high will struggle to reach into the 50s, but conditions will rebound into the low 60s by Friday ahead of a broken system that could bring some isolated showers back into the mix on Saturday.