Big heat then drier conditions, latest on Dorian and Erin

A cold front will bring a stretch of sunny, slightly less humid weather Thursday into the weekend. Meanwhile, the tropics are characteristically busy.

1PM: Dorian is now a hurricane. The complete analysis is below. Here is a video update.

Current forecasts place #Dorian near the east coast of Florida as category three storm by early next week. For the latest details and analysis, here is a video update from @DrJoshWX. pic.twitter.com/JPvMlIKOqY

Today and Tonight: A cold front will be pushing into our area today from the north. Prior to its arrival, very warm temperatures are expected with oppressive humidity. That combination will create feels-like temperatures between 105 and 110 degrees, prompting a HEAT ADVISORY from the National Weather Service. Remember to hydrate and take it easy outdoors—especially during the afternoon. The approaching front will develop scattered showers and thunderstorms by mid-afternoon. Some could produce downpours and gusty wind. After a high temperature near 94, overnight low temperatures will be near 74 with clearing skies.

Up Next: There may be some lingering moisture along the coast on Thursday in the wake of the cold front on Wednesday, but showers should stay rather spotty. A dry and stable air mass will press in behind the front, keeping skies sunny and dew points in the mid to upper 60s. Highs will still reach in the low 90s, but heat index values will only add a couple degrees to the actual temperatures due to the lower humidity. 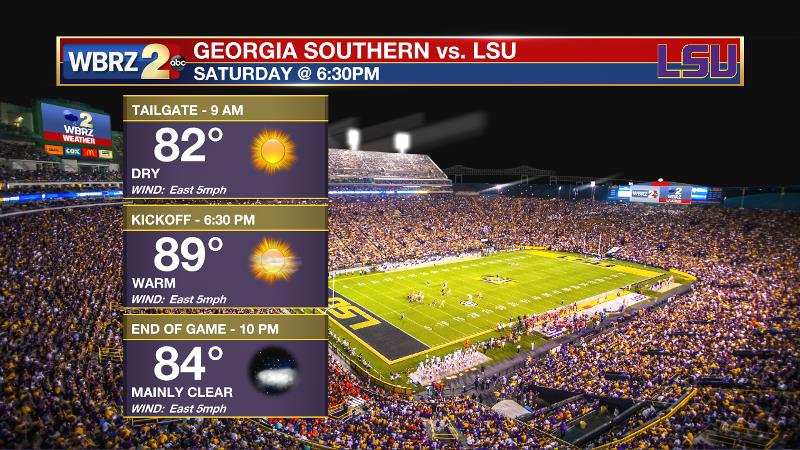 This weather pattern will not last too long, as rain chances will slowly increase by the end of the weekend. There is a potential for a spotty storm or two Saturday afternoon, but it should not impact LSU's or Southern’s opening game. 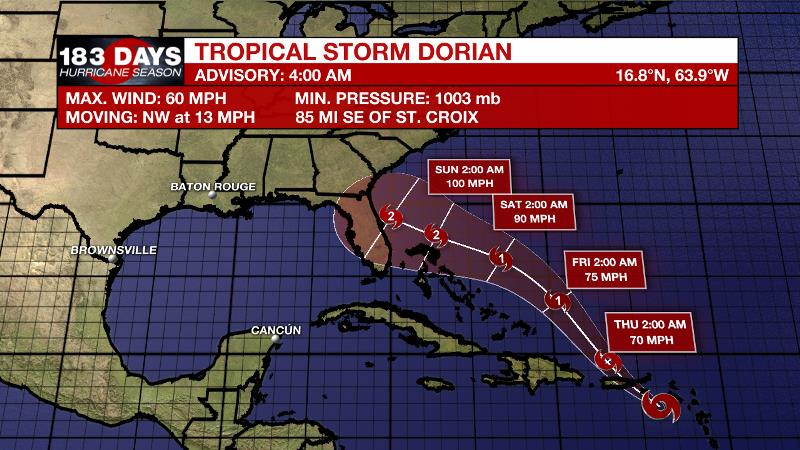 The Tropics: Tropical Storm Dorian will bring rain and wind to Puerto Rico on Wednesday. With maximum sustained winds of 60mph and a minimum central pressure of 1003mb, the storm is moving northwest at 10-15mph. this general motion is expected to continue during the next few days. Dorian is then forecast to move to the east of the Turks and Caicos and the southeastern Bahamas on Thursday, and near or to the east of the central and northwestern Bahamas on Friday and Saturday. Some strengthening is expected today, and Dorian is forecast to be near hurricane strength when it approaches the Virgin Islands and Puerto Rico.  Although weakening is possible after Dorian moves across Puerto Rico and the Virgin Islands, the storm is forecast to strengthen late this week and this weekend while passing near or to the east of the Turks and Caicos and the Bahamas. Interactions with an upper level trough and front as it nears the U.S. makes the long-term forecast for Dorian tricky. While not overly alarming for the central Gulf Coast at this time, you should continue to check-in for updates. The latest advisories are posted as soon as they are issued on wbrz.com/weather, WBRZ Weather on Facebook and Twitter.

Tropical Storm Erin formed overnight off the East Coast of the United States. This system will race out to sea as a “fish storm” bringing little more than higher surf to the Mid-Atlantic and Northeast beaches.

An upper level trough and associated cold front will push southeast through our region on Wednesday. Due to southerly winds, deep moisture will pool along the surface boundary and approaching upper trough, which will lead to good coverage of showers and storms on Wednesday afternoon. Drier air will then push south into the forecast area Wednesday night allowing less humid conditions through Saturday. A return of deep moisture will become established over the forecast area late Saturday through next Tuesday bringing back humidity and a chance of rain. There is still uncertainty with track of Dorian for next week but the latest National Hurricane Center guidance suggests that it will not be a major player in the local forecast.