Active week ahead, several fronts near the area

A much more active week is ahead with scattered to widespread showers and thunderstorms. As a result, high temperatures will ease closer to normal with no record heat anticipated like last week.

Today and Tonight: The pattern of scattered showers and thunderstorms will stick around for your Monday. While not as hot, there is plenty of “juice,” or moisture, in the atmosphere so there could be a stronger storm cell or two between 2-4PM with downpours and frequent lightning. High temperatures will reach 89 degrees by early afternoon. Activity will settle overnight with low temperatures in the low 70s.

Up Next: A stalled cold front to our north and west will continue to pull Gulf moisture onshore through the start of the workweek. This will keep humid conditions and scattered thunderstorms in the forecast. This front will begin to degrade and fall apart through on Tuesday, but a second front will approach from the northwest on Wednesday. This second front will keep wet weather persistent through Wednesday and Thursday, as scattered to widespread showers and storms are triggered by the boundary. Temperatures during this period will not change very much, reaching for the mid to upper 80s, which is near average for this time of year. Yet another cold front will tease the area next weekend. This one was sniffed out by our team early last week as the first possibility of lower humidity. However, it will likely struggle to get through our area, making us wait a little longer! 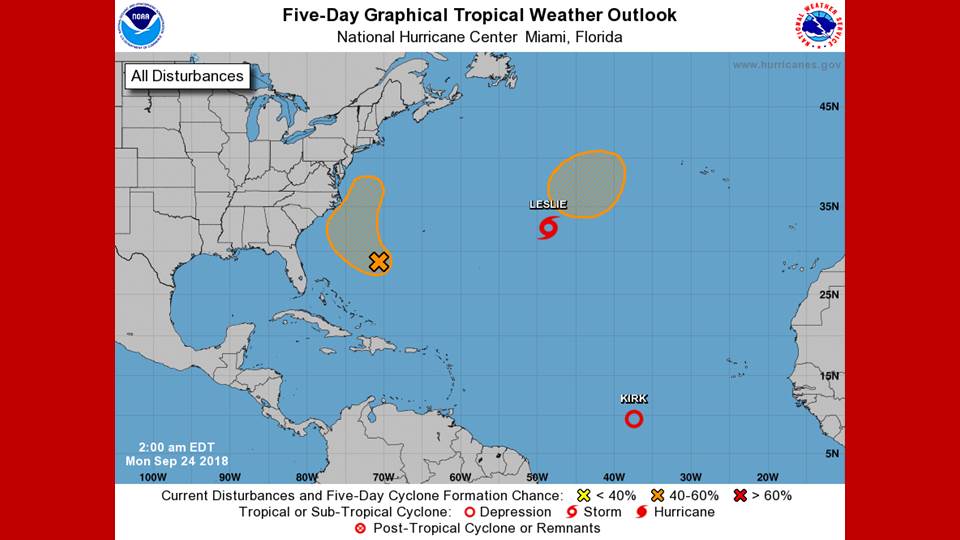 The Tropics: Kirk and Leslie are churning as weak tropical systems in the open Atlantic with little long-term prospects. Two other tropical waves have a medium chance of development. Only one near the southeast U.S. Coast could provide an impact to the States in the form of increased showers and swells along the Eastern Seaboard.

The stationary front in western Louisiana will gradually wash out over the next day or two. A second front will approach from the north, but through Wednesday will remain north of the area. The front will allow the recent trend of diurnally driven convection to continue with rather high rain coverage expected each day through Thursday. Very little day-to-day change in temperatures is expected, as that front will dissipate across central Louisiana. Yet another front will approach the area next weekend but it too looks like a big tease that will wash out before crossing the area. While this does not necessarily break humidity and provide relief, temperatures will be closer to average and the parade of fronts is an encouraging sign that the overall pattern is setting up to change.

Let's nerd out on this *possible* cold front, because we love those things 'round here (#BatonRouge). One boundary will stall and dissipate in north Louisiana by mid-week. @NWSWPC then highlights a second, next Friday; THE one we'll talk about. (1/6) pic.twitter.com/fHMaoUWzod