Overall, Wednesday will be messy with showers and thunderstorms, possibly strong and heavy. Improving weather is expected for the end of the week, lasting into the weekend.

A *TORNADO WATCH* has been issued for areas north of I-12 until 10am. Severe thunderstorms will be possible through mid-morning in those locations. Additional severe weather watched may be posted farther south, later in the day. Take shelter in a sturdy structure if warnings are issued.

*TORNADO WATCH* for the shaded area. We're tracking storms and will bring you warnings, if issued. #WBRZwx pic.twitter.com/Ap4pgwCE7o

A *FLASH FLOOD WATCH* has been issued until 6am Thursday for Baton Rouge and much of the I-10/12 corridor. Localized street and poor drainage flooding is possible. Please do not drive across flooded roads.

A *DENSE FOG ADVISORY* has been issued until 9am for areas south of I-12. Expect reduced visibility commuting southward toward New Orleans and the Louisiana Coast. Reduce speed and use low beam headlights.

Today and Tonight: A surface low pressure system will ride eastward across a front stalled across the I-12 corridor. Widespread rain and thunderstorms are expected north of I-12 through the day. Activity will be a bit more scattered in the Baton Rouge area and locations south of that but with more warmth and unstable air in place, a window of opportunity will open for strong thunderstorms, especially during the afternoon hours. The Storm Prediction Center has issued a 2 out of 5 “slight risk” for severe weather across the entire forecast area. However, the better the chance for severe weather will be south of I-12. Isolated tornadoes, gusty wind and hail are all possible. Additionally, downpours could leave behind 1-3 inches of rain by the end of this event. The highest amounts will occur north of I-12. Showers will continue overnight as temperatures fall back into the mid 50s.

Up Next: Thursday may begin with some lingering showers but much of the day will be dry although cloudy. High temperatures will be below average in the mid 60s followed by a night in the mid 40s beneath clearing skies. Clear and seasonable weather is expected through Saturday with the next rain chance coming early next week.

Today, a deep, upper level trough over central Texas will initiate cyclogenesis over southeast Texas and a surface low pressure will develop and ride along a stalled front across the central Gulf Coast. Increasing low-to-mid-level winds out of the southwest will cause ample moisture to ride over the stalled front and a widespread shield of rain will develop over central Texas, Louisiana and Mississippi. It is worth noting that the very cold air aloft as this occurs could cause some hail to develop with the early Wednesday activity. The front may drift south through the morning hours, allowing rain to spread south into the I-10/12 corridor. The position of the stalled front will set the borders for where severe weather can occur later today. Any locations falling south of these features will have a greater risk. Due to the uncertainty of how far inland the unstable air will make it, the Storm Prediction Center has painted the entire forecast area in a 2 out of 5 “slight risk” for severe weather. 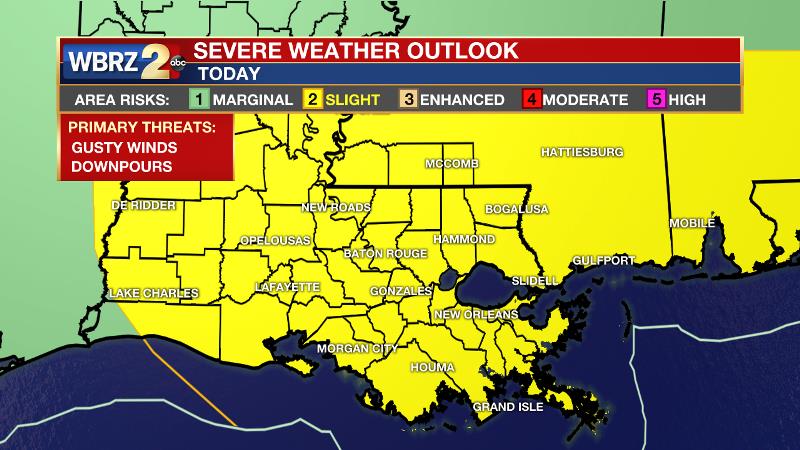 The surface low and attendant cold front will cross right over the Baton Rouge area on Wednesday afternoon and evening. Much of the rain and thunderstorms activity will occur north of the warm front in a clustered presentation on radar. However, storms near and south the surface low and cold front will benefit from more favorable lift and low-to-mid-level winds. These will be most capable of producing damaging wind gusts or an isolated tornado. Areas right along the stalled front could experience multiple bouts of heavy rain could see some street and poor drainage flooding. An event rain total of 1-3 inches is expected with the lowest amounts along the coast and the highest amounts north of I-12. 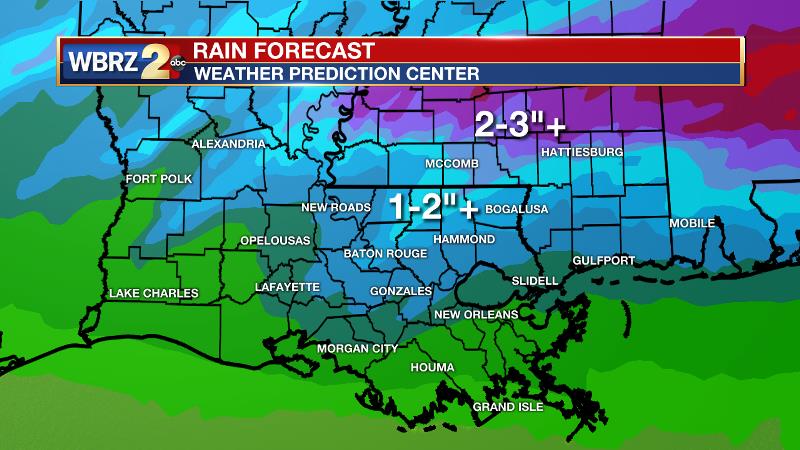 The front will sweep through the area on Thursday morning with showers ending and clouds lingering into the afternoon. The forecast area will then dry out for the remainder of the week and likely through the weekend. Temperatures will briefly go slightly below average on Thursday and maybe Friday before rebounding over the weekend.