It was just in 2015 that record setting warmth was registered for several days on either side of Christmas. Five years later and some of those marks could be challenged.

Next 24 Hours: Mostly clear skies and light, north winds will result in a chilly night around the Capital Area. Low temperatures will dive into the mid to upper 30s. Typically cooler locations north and east of the city could find some frost with potential for a brief freeze in southwest Mississippi. Despite a continued northerly breeze, mostly sunny skies will guide thermometers a bit warmer on Wednesday afternoon. High temperatures will top out in the low 60s.

Up Next: Clear skies will dominate through the weekend. The big story will be temperatures. Thursday morning will bottom out near 40 degrees with some upper 30s very possible north and east of Baton Rouge. However, by Thursday afternoon, winds will take on a southerly direction which results in warming temperatures. Highs will reach for the upper 60s and low 70s on Thursday and the upper 70s by Friday. Christmas Day right on into early next week could have afternoon readings pushing the 80s and flirting with record highs. Saturday through Monday, record highs are 83, 84 and 82. Our forecast sits just below those numbers. CLICK HERE for your detailed 7-Day Forecast. 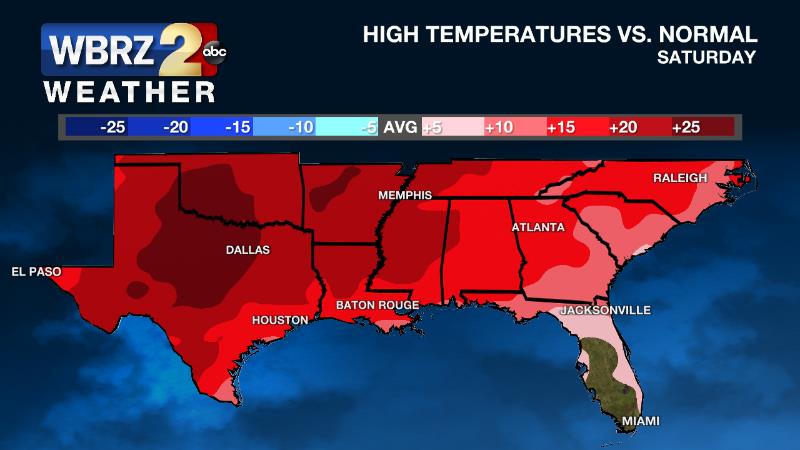 The Explanation: With ongoing northerly winds, a period of seasonably cool temperatures will persist through Thursday morning. Toward the end of the week, a surface high pressure will set up in the Southeast U.S. and an upper level ridge of high pressure will build over the Southern half of the country. These two factors will combine for warming temperatures and the extent of the upper level ridge will cause near record warmth and dry conditions Friday through at least next Monday. A weak frontal system will drop about as far south as I-20 on Tuesday with potential to wring out a few showers. However, this will largely depend on how far south the front can come; if it stays any farther north, rain chances will continue to be near zero.