While typical August weather will continue through Thursday, all eyes are on Tropical Depression Harvey which is expected to once again become a Tropical Storm or hurricane in the western Gulf of Mexico. The latest information continues to suggest the possibility of very heavy rain and flooding in parts of Texas, Louisiana and Mississippi.

Today and Tonight: Another afternoon of scattered showers and thunderstorms is ahead for the local area. Rain coverage should be about 50 percent—that is about half of the 13 Parish, 3 County forecast area will pick up measurable rain. Temperatures will make it into the low 90s before any rain or cloud cover offers a slight cool down for the afternoon. The nighttime will be quieter and seasonably muggy with temperatures in the mid 70s.

Up Next: A similar forecast is expected for Thursday. What happens next will be highly dependent on the evolution of Harvey in the southern Gulf of Mexico (see more below). 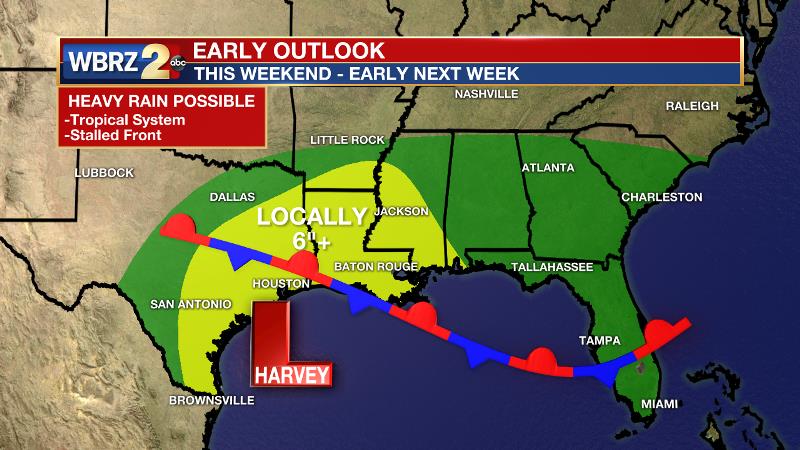 The Tropics: Harvey has regenerated into a Tropical Depression in the southern Gulf of Mexico. Forecast models are indicating that a tropical storm or hurricane could affect the Texas coast over the weekend with heavy rain spreading eastward into Louisiana and Mississippi. The National Hurricane Center has issued hurricane and storm surge watches for part of the Texas coast. Due to a stalled front along the coast, rain could last for several days—well into next week.

Several inches of rain appear to be possible at this time. It is too early to tell exactly where the heaviest amounts will occur, but the Weather Prediction Center has a large area hashed out in Southeast Texas and South Louisiana where 5-10” of rain is possible. Depending on how these factors unfold, the possibility is there for flash flooding and river flooding. 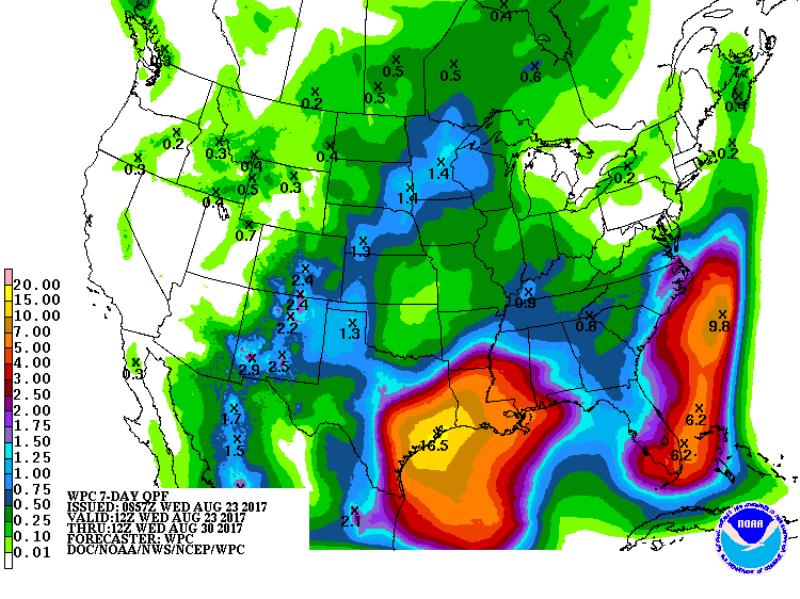 Rainfall associated with a tropical system could begin as early as Friday and last into the middle of next week. Right now, it appears as though Sunday and Monday would bring the most unsettled weather and the majority of the rain.

As of Wednesday morning, the system had yet to develop a closed center of circulation, which makes it difficult for forecast models to predict the scenario. Furthermore, the upper level features that will eventually kick the system out of the region have not yet developed which also complicates forecast confidence.

A deepening trough will begin to nudge into the forecast area over the next two days. Cooler temperatures aloft will result in increased instability and therefore greater coverage in afternoon convection. Some retreat in the trough is possible on Friday as a closed upper low focuses on a tropical system along the Texas coast. Subsidence around this closed low could result in a drier, warmer 24 or 36-hour period before the local area is possible affected. Over the weekend, a tropical system will be located over Texas. Moisture from the system will be forced east starting Saturday as a ridge builds in the Southwest, blocking northward and westward progress. The pattern will stall as a stronger mid-level wave drops into a deeper upper trough and moves directly southward through the Central Plains. The tropical system will be snared by the mid and upper trough and slowly dragged eastward along a stalled surface front. The whole complex will likely not be flushed from the local area until early next week. Whether direct or indirect, the impacts from heavy rainfall could create some issues. Although the heaviest rainfall is currently pegged for Southeast Texas per the Weather Prediction Center, there will be some potential for flooding issues locally. Once the system dissolves as begins to eject eastward, it could become a relatively strong cold front bringing a boundary through the local area. The result could be a cooler and drier air mass for a few days afterwards.