A stubborn low pressure system swirling overhead will keep clouds and showers through at least the first half of the weekend. A weak front may finally bring some drier conditions next week.

Next 24 Hours: The last of the showers will fizzle after nightfall. Low temperatures will bottom out near 70 degrees around dawn. On Friday, conditions will again vary across the area due to the position of a storm system right on top of us. In general, more clouds and showers are expected from Baton Rouge and locations to the south and east with more dry time north and west. Therefore, high temperatures will range from the mid 80s in those sections with more clouds to the upper 80s where some more sun peeks through.

Up Next: Damp conditions look to continue on Saturday with mostly cloudy skies and occasional showers and thunderstorms. For Tigers and Jags fans spending time out on campus Saturday, it does not look like a total washout but you will want to have a safe option nearby in case of lightning. The struggle for sunshine will cause below average high temperatures in the mid 80s. Though coverage may tick down a touch, isolated showers and thunderstorms will be possible Sunday too. On Monday, a weak front will push through the region. The upper levels will have already dried making showers and thunderstorms a bit more scarce than recently. Once the front passes, surface air will dry a bit too resulting in a few dry days, slightly lower humidity and lows in the upper 60s. CLICK HERE for your detailed 7-Day Forecast. 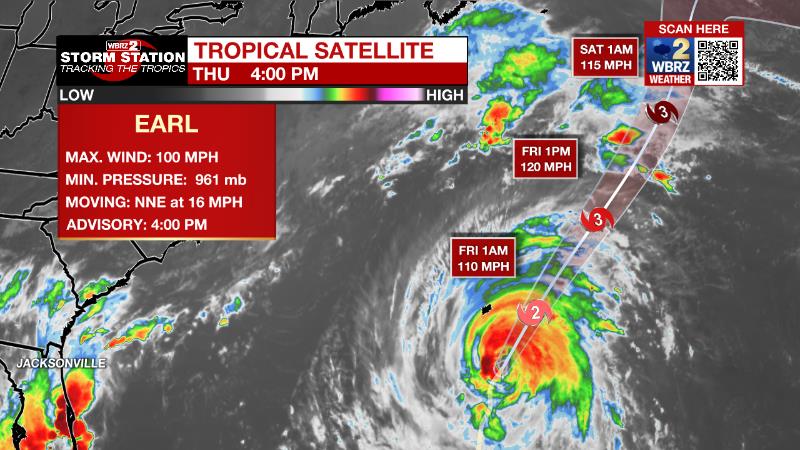 The Tropics: As of 4pm Thursday, Hurricane Earl was just over 150 miles south of Bermuda with moving to the northeast at 15mph with 100 mph winds. Earl may become a major hurricane before the end of the week while accelerating northeastward into the Atlantic Ocean. While a direct hit is not expected, tropical storm conditions are anticipated in Bermuda with heavy swells reaching as far as the eastern United States.

The National Hurricane Center has issued the final advisory on Danielle, now a post-tropical system in the North Atlantic. It will remain a powerful storm there for the next few days.

Satellite imagery indicates that the area of low pressure located about a thousand miles west-northwest of the Cabo Verde Islands has a well-defined center, and earlier satellite wind data indicated that the system is producing maximum sustained winds up to 40-45 mph to its north. However, the associated shower and thunderstorm activity remains disorganized, and has become displaced further from the center compared to this morning. Environmental conditions appear only marginally conducive for additional development, but only a small increase in organization in the associated shower and thunderstorm activity could result in the formation of a short-lived tropical storm in the next day or two. So there is a seventy percent chance of development as it moves westward to west-northwestward at 15 to 20 mph over the central tropical Atlantic.

A tropical wave located several hundred miles south-southeast of the Cabo Verde Islands is producing a disorganized area of showers and thunderstorms. Environmental conditions allow a thirty percent chance of gradual development as the system moves generally west-northwestward over the eastern tropical Atlantic.

The Explanation: An upper level low will center over Louisiana and Mississippi to end the week. The exact position of this low will be crucial as to how the weather unfolds. Locations on the northern and eastern side of the low will receive more clouds and precipitation while southern and western spots will be drier. As of now, the Baton Rouge area looks like it will reside on the northwestern flank of the upper level low. This will lead to more clouds and precipitation for areas south and east of the city with less north and west. The annoying low will finally be able to release northeastward on Saturday slightly reducing convective activity around the area. Another shortwave trough of low pressure will move from the Midwest into the Great Lakes region early next week. At the surface, a weak low will lead the parent upper level system with a trailing cold front at the surface. This front is expected to extend and crawl southward into our area losing most of its identity along the way. However, some drier air aloft and at the surface (in the form of lower dew points) may start to filter into the region by Tuesday. As a result, even though afternoons will stay warm, morning low temperatures could get into the upper 60s. All of this is climatologically plausible for the time of year.