A FLASH FLOOD WATCH is in effect for the entire WBRZ Weather Forecast Area through Friday morning. Additional rainfall of 1 to 3 inches with locally higher amounts will be possible. Areas of southern East Baton Rouge and northern Ascension Parishes are most prone to flooding issues because of 10-15 inches falling there since Monday. High rainfall rates could overwhelm drainage capacity. Ponding of water in low lying and poorly drained areas will be possible, and flash flooding could occur where the heaviest rain occurs.

Next 24 Hours: Scattered showers and thunderstorms will remain possible through the night with lows in the upper 60s. There are signs that the axis of heavier rain will start to focus a bit father west along the Mississippi River and then eventually the Atchafalaya River on Friday. Still, scattered activity area-wide and any downpours could cause some street and poor drainage issues given the super saturated soils in our area. Additionally, winds will remain elevated, out of the east-southeast at 10-20mph, possibly slowing the draining of Bayou Manchac. 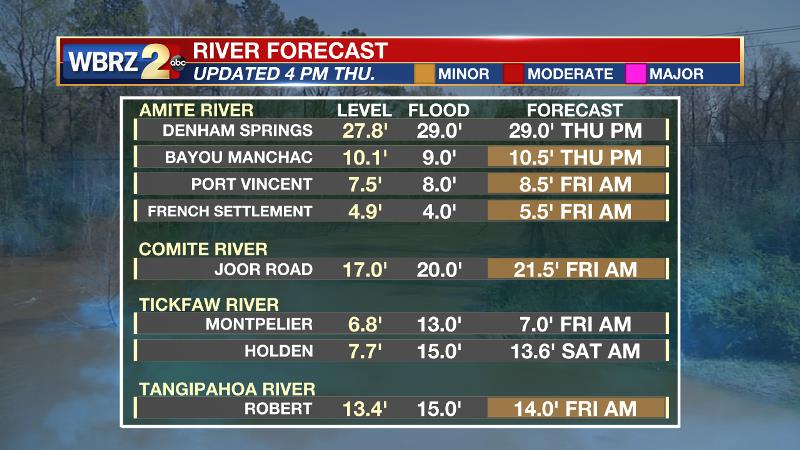 At this time, the Amite River at Bayou Manchac, Port Vincent and French Settlement, the Comite River at Joor Road and the Tangipahoa River at Robert are expected to make it into minor flood stage. For more information on the impacts you could expect near these locations, CLICK HERE and then click on the river gauge site of interest.

Up Next: Over the weekend, a drier pattern will take hold with mostly sunny and warm afternoons, topping out in the mid to upper 80s. Humidity will not quite be to summertime levels, allowing overnight readings in the mid 60s. Rain free conditions are expected through Tuesday. CLICK HERE for your full 7-Day Forecast. 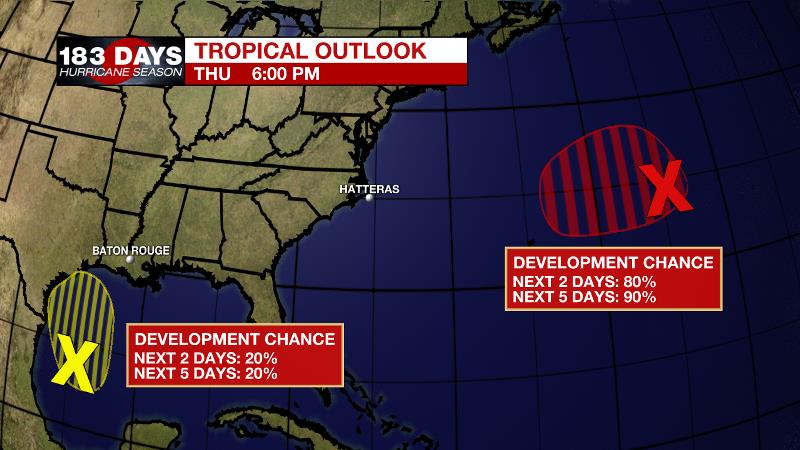 The Tropics: It is not that we want to talk about this, but June is around the corner. A non-tropical low pressure system located about 650 miles east- northeast of Bermuda has been moving northward, and recent satellite wind data indicate that the system has gale-force winds.  The low is expected to turn westward and west-southwestward over warmer waters tonight and Friday, and it will likely become a subtropical cyclone near and to the northeast of Bermuda on Friday. After that time, the system is expected to move toward the north and northeast into a more hostile environment by late Sunday into Monday. The National Hurricane Center gives a 90 percent chance of formation. This system does not pose a threat to the United States.

A disorganized area of cloudiness and thunderstorms over the western Gulf of Mexico is associated with a surface trough of low pressure. Conditions are expected to be marginally conducive for some development over the next day or so before the disturbance moves inland over the northwestern Gulf coast late Friday or Friday night. Regardless of development, the system could produce heavy rainfall over portions of southeastern Texas and southwestern Louisiana on Friday and through the weekend. The National Hurricane Center gives a 20 percent chance of additional development.

The Explanation: The main heavy rainfall axis should slowly begin to shift west toward Texas tonight and Friday but scattered precipitation will be stubborn to do exit the local area until a strengthening upper level ridge takes hold. Both moisture and instability will remain high on Friday. Primarily daytime warming will trigger activity Friday afternoon. The upper level ridge will take hold over the weekend and control the weather through next Tuesday. Due to sinking air beneath the ridge, skies should remain mostly clear. With no rain to cool off the temperatures, highs will reach the upper 80s and possibly low 90s. With slightly lower humidity, lows will generally be in the mid to upper 60s.