The Gulf Coast is in another wet setup that will last for the next several days. While there are no major flood concerns, typical trouble spots could hold water after repeated rounds of heavy thunderstorms this week.

Up Next: There are no signs of big change on Wednesday or Thursday. Each will bring one or two rounds of showers and thunderstorms, any capable of a quick one to two inches of rain. While we are used to afternoon storms this time of year, radar may be active the next two mornings as well. If there is a positive to glean from the wet weather, high temperatures can be sweltering during the end of August but rain and clouds will keep them 5 to 10 degrees below average. There are some signs of a little less action this weekend, but that is not definitive enough to bite into just yet. As of now, it looks like at least some part of the viewing area will get wet every day through next Monday. In general, 7-Day rainfall totals will range from three to five inches, but isolated pockets in excess of eight inches are possible. CLICK HERE for your detailed 7-Day Forecast. 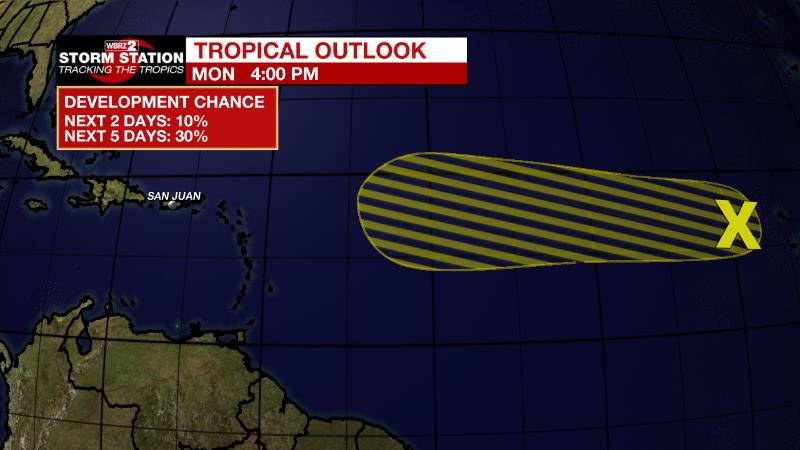 The Tropics: Showers and thunderstorms have become a little more concentrated today in association with a tropical wave located a few hundred miles west of the Cabo Verde Islands. There is a thirty percent chance of development of this system while it moves westward at around 10 to 15 mph across the tropical Atlantic during the next several days.

The Explanation Through the middle of the week, an upper level trough of low pressure will remain centered over Mid-Mississippi River Valley along with an associated stalled surface low and front. With deep tropical moisture in place, this is a setup for daily rounds of showers and thunderstorms. Activity will be enhanced at times, during off-peak hours even, as disturbances in the upper levels rotate around the upper level trough in our area. Rainfall rates could easily approach 3 to 4 inches per hour with the strongest storm cells. Through Tuesday, storms will be moving quick enough that this will not be much of an issue with regard to flooding. However, by Wednesday, as a weak surface low pressure drifts closer to the area, storms will have a slower motion and the more intense rainfall rates will have a better chance of creating street and poor drainage flooding issues. Thanks to the rounds of rain and associated clouds, high temperatures will be well below average, topping out in the lower 80s on most days. By Friday and the upcoming weekend, an upper level ridge of high pressure to our east may try to nudge overhead a bit. The upper levels may stabilize and dry out enough to cut down the coverage in showers and thunderstorms but not likely enough to eliminate all convection.