The National Weather Service will maintain a HEAT ADVISORY across the forecast area (except St. Mary Parish) for one more day. By the middle of the week, afternoon showers and thunderstorms should increase in number to spell relief. 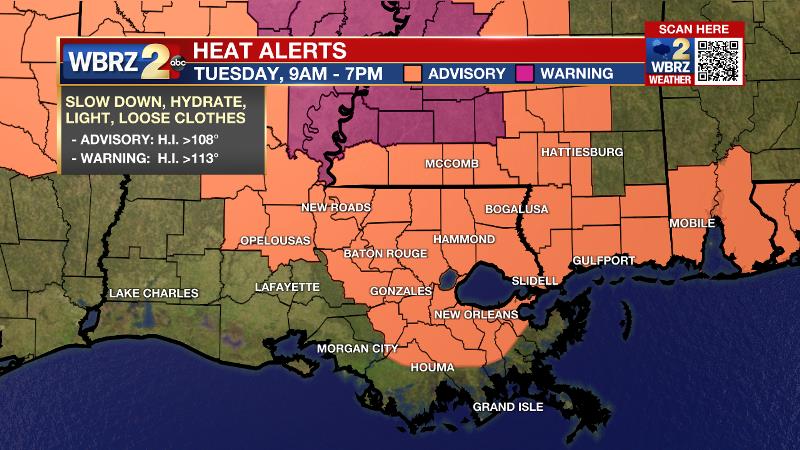 Next 24 Hours: Another warm, muggy and uncomfortable night is ahead. Any clouds will gradually diminish to mostly clear skies. Low temperatures will stop around 76 degrees. Tuesday will also be hot and humid. High temperatures will top out around 94 degrees with feels-like temperatures between 105 and 110 degrees. A pop up shower or thunderstorm is possible in the afternoon beneath otherwise mostly sunny skies.

Up Next: Wednesday will be a transitional day. Temperatures will still climb into the low to mid 90s but there should be a slight uptick in afternoon showers and thunderstorms. Thursday and Friday, many more locations will receive rain and this will cut back on the sustained heat across the area. High temperatures will be closer to seasonal averages in the low 90s with low temperatures remaining in the mid 70s. Humidity, unfortunately, will not be breaking any time soon. CLICK HERE for your full 7-Day Forecast. 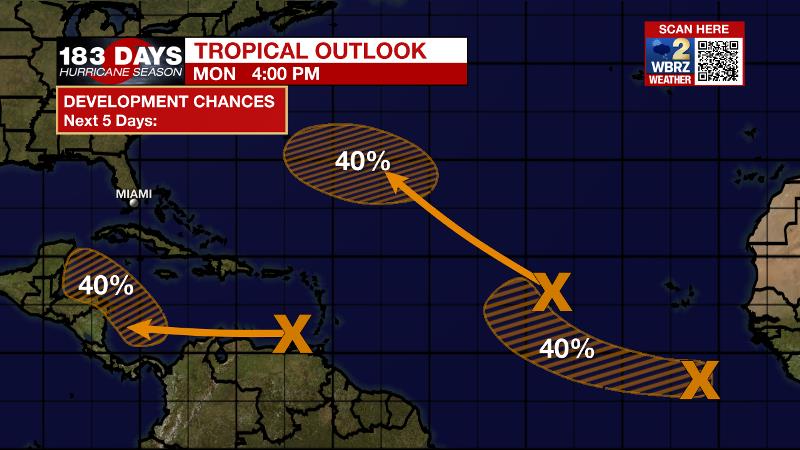 The Tropics: As of 4pm Monday, what remains of Tropical Depression Henri continues to produce rain over New England. It will move out to sea tonight into tomorrow.

A broad low pressure system is producing disorganized showers and thunderstorms over the eastern tropical. There is a 40 percent chance of formation over the next 5 days as it drifts northwestward into the central Atlantic.

Another area of disturbed weather has developed in association with a low pressure system located more than 500 miles southeast of the Cabo Verde Islands. There is a 40 percent chance of development while it moves west-northwestward  over the eastern Atlantic.

The Explanation: The hot conditions will hold on for another day or so. The upper level ridge, responsible for excessive heat over the weekend and into the beginning of the week, will expand some but also drift northwest and center over the Plains States. On the southern rim of the ridge, a little bit more instability should become available for spotty showers and thunderstorms on Tuesday, especially south of the highways, and this trend will be even more noticeable by Wednesday. While the forecast models advertise scattered to widespread coverage in showers and thunderstorms, this is not a lock. The upper levels of the atmosphere may remain too dry for the bullish rain outcome. For this reason, the forecast keeps showers and thunderstorms more isolated to scattered through Wednesday. However, by Thursday, an inverted trough and deeper slug of moisture will move in from the southeast. Even if takes some time for the atmosphere to saturate, the late summer moisture will overcome and the inverted trough should kick out plenty of showers and thunderstorms for the final two days of the workweek. Another ridge may build over the Southeast by the weekend. At the same time, forecast models are trying to sniff out some tropical disturbances in the Gulf of Mexico. Of course, there is no semblance of agreement in anything at this point and therefore no reason for immediate concern. However, that ridge would be a key player in steering or blocking any tropical system as it pertains to our area.