Moving into the weekend, long duration heat and steam will be interrupted in several neighborhoods by afternoon showers and thunderstorms. Neither weekend day will be a washout though.  Approximately 10 percent of the 13 Parish, 3 County Forecast Area received rain on Thursday afternoon. This fell in line with the forecast coverage. Most of the activity was limited to the afternoon hours. 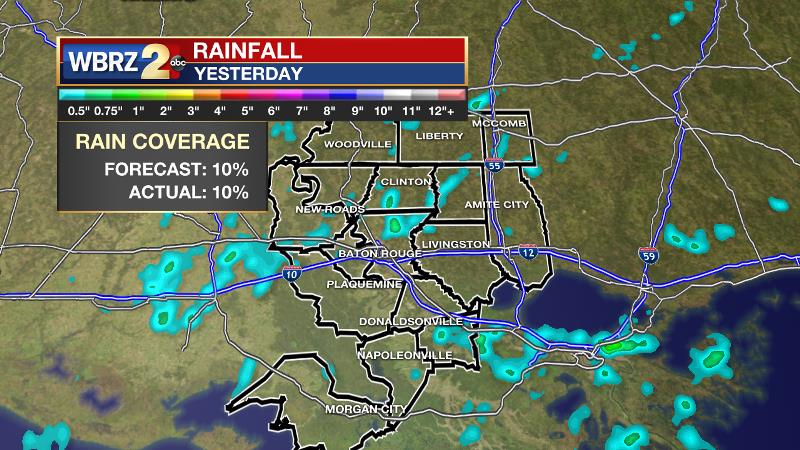 Today and Tonight: Looping the same weather for a third consecutive day partly sunny skies will give way to highs in the low 90s by early afternoon. Some clouds will bubble up and an isolated shower or thunderstorm is possible. Overnight, any activity will ease with a low temperature near 75.

Up Next: By the weekend, a bit more instability in the atmosphere may allow for a slight uptick in shower and thunderstorm development, especially during the afternoons. Actually, convection could bubble up prior to lunch time on Sunday, which is expected to be the more active of the two days. Highs may stop just a degree or two shy of average as a result. Into early next week, it appears as though a weak front could move into the region. There is high confidence that this boundary will allow for more numerous showers and thunderstorms. However, it is still unclear if this front will be able to scrape through the region to provide a reduction in heat and humidity.

Every now and then a mid-summer cold front visits the Gulf Coast. There is confidence that one will come far enough south early next week to create an uptick in showers and thunderstorms. #LaWX #MsWX (1/3) pic.twitter.com/L9UYWdKCDm

The Mississippi River: At Baton Rouge, major flood stage continues with a level of 42’ as of Friday morning. Peaking at 44.1’ on March 19, the river set its 7th highest recorded crest at Baton Rouge. At 195 days, this year marks the longest period above flood stage at Baton Rouge. The level will slowly fall, but is likely to stay above flood stage for several weeks to come. The high water will remain an issue for river traffic and river islands, although some inundation will continue for unprotected low-lying areas. The city of Baton Rouge and the main LSU campus are protected by levees up to 47 feet. Some soggy areas and seepage may be noted due to the long duration of high water placing pressure on the levees. As some of the Mississippi River diverts into the Atchafalaya River, gauges at Krotz Springs and Morgan City will stay high as well. This creates backwater flooding in parts of Assumption Parish in areas such as Bayou Chene, Stephensville and around Lake Palourde.

An inverted trough will traverse the northern Gulf of Mexico over the weekend. Due to this, an increase of showers and thunderstorms can be expected, but should follow the normal timing pattern. A longwave trough will dig into the Eastern U.S. early next week and send an actual cold front all the way to the Gulf Coast. For this reason, showers and thunderstorms will be more widespread on Tuesday and possibly Wednesday. This front is expected to slow over the area and could become a focus of heavy rainfall, given interactions with daily marine breezes. In addition, the unusual frontal presence interacting with tropical moisture could lead to some severe thunderstorms as well. There is plenty of time to monitor trends, so confidence in these aspects of the forecast will increase over the weekend. Fronts getting this far south without being strongly modified are rare to say the least, so a big cool down is not anticipated. Dew points could drop enough to allow overnight low temperatures to nudge below average.