Facing pressure from lawmakers over State Police cover-up, Edwards to meet with Black politicians; US Attorney tries to help clear the air

House Speaker Clay Schexnayder released a statement Monday in response to a recent report from the Associated Press claiming that Governor Edwards received a text from then-LSP Superintendent Kevin Reeves hours after Greene's death saying the man died after a "violent, lengthy struggle" with troopers. That text conflicted with what the agency later said to Greene's family, who were told he died in a car crash.

"The revelations detailed by the Associated Press regarding Governor Edwards' involvement in the alleged cover-up in the cause of death of Ronald Greene are greatly disturbing," Schexnayder said. "This would demonstrate gross misconduct and the highest level of deceit on behalf of the governor and others."

Greene died after a high-speed pursuit through the Monroe area in May 2019. Though police told Greene's family he died from injuries sustained in a crash during the chase, body camera video leaked two years later showed Greene was alive when troopers pulled him from his vehicle after the chase. The footage showed troopers beating, tasing and dragging a handcuffed Greene by his legs.

Eugene Collins with the Baton Rouge NAACP said, "For anyone that believes that the governor got a text message said thank you and at no point over the past three years, didn't attribute the text to Ronald Greene, I've got some magic beans I want to send you. If you believe that, something is not clicking right in your head."

The NAACP finds this severely demonstrates a need for our governor to be fully transparent with our great state. We feel that our Governor has seemingly missed the mark so far.

Governor Edwards, who and when was anyone within your administration made aware of Mr. Greene’s actual cause of death? When did you learn the truth, Governor? We call on Governor Edwards, as the Elected Leader of our great state, to be forthcoming and transparent regarding what he knew and when.

As the oldest civil rights organization in the country, the NAACP will continue to support Mr. Greene’s mother, Mona Hardin, as well as all members of our community - not only in the pursuit of justice but above all, for the truth. We will continue to demand transparency and accountability, whether involving an officer, community member, or governor."

Later Monday, the governor's office said he would meet with the NAACP Tuesday and the governor will meet with reporters after the group meet.

Gov. John Bel Edwards' office said the governor would not be available for an interview Monday but released a statement on the situation.

The statement from Edwards' office:

It is standard practice for the head of LSP to notify the Governor of incidents where a person dies in custody. He did not see, nor was he aware of, the videos of the arrest until much later in October of 2020. From the moment the Governor learned of the allegations and saw the videos, he has consistently said that the actions of the officers in the videos were disturbing and unacceptable and that the matter should be fully investigated by federal and state authorities.

The Legislative Black Caucus has requested to meet with the Governor about the serious allegations in the Associated Press article and that meeting will take place tomorrow afternoon. He will speak to and take questions from the media after that meeting.

The governor's office released the text message thread between the governor and then-Col. Reeves. 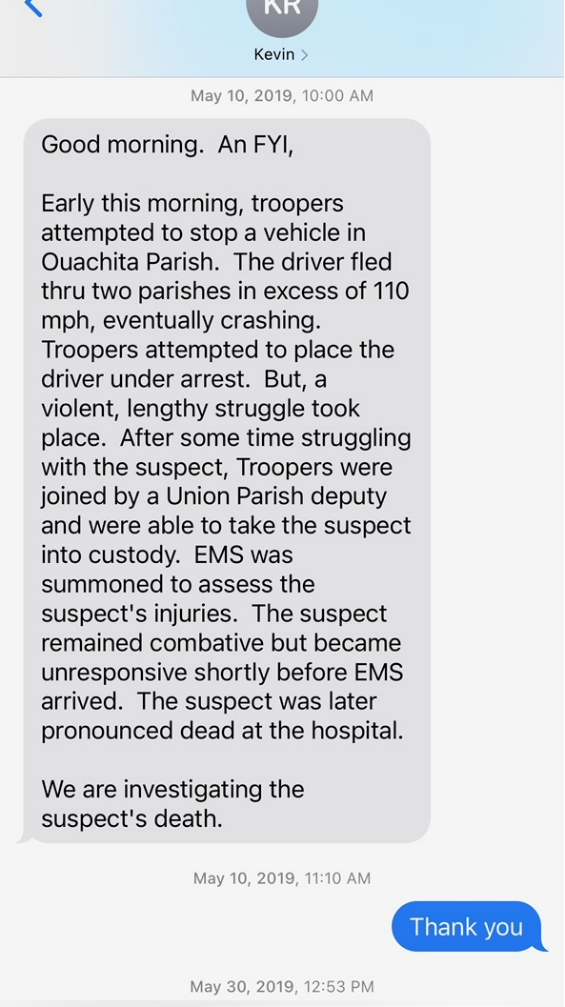 In an unusual move, the US Attorney's office broke standard policy on not commenting on ongoing investigations to suggest it was not focused on the governor as part of the State Police cover-up probe.

"While the investigation continues, recent reporting citing sources suggesting that the FBI has questioned people about the awareness of certain facts by Governor John Bel Edwards is inaccurate," a US Attorney spokesperson said in a statement Monday afternoon.

In an Associated Press report last week, sources used in the reporting suggested federal agents had questions about the governor's involvement in the case: "The FBI has questioned people in recent months about Edwards’ awareness of various aspects of the case, according to law enforcement officials who spoke on condition of anonymity to discuss the probe," the AP reported.  It added, "investigators have focused in part on an influential lawmaker saying the governor downplayed the need for a legislative inquiry."

The statement Monday from US Attorney Brandon Brown in the Western District of Louisiana was a rare move by federal agents to add a narrative to an ongoing investigation.