Wednesdays bust, umbrellas no longer a must

Isolated showers and thunderstorms remain possible through Friday. Don’t go canceling plans though as activity will be scarce.

Yikes. Wednesday’s forecast did not play out as expected. The forecast called for “scattered” activity mainly north of Baton Rouge and I-10. Measurable rain was anticipated for 40 percent of the WBRZ Weather Forecast Area. Instead, a widespread shield of rain overtook more than 70 percent of the 13 Parishes and 3 Counties. Only Assumption and St. Mary Parishes stayed primarily dry.

My forecast for “scattered showers” and “not a washout” pic.twitter.com/lWRlwh5s6s

Radar estimated amounts as high as 2 to 3 inches just south of I-10 through Iberville, East Baton Rouge, Ascension and Livingston Parishes. Why did this happen? The weak, slow-moving front stalled just about 50 miles farther south than expected. Nobody said it was easy.

Today and Tonight: Thursday should work out to be a little drier than Wednesday with showers and thunderstorms only in the isolated category for the WBRZ Weather Forecast Area. Some more sun will be available too allowing high temperatures to climb into the low 80s with southeast winds of 5-10mph. Overnight will be partly cloudy and still a spotty shower cannot be ruled out. Low temperatures will be muggy in the upper 60s. 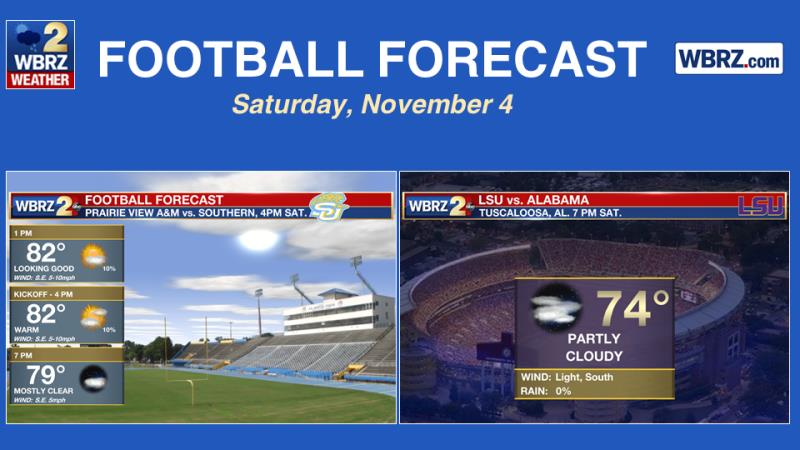 Up Next: Friday will trend even drier with temperatures running very close to the numbers realized on Thursday. For the weekend, rain chances can be all but eliminated. Expect partly sunny skies with highs in the low 80s and light, south winds. Nights will feature mostly clear skies and above average low temperatures in the low to mid 60s. This means the Southern Jags game at home in Baton Rouge will have no weather related issues this weekend. In Tuscaloosa, the weather is looking cooperative for the Tigers and the Tide. Game time temperatures will be in the mid 70s beneath mainly clear skies. Dry, warm weather will continue into early next week.

November & December inspire thoughts of cooler temps, but remember that severe weather can be a threat! #LaWX #MsWX https://t.co/VAWYm2vRix pic.twitter.com/qimJDjeiz1 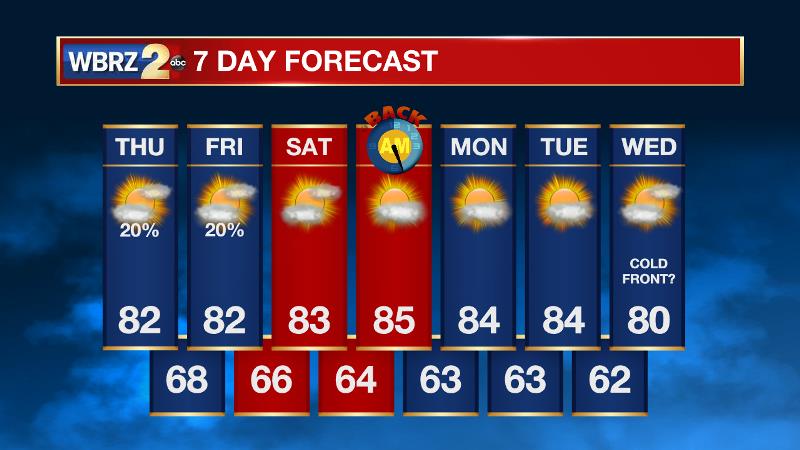 A broad upper level trough will erode through Thursday and as a result, so too will a stalled front parked across CENLA. As a ridge begins to build in the southern Gulf of Mexico, some lobes of energy riding around the northern periphery of this ridge may be able to trigger the development of some showers and thunderstorms across the central Gulf Coast. The most vigorous of these lobes appears to come on Friday afternoon/evening with an embedded shortwave in the jet stream to our north. The only question is if whether or not enough moisture will be available. Given the limited moisture fields shown by forecast models, expect rain coverage to remain low. Over the weekend, the ridge will build north, effectively ending precipitation development and warming high and low temperatures a good 5 to 10 degrees above average. Mild and benign conditions are anticipated early next week before the next storm system returns a chance for showers and thunderstorms by Wednesday or so. Forecast models hint at some sort of front moving through the area to bring highs back into the low 70s and lows into the low 50s by the end of next week and next weekend.