Very little rain in the forecast, Tropical development likely in the southern Gulf

Local conditions are expected to be calm, but we are closely tracking a tropical disturbance in the southern Gulf of Mexico.

Today and Tonight: Partly cloudy conditions continue today, but rain chances are very low. A few coastal showers may move inland over St. Mary and Assumption parishes, but they will not be long-lasting. Temperatures today will be near 88 degrees and overnight temperatures will cool to near 71.

Up Next: All eyes are on potential tropical development in the southern Gulf of Mexico. A cold front is set to push south through Louisiana starting tomorrow. The behavior of this front will determine much of our weather pattern for the rest of the forecast period. As of now, it looks like this front will be successful in holding off major rain chances to the extreme coastal areas through the weekend, even if a tropical depression forms in the southern Gulf of Mexico. This can still change, so we will continue to watch it very closely. In the meantime, you can expect high temperatures in the mid 80s and lows in the mid 60s.

Tropical Depression Sally continues to drop heavy rain over Georgia and the Carolinas but is now moving faster, near 12 mph off to the northeast.

Hurricane Teddy and Tropical Storm Vicky are still active out in the open Atlantic and are not expected to impact the United States. There is an area to watch over the southern Gulf of Mexico that is already producing showers and storms, and it is very likely to form into a tropical depression later today. 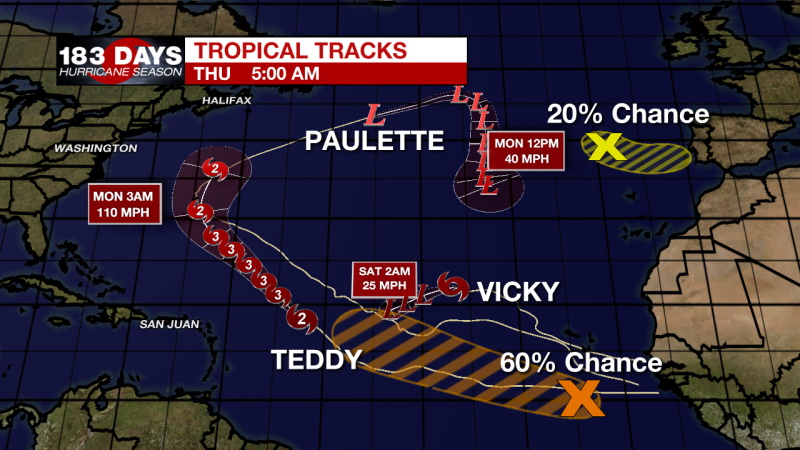 At 400 AM CDT (0900 UTC), the center of Tropical Depression Sally was located near latitude 31.8 North, longitude 85.7 West. The depression is moving toward the northeast near 12 mph (19 km/h), and a northeastward to east-northeastward motion is expected into Friday. On the forecast track, the center of Sally will move across southeastern Alabama this morning, over central Georgia this afternoon and evening, and move over South Carolina late tonight into Friday. Maximum sustained winds have decreased to near 30 mph (45 km/h) with higher gusts. Additional weakening is forecast during the next couple of days, and Sally is expected to become a remnant low by tonight or Friday morning. The estimated minimum central pressure based on nearby surface observations is 1000 mb (29.53 inches).

At 500 AM AST (0900 UTC), the center of Hurricane Teddy was located near latitude 18.3 North, longitude 52.3 West. Teddy is moving toward the northwest near 12 mph (19 km/h), and this general motion is expected to continue through the weekend. Maximum sustained winds are near 105 mph (165 km/h) with higher gusts. Additional strengthening is forecast during the next couple of days, and Teddy could become a major hurricane Thursday night or Friday. Hurricane-force winds extend outward up to 35 miles (55 km) from the center and tropical-storm-force winds extend outward up to 255 miles (405 km). The estimated minimum central pressure is 970 mb (28.65 inches).

At 500 AM AST (0900 UTC), the center of Tropical Storm Vicky was located near latitude 21.9 North, longitude 36.7 West. Vicky is moving toward the west-northwest near 7 mph (11 km/h). A turn to the west is forecast later today, followed by a west-southwest motion on Friday. Maximum sustained winds are near 40 mph (65 km/h) with higher gusts. Weakening is forecast, and Vicky is forecast to become a tropical depression later today and a remnant low by tonight. Tropical-storm-force winds extend outward up to 35 miles (55 km) from the center. The estimated minimum central pressure is 1008 mb (29.77 inches).

Thunderstorm activity has continued to increase and become better organized this morning in association with a well-defined low pressure system located over the southwestern Gulf of Mexico. Upper-level winds are gradually becoming more conducive for development and, if this recent development trend continues, a tropical depression or a tropical storm could form later today. The low is expected to meander over the southwestern Gulf of Mexico for the next day or so before moving slowly northward to northeastward on Friday and Saturday. An Air Force Reserve reconnaissance aircraft is scheduled to investigate the disturbance this afternoon.

An elongated area of low pressure located a few hundred miles south-southwest of the Cabo Verde Islands is producing disorganized shower and thunderstorm activity. Environmental conditions are expected to be conducive for development during the next few days, and a tropical depression could form before upper-level winds become less favorable over the weekend. The low is forecast to move west-northwestward at 10 to 15 mph during the next several days.

A non-tropical area of low pressure is located over the far northeastern Atlantic Ocean a few hundred miles east-northeast of the Azores. This system is forecast to move east-southeastward and then northeastward at about 10 mph over the next day or two, and its chances of acquiring some subtropical characteristics before it reaches the coast of Portugal late Friday appear to be decreasing. For more information on this system, see High Seas Forecasts issued