Mild conditions will continue until a cold front arrives on Thursday. We will keep them coming with at least one more crossing by early next week.

Next 24 Hours: The overnight hours will be mostly clear and mild with low temperatures struggling to meet 60 degrees. A touch of fog is possible around daybreak Wednesday, but it is less of a concern than it was on Tuesday morning. While a few more clouds may be around, any areas that receive a period of sunshine could cross 80 degrees. Additionally, some isolated, brief showers could develop in the afternoon and evening. 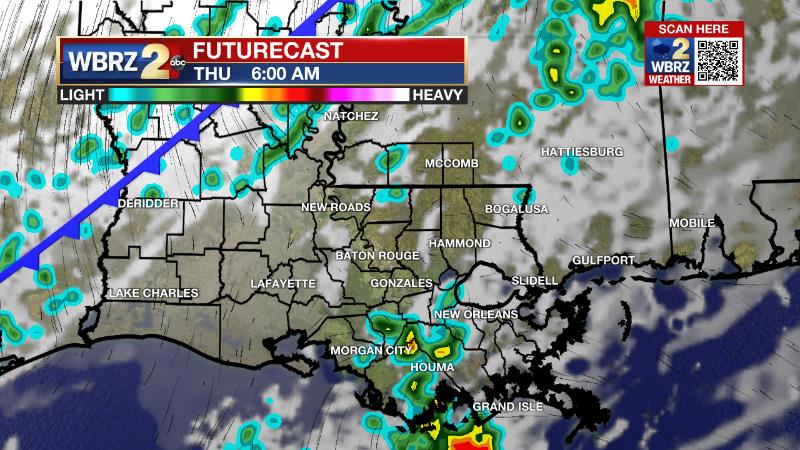 Up Next: A cold front will move into the area on Thursday morning. This will bring a patch of light rain across the area through Thursday afternoon. Being another weaker system, it would not be surprising if many areas miss measurable precipitation. It will just as quickly clear for quieter weather to end the week and start the weekend. Winds will become northerly behind the front and send temperatures on a dip Friday and Saturday. This air mass does not look nearly as chilly as last weekend and temperatures will be just a few degrees below average highs and lows of 71 and 47. After starting in the low 40s, highs will reach for the low 70s Saturday afternoon. Another cold front is pegged for Sunday night. CLICK HERE for your full 7-Day Forecast.

The Tropics: For the Gulf of Mexico, Caribbean Sea and North Atlantic, tropical development is not expected over the next five days. For the latest tropical forecasts, advisories and information, visit the WBRZ Hurricane Center as we finish out the 183 Days of Hurricane Season.

The Explanation: A surface high pressure system will continue to move east into the Southeast corner of the country through the middle of the week. Of course, the resultant southeast winds at the surface will gradually bring some moisture into the low levels of the atmosphere. Some patchy fog remains possible on Wednesday morning although temperatures may not quite cool enough for it to be a big issue. With the lower levels steadily warming, any sunshine will allow afternoon thermometers to push 80 degrees on Wednesday. Also of note, enough moisture may become established for a few light showers to develop in the afternoon, a trend that has been steadily captured by high resolution models since Monday. An upper level trough of low pressure will move across the northern half of the country on Thursday and send an attendant cold front into the local area. Enough time will have passed for moisture recovery to support a few showers until the afternoon frontal passage. However, with the front being weaker in nature and the upper level system being much farther north, the threat for heavy rain and severe weather will once again be low, fortunately. Some cooler air will work in behind the front as winds shift north. Lows will retreat to the 40s on Friday and Saturday morning but will not be quite as cold as the previous front. Wind flow will briefly become easterly ahead of the next upper level system and front move into the Eastern U.S. later Sunday. With only three days between systems, moisture recovery will be limited and so too, will any showers. A slightly colder air mass will arrive behind that front for the middle of next week.