Tropical Storm Michael Forecast to Intensify in the Gulf

Tonight and Tomorrow: Spotty drizzle will linger in the area until around 8 PM, as clouds break later this evening. Winds will stay light out of the east, as temperatures drop to an overnight low of 71°. Isolated showers return on Monday, an appetizer to the wet beginning of the week ahead. Temperatures will still be hot, reaching around 88°, but this should be the last above average high temperature in the foreseeable future. Pockets of showers in the morning will mainly stay along the coast, but isolated showers and a storm or two will push inland through the afternoon and linger until around 7 PM. 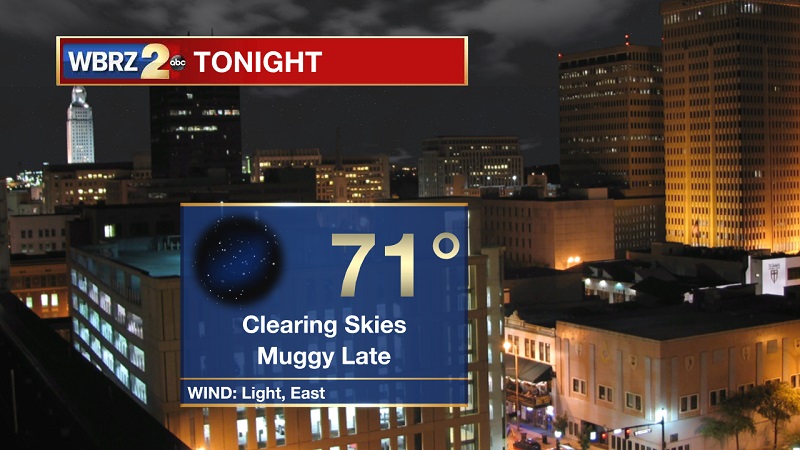 Up Next:  A lot of changes are in the forecast. A very wet and stormy start to the week, will lead to a cooler and much drier weather pattern that will set up Thursday and stay with us through the weekend. 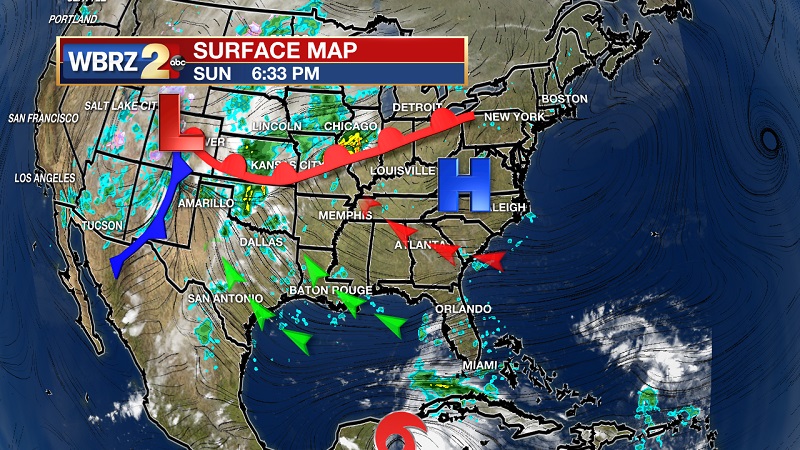 Tropical Storm Michael intensified from tropical depression status earlier today, and is poised to move into the Gulf in the coming days. It is currently about 105 miles east-southeast of Cozumel, Mexico and about 135 miles south-southwest of the western tip of Cuba. Michael has sustained winds of 60 mph, and is moving north at 5 mph. A northward motion with some increase in forward speed is expected over the next few days. On the forecast track, the center of Michael will move over the Yucatan Channel on Monday, and then across the eastern Gulf of Mexico late Monday through Tuesday night, and approach the northeastern Gulf coast on Wednesday. Additional strengthening is expected during the next few days, and Michael is forecast to become a hurricane Monday night or Tuesday. Currently, models are anticipating continued strengthening as he approached the Florida coast as a category 2 hurricane.

*Current Tropical Storm Warnings are in effect for:

-The coast of Mexico from Tulum to Cabo Catoche, including Cozumel 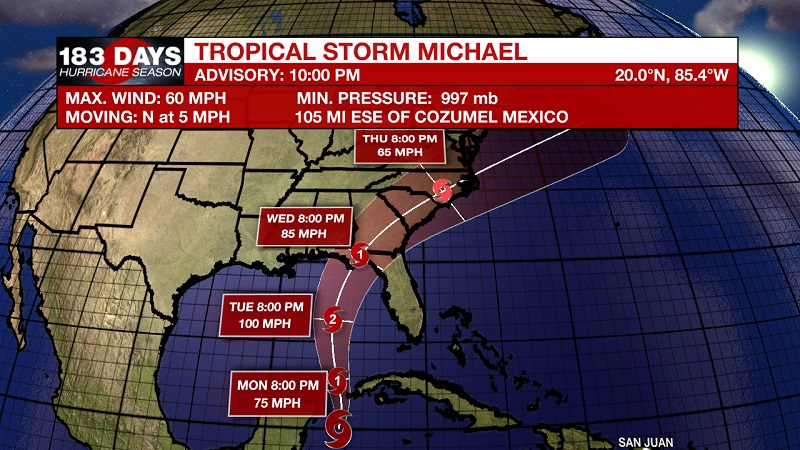 Tropical Storm Leslie is still spinning well out in the Atlantic, with little change in speed or strength. Currently located about 930 miles east-northeast of Bermuda and 1230 miles west of the Azores. It has sustained winds of 50 mph, and is moving east-southeast at 13 mph. This general motion is expected to continue for the next several days, with Leslie moving across the open central and eastern Atlantic during that time. Small fluctuations in intensity are possible for the next day or so, and Leslie is expected to remain a tropical storm for the next couple of days. By mid-week, some strengthening is anticipated and Leslie could be near hurricane strength on Wednesday or Thursday. 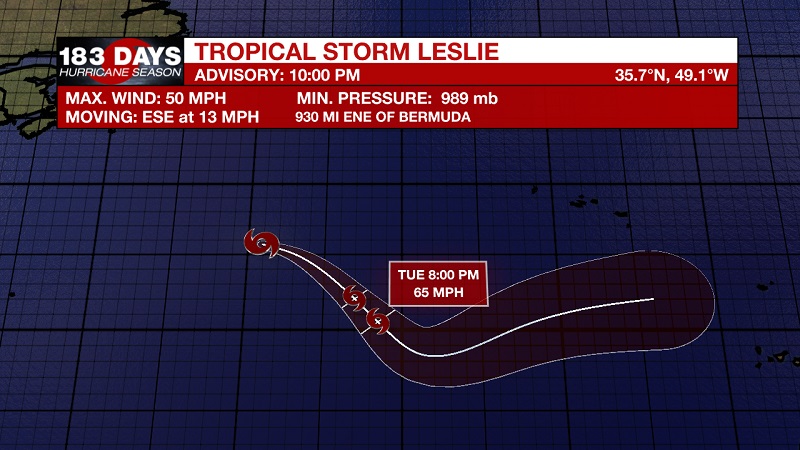 We are also keeping our eyes on two tropical waves that could develop into tropical systems. The first is an area of disturbed weather associated with a tropical wave that has formed a few hundred miles south of the Cabo Verde Islands. Conditions appear to be favorable for some development during the next few days as the system moves westward across the tropical Atlantic. The National Hurricane Center is forecasting a 20% chance of tropical development within the next 2 days, increasing to a 30% chance within the next 5 days.

The second wave is a broad non-tropical low pressure system that is located a few hundred miles south of the Azores, and has become disorganized and conditions are no longer favorable for development. The National Hurricane Center is forecasting only a 10% chance of tropical development within the next 5 days.

The heat continues into the workweek, but it will not be staying for long. The first intact cold front to break into the Gulf is on its way from the west, but Tropical Storm Michael is also approaching from the Gulf. These two systems will bring ample moisture and storms across our area through the beginning part of the workweek, as well as cooler high temperatures that will stay in the low to mid 80s. The timing of this first cold front of the season could not be better, because it will actually help to protect us from Michael, by pushing it more east into the Florida Panhandle Wednesday afternoon as a forecasted category 2 hurricane. Michael is forecast to retain tropical storm status through Georgia, South Carolina, and North Carolina, before exiting into the Atlantic on Friday. We will reap the benefits of conditions behind the frontal system beginning on Thursday, with drier and cooler temperatures that are set to linger into the weekend. We can expect abundant sunshine, highs near 80°, and overnight lows that will hover around 60°. Get ready to bring your sweaters back out, it looks like fall is finally here!