It is hurricane season hump day—the climatological peak of activity and things are characteristically busy across the Atlantic Basin. Two disturbances being watched for the Gulf have low to medium formation chances but could bring times of heavy rain to parts of Louisiana and Mississippi over the next 7 days, especially south of I-10.

As of 4pm Thursday, Tropical Storm Paulette was drifting west-northwest in the central Atlantic with 50mph winds. The storm is expected to approach Bermuda as a hurricane early next week. Tropical Storm Rene was moving west-northwest in the far eastern Atlantic with maximum winds of 50mph. Rene will likely become a hurricane over the next few days and turn northwest into the central Atlantic. Neither of these systems poses a threat to the Gulf Coast.

A tropical wave southeast of the Cabo Verde Islands has been producing disorganized showers and thunderstorms. Gradual development of this system is expected and a tropical depression is likely to form by the end of the weekend while the system moves generally westward across the eastern tropical Atlantic. The next wave that will emerge off the African continent has a 40 percent chance of development next week. 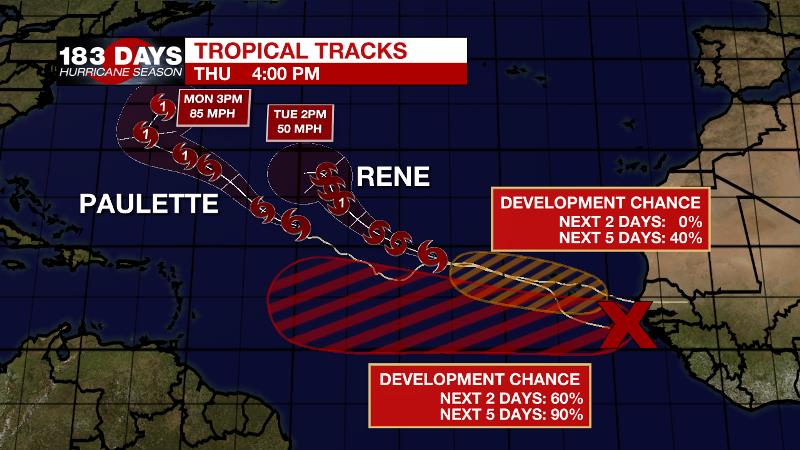 The Next 24 Hours: Into Friday, expect mostly clear skies with lows in the low 70s. After plenty of sunshine to start the day, after a midday high in the low 90s, a fast return of moisture to the atmosphere will result in scattered showers and thunderstorms. This will signal the beginning of an active pattern.

After That: If you have outdoor plans this weekend, keep the WBRZ WX App. handy as scattered to widespread showers and thunderstorms will be in the forecast. In fact, this general pattern will hold right through the middle of next week. Even though afternoons should be the prime time for activity, the deep tropical moisture and presence of a few disturbances moving across the northern Gulf means that some mornings could have rain as well—especially Saturday, Tuesday and Wednesday. To glean some positives from this—as long as the systems do not become well organized—the rainfall is needed and it will keep highs in the 80s rather than 90s. Lows will still be muggy and in the 70s.

The Explanation: On Friday, a tropical wave drifting across the north-central Gulf of Mexico will battle an upper level ridge of high pressure to our north. While the moisture should win out to produce scattered showers and thunderstorms near coastal areas, there will likely be a cut off in rain coverage especially north of I-10/12 due to drier, sinking air from the ridge. Over the weekend, an upper level low moving out of the western U.S. into the Great Lakes region will knock down the upper level ridge, which led to some drier times. Also, atmospheric moisture will increase to well above average levels over the weekend and these factors will begin multiple rounds of rain and thunderstorms. 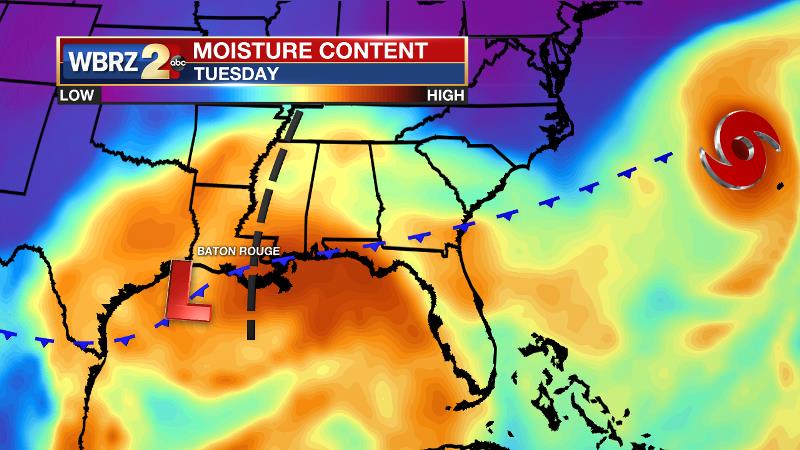 In addition to these upper level features, a tropical wave approaching from the east will interact with a stalling front to the west to enhance showers and thunderstorms on Saturday. Activity may develop through the day as a result. Once the front diminishes and the wave will drifts south, Sunday and possible Monday will remain busy but primarily in the afternoons. Late Monday through Tuesday another front from the northwest and tropical wave from the east will combine for active periods, not limited to just afternoons. The good news is, the interaction with these weak fronts should prohibit and significant strengthening of the two systems. The bad news is, with scattered to widespread showers and thunderstorms Saturday through the middle of next week, any areas that receive repeated rounds of heavy rain may have to contend with street and poor drainage flooding.